By Alex Talcott on June 29, 2015Comments Off on An Interview with Gov. Jim Gilmore Homeland Security in the Hometown of a Flying Ace PART I 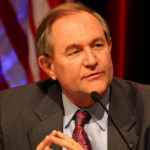 Dover, New Hampshire’s McConnell Center is named for the late Air Force Captain Joseph C. McConnell, a local credited with shooting down 16 enemy aircraft during the Korean War before dying in a test flight. I met there with Cold War era Army intelligence veteran Jim Gilmore, who also served as Governor of Virginia (1998-2002) and is exploring a second run for the presidency.

Forming committees or commissions is made light of as inactivity, a joke. You’re proud of your leadership of the “Gilmore Commission” [Congressional Advisory Panel to Assess Domestic Capabilities for Terrorism Involving Weapons of Mass Destruction, 1999-2003] and mentioned it before your governorship during your announcement of candidacy for president in the 2008 cycle. There was some efficacy to it, as compared to the Simpson-Bowles Commission, with – as of a few years ago you said – 146 of 164 recommendations adopted by the Congress to some extent.

The Commission was highly professional. It wasn’t your typical Washington politicians’ commission. A lot of those commissions are intended to showboat. A lot of them are intended to promote the leadership in some way. And that takes away from the validity or the efficacy of the commission report because people are saying, “Well that’s just the chairman trying to get some press or something like that.” Our commission was a long commission. It was a total of five years. And what that means is that we had plenty of time to hear people, to bring in witnesses, to do investigations. The Rand Corporation was doing its studies. We met periodically. And we were careful. We had a long time. And you can see from the five reports the way we built one on top of the other.

The first report assessed the threat, the second report demanded a national strategy, and the third report actually began to develop the national strategy and all this under the radar. Not even the congressional people that delegated it really cared all that much about it until the 9/11 attacks.

Frankly, the threats are on the page. You can see that our warning was—look, it may not be very easy for the enemy to get a nuclear weapon, but the chance of a conventional attack against this country is highly probable. It was considered highly probable.

People are familiar with stories of the heroism of the NYPD and firefighters of New York, but less so with the first responders to the Pentagon. Can you tell the story of your and their actions on September 11th?

The governor of Virginia has a big-picture responsibility to make sure that the whole state was protected. And that meant that we had to set up the emergency operation center immediately. Therefore you put the structures in place to look for the next attack. I directed that any gunplay in the state be reported immediately to Central Facility. We activated the National Guard. We warned people around the state. We began public communication in order to calm the people and have them understand that people were in charge and they’re working hard to protect them.

The immediate attack – which was a surprise attack, right? – That’s why it succeeded. It was a surprise attack, just like the one in New York. …[I]t killed a lot of people. And there you had to do exactly what we foresaw in the Gilmore Commission report. The responders have to be the police, fire, rescue, and emergency services. That’s what it has to be. That’s what it was at the Pentagon. It wasn’t the federal people that responded. It was the state people. It was local people. The police departments, the fire trucks. Essentially, the fire trucks.

My experience of course was that not only did I do the big picture things in Richmond, but I had to, I went to the Pentagon. I walked into the smoking hole after the fire was out. I saw what was going on. I visited people in the hospital and made sure everybody knew I was doing it, because we wanted to make sure that that people knew we cared about the people who were hurt. They told us the stories. One of the most vivid stories I remember was a burned woman who said that she was sitting at her desk and in the blink of an eye the whole world changed. And she was suddenly consumed in smoke and fire and had to find a way to get out. And you know in a way that’s an allegory for the country. One blink of an eye…

Time has clouded my sense of how quickly after September 11th we came to a privacy and security debate. CSPAN has aired several forums on the topic of privacy and security where you’ve participated [CPAC 2014 – “Privacy and NSA Wiretaps”; the Steamboat Institute’s Freedom Conference – “The Death of Privacy: Does It Matter if the Government Records Every Phone Call, E-Mail and Text Message That You Send?”]. The fourth Gilmore Commission report has that great Benjamin Franklin quote and your conclusion, “We firmly believe that it will not be necessary to ‘give up essential liberty’ to achieve a marked increase in our security.” What facts should people know, about the NSA and its programs, before opining on where to strike the value balance?

I think it’s the duty of our elected officials to understand exactly what’s going on and then to apply appropriate standards. And to the extent that they weren’t, then that has to be corrected. I believe that we have to have proper oversight. We have to have proper rules and proper accountability. But we can’t give up in the ability to protect ourselves from the enemy.

The enemy is trying to make us choose between privacy and liberty and national security.

Now, I have an acute sense as time has gone on, as we have watched the development of ISIS and the deterioration of other parts of the Middle East, and other places as well, that the danger to the United States is very serious. And I think we cannot give up our technological advantages. But that doesn’t mean that you set a standard that says the NSA can just know what everyone is doing. There have to be zones of privacy and a confidence that we have zones of privacy in this country. And I just think we have to be working every day to make those things harmonize. Do not be forced into a choice, one or the other. And just likewise, I think that anybody that says well we just can’t have the NSA doing anything—I think that’s wrong. And by the way, as you know, I’m on the record as saying that I think Edward Snowden was, and is, a traitor.