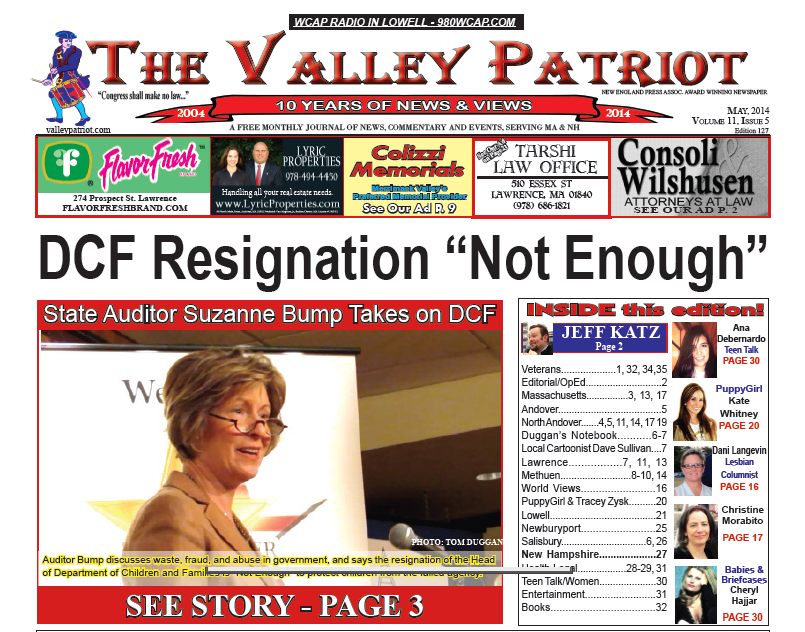 Massachusetts State Auditor Suzanne Bump says, “It’s not enough” that Governor Deval Patrick is replacing the state’s Department of Children and Families (DCF) Commissioner, telling a crowd of women in North Andover last month that replacing the head of DCF would do little to protect children while the policies and management of the agency continues to operate without oversight and resources to ensure children’s safety.

Bump was the guest speaker at a Merrimack Valley Chamber of Commerce luncheon at the China Blossom in North Andover, where she spoke of the need for the failed state agency to provide social services as a safety net for children, but added that having little or no oversight of the agency is a recipe for failure.

Bump spoke of government accountability and the need for more oversight in state agencies, particularly in DCF where 134 children in DCS custody, (under Governor Deval Patrick’s care) have gone missing. Recently, two children have turned up dead as the result of DCF failures, and a 15 year old Connecticut girl, Justina Pelletier, has been taken from her family and abused and neglected while in DCF custody

“We all agree that the better response, rather than shredding the social safety net is to install leadership in those agencies with the commitment to program integrity, to overhaul the agency’s staffing and systems and put them in a stronger place at the outset to keep fraud from occurring,” Auditor Bump said.

“The same can be said frankly, about the Department of Children and Families, which we have seen over the past few months, is failing in its’ mandate of keeping kids safe. We audited the foster care program. It was an audit that began long before the disappearance of Jeremiah Oliver.

We found a program, the foster placement program, without basic resources to ensure that children, for instance, weren’t getting medical examinations when they were being placed in foster care. We found that background checks were not being performed before the kids went into those foster care settings either.

As you have read, it has been inescapable to read about the controversy around who should be leading that agency. The governor has decided to agree with many that new leadership is required there. But simply putting a new person in charge of that agency is good, but it’s not enough to ensure that the deficiencies in that system are going to be corrected.

Lots of folks are running for office right now, you hear lots of them talking about the need for accountability; it’s a very popular catch phrase especially since we have seen over the last several years, political groups on either end of the political spectrum, from the Tea Party to the Occupy Wall Street movement, calling for more accountability in government.

But to me, accountability isn’t just the idea that government owns up to and explains it’s decision making, [or] that it takes responsibility for its’ failures. Real accountability has to be an active front-end function, not an after-the-fact acceptance of responsibility for misspent money or failed programs. It means that we have to develop and use new data to forecast needs and risks. We have to stick to objectively identified priorities in the face of political pressure.

It means we have to staff agencies with oversight professionals and compensate them appropriately. It means the introduction of new technologies that can help us reduce the risk of misspending and fraud. And it means honest performance assessment, not just of people but of programs.”

We asked Auditor Bump what the state should be doing to make DCF more effective so that kids are safe and neither they, nor the parents or foster parents, are abused by state workers who may have a god complex or take advantage of the system.

“What we saw when we conducted the audit of the foster care program, and what we are understanding to be common elements of deficiencies across the whole of that agency is that in fact, it is under-resourced.

I’m not saying that it doesn’t have the right number of staff, but it’s not spending its’ money clearly in appropriate ways.

It may well need more money, but from my way of thinking, you start with the foundation. What are the essential tools that that agency needs?

Well, it needs good technology, so that social workers are not having to spend literally hours at their desks trying to get information into the system, and trying to get information out of the system. They have antiquated technology that doesn’t work. It doesn’t allow them to go into the field with that technology. That very basic resource that the rest of us, particularly those of you in the business community know you can’t function without, is unavailable to the social workers to facilitate their work.

They also do not compensate their staff efficiently. One of the Boston publications pointed out that most of the social workers there are unlicensed. Indeed they are. You don’t necessarily need a license in order to do this work, but you are certainly not going to attract licensed social workers at the wages that they pay there.

They also don’t have enough resources devoted to oversight.

Managers have too many people and too many projects to manage in order to provide effective oversight. They don’t have enough training capacity either, to make sure that everything is being done according to their procedures. They haven’t had enough time frankly, in recent years, as their budgets have been severely cut, to do enough information exchange within the agency so that everybody is working towards the same goals and has a voice in how best to run that agency.

So, new vision and new leadership for the agency is essential, but the resources to do the job are equally important.”

Asked if DCF should have an internal affairs division like police departments have to investigate those in DCF who abuse their authority or neglect children or act inappropriately, Bump said that there is an agency that is supposed to do that, but they are not doing it.

“There is an Office of Child Advocacy that is supposed to be doing some of that work. But, I will tell you that what we are seeing across from state government is that … particularly with the recent recession but it goes back [further] … in an effort to live within budgets, the available revenues, in an effort to keep focused on programs, to keep the services flowing, agencies all across state government have cut oversight personnel.

There used to be many more people doing that kind of job in state government but they aren’t there anymore, across agencies. So, you don’t have basic assessments of what the risks are inherent in your job.

Lots of agencies, like a business, you have an internal control plan. [You have to say], this is where we want to go, this is what we need to do in order to get there, and these are the things we have to guard against. There isn’t enough effort put into the things we have to guard against, and these are the precautions that we have to take in order to ensure that people are properly served, or that money doesn’t go astray.’

It’s that basic bureaucratic infrastructure that we have been whittling away at.”

You can think back to the big dig, or more recent issues like the Merrimack Valley Education Collaborative scandal, or our discovery of a $100M discrepancy of the MBTA’s automated fare collection system.

What do they have in common?

In each instance, the overseers of this public activity actively gave away their oversight. They knowingly decided to let other entities become responsible and drive essential decision making.

I have been a legislator; I have been a cabinet member. I know there is little glory to be gained by prioritizing spending on bureaucratic infrastructure. But, I think we are all familiar with the expression ‘penny wise and pound foolish’. Putting all available spending into programs without sufficiently funding administration and oversight is a classic example of the wisdom of that proverb.

On a personal, political note, some people have been surprised by some of my work.

And they see me doing what I do with the audits, and the type of audits that the office is now conducting and they see that being done in spite of the fact that I am a Democrat.

The reality is, that I am doing this work, especially in the areas of human services and public assistance program spending, (which frankly is where most of our money in state government is going) because I am a Democrat.

I want people to believe in government. I want them to see that government is capable of self-examination, and self-correction. And I believe that one of the original members of the Tea Party, the Revolutionary era patriot Thomas Paine was right when he said: ‘A body of men holding themselves accountable to nobody, ought not to be trusted by anybody.’

I think that motivates the work that Tom Duggan does here with The Valley Patriot. Just a few moments ago, I was honored to have him recognize some of the work that we’ve done around public assistance, fraud and abuse. I had been unable to join him at the tenth anniversary dinner of his publication and he was kind enough to come up today in order to present me with my [1st Amendment] award.

Thomas Paine had it right and I think if we all embrace this notion of accountability as a necessary investment in our Commonwealth then it will be a major step forward in building the public trust.”

Instead of embracing Bump’s objective financial report, Governor Patrick has chosen to quibble over some of the more meaningless numbers released in the audit. He, as well as several Democrat elected officials, attacked Bump with the help of the Governor Patrick’s cheerleaders at the Boston Globe.

Bump refused to back off or sugar coat the results of her audits showing fraud, waste and abuse under the Democrat party’s leadership of state agencies and continues to expose the failures of those state agencies.