By Paul Murano on December 17, 2014Comments Off on Black Lives Matter ~ BENEATH THE SURFACE WITH PAUL MURANO 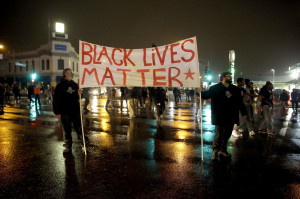 As I witnessed a bit of the mayhem of protesting the latest fatal police action within the black community – the rioting, the peaceful marching, and the sitting on the nation’s highways – I noticed this sign held by a protester: “Black Lives Matter”.

Instead of thinking about whether this particular verbal protestation was fitting in response to the recent police actions, my mind went to a place to which readers of this column would not be at all surprised. It is a place where reason led me, and, as I see it, where reason ought to lead everyone.

As of this writing, since Michal Brown died in Ferguson, Missouri on August 9th, 1062 black babies have been intentionally killed before their birth in Missouri. No riots. No protests. No laying down on highways. That’s nine African-American babies each day in Missouri alone, and counting – their lives unjustly taken. Each of those babies was just as valuable as Michael Brown. None of them got the opportunity to live twenty years like Michael did. None of them attacked a police offer, resisted arrest, or broke the law in any way. These black males and females were unjustly killed, not with a gun but an abortion knife and suction machine.

It is legal in this country to kill Trayvon Martin, Michael Brown, and Eric Garner – as long as they are still in their mothers’ wombs.

According to the CDC, 78% of babies killed by abortion in NYC in the year 2011 were black or hispanic. According to blackgenocide.org, an organization run by African-Americans who truly care about justice, 1,876 black babies on average are aborted every day in the United States. And according to the Alan Guttmacher Institute, black women are more than five times as likely as white women to have an abortion.

In this season of Advent and Christmas we are reminded of the baby Jesus in the manger, the baby who literally changed the world. We recall the humanity of the baby Jesus as an embryo at the Annunciation (Lk 1:34), as a fetus inside His mother Mary inspiring the fetus John the Baptist to leap in his mother’s womb (Lk 1:41), and as a helpless infant (Lk 2:7) needing His mother and Joseph to lead Him through the early travails of this life.

Advent is a time to be more aware of our need for a Savior. If our vices and addictions don’t do it, and our broken and strained relationships don’t do it, then hopefully the following fact will: that each of us will die in a relatively short time and will be answerable for our lives, including why we ignored “the least ones” (Mt) in a society that kills over one-third of all human beings God creates before birth. Unless our society acknowledges a higher power that became a dependent baby, and admits it needs this Savior to overcome its slavery to selfishness, it will not overcome its current addiction to sex that ‘demands’ such a slaughter of innocents. Countless Michael Browns will continue to die before birth, their lives unjustly taken from them before they have a chance to make choices for themselves. The mainstream media doesn’t care because it doesn’t fit their narrative. The world of academia will continue to provide dens of inequity called “dorms” and ignore Planned Parenthood targeting minority neighborhoods to make their numerous abortions for money.

The good news is that there is hope. The “happily ever after” that is planted in every human heart is attainable because God lowered Himself to become one of us, to take the hit for us and enable us to be reconciled with God, who is the only way to fulfillment. Merry Christmas to all – no matter your race or ethnicity – and may the embryo, fetus, and infant Jesus bring you great blessings this season in your hope for true happiness and peace.