By Tom Duggan on August 1, 2017Comments Off on Boxford PD Blues: PART III: Chief Riter on the Record 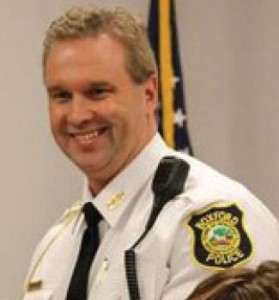 This is the third part of our series on the changes in the Boxford Police Department.

For this segment, we interviewed Police Chief James Riter on about our previous reports and where he sees the department going under his new leadership.

“When I took over I knew it was going to be a challenge,” the Boxford Chief told The Valley Patriot.

“We’ve lost about 150 years of police experience in my first year alone with all the retirements. I knew it would be a challenge with so many guys leaving as I became chief. The process of rebuilding the department was going to mean change, and change usually means controversy.”

“There was a period of change, and people don’t like change, and people get suspicious about things, but I knew the direction we had to go in. I had to focus on putting all these pieces together. I knew some areas we could have handled better and I think you covered those in your previous reports.”

“As far as training goes, the town paid for 2,335 hours of additional training for officers in the department just this year, not including having one guy in the academy. This is full service training; weapons training, detective school, training in school safety, use of Tasers, suicide prevention, domestic violence, impaired driving classes, juvenile issues, all the thing we have to do in the daily tasks of providing modern policing to the Town of Boxford. All the officers with specialties and specialized training have retired. So, when people filter out and retire, those jobs open up, and people move up the ranks. Just about every task of the department; drug team, sex offender grants, recordkeeping, fleet maintenance, elder affairs, all had to be reassigned to different officers, so it was quite a year.”
Riter says as soon as he was hired on as chief, he started the process of contracting with an outside company to do the sergeants exam so that two sergeants could be hired. He also had to outsource other tasks.

“When the new Chief on came on board about twenty years ago, in his first 5 years on the job he hired one new officer. When Chief Murphy was here he hired one officer in four year. In my first year alone I appointed four full time officers and there’s still one open position. We are doing a good job with it. I just don’t want to have a whole department on a weekend being staffed by probationary police officers; it’s much better to have more experienced officers there patrol and help restructure the department.”

Riter says he jumped into the accreditation process for the department right away, getting policies and procedures redone, revamping the computer tech abilities of the department, going paperless to save money, and getting more information out via social media to educate the public.

Chief Riter says that the one issue he had with The Valley Patriot’s previous reports was the claim that the Boxford police have a secret computer server which is not subject to public records requests.

“I think there was an incorrect understanding by people in town, that because this was an internal server for internal use that it was a “secret server” and not subject to public records requests. But, if you send us a public records request for any information on that server we are going to give it to you as long as it is considered a public record. We have nothing to hide here, and I know rumors spread when people don’t know the real facts. So, I just want to convey to your readers that, that part of the story was not correct. Yes, we have a separate computer server for internal communications, but any information on that server is subject to the same laws as any other run by the town.”

The one goal Chief Riter said he wanted to focus on in the next year with all that has transpired, is to focus on educating people about the Veteran Criminal Court. The Valley Patriot will explore that in more detail in the coming months.

Editors Note: The Valley Patriot has put Chief Riter to the test on this and has officially submitted a public records request for all electronic communications to and from famed attorney and ambulance chaser Wendy Murphy in an attempt to clear up some unanswered questions in the Erin Cox scandal.