By Tom Duggan on January 29, 2017Comments Off on Boxford PD Blues ~ What Are They Hiding in Boxford? 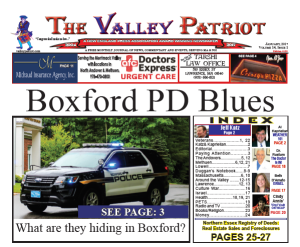 For the last few months, The Valley Patriot has been sifting through dozens of complaints about the police chief and the inner workings of the Boxford Police Department. In any case where accusations are made against a public official, we requested public records, interview people involved, go to the town for personal observations of people involved, and reach out to experts in other towns for a better understanding of what are normal procedures and what is abnormal.
What we wanted to determine was whether or not stories about a police department in chaos were true, partially true, or just a bunch of naysayers unhappy with the chief. In the coming series on the Boxford Police we will detail our findings as fairly and objectively as we can.
The chief and the taxpayers deserve nothing less.

After all, if a good cop is being slandered for some political agenda I want to be the very first to get to the bottom of it. Conversely, if there’s a cop, (a police chief no less), who is not exactly on board with the idea that they work for, and answer to the taxpayers, well … that story needs to be told as well.

First, The Valley Patriot submitted a lengthy public records request asking for, among other things:

* 911 calls to the station covering 24 hours of a certain date
* Corresponding radio calls for that same time period
* Police reports showing an incident where a Boxford officer dumped out a citizen’s marijuana on the citizen’s front lawn
* Copy of a recording made by a police Lieutenant during an interview with a member of the public who had filed a complaint against the head of detectives
* A copy of the actual complaint filed by a member of the public against the officer
* The criminal record and activities of a civilian dispatcher (who is related to a former selectman). This dispatcher assaulted someone at the library and surprisingly, the initial arrest report and narrative went “missing”. The dispatcher continues to work at the Department and has since been summonsed to court on another assault charge
* Reports showing reasons that a Boxford police officer stopped someone from recording them, barricaded them into a room and forced them to erase the recording
* Documents on another dispatcher fired for whistle-blowing on the first dispatcher
* Reports detailing the night a Boxford officer tried to have a woman whom he is involved with, committed on a psychological
* Ambulance reports showing why the EMTs refused to commit the woman
* Police officers being put on the road without sufficient training
* Phone calls made to and from the police chief’s personal cell phone when police business was being conducted
* Documents showing police reports being changed long after the fact
* The police chief’s resume and experience, as well as the requirements for the police chief’s position.
* and much more.

n this multi-part series on the administration of the Boxford Police Department we will address all of the issues above and a few more. But, before we even get into the meat of the shenanigans, it’s important to focus on the process of transparency and remind people that the police chief works for the public. He also works for the Boxford Board of Selectmen.

Whether it’s a physical document (like a police report), or an electronic communication (like a text message) … whether it takes place on a personal cell phone, or a personal email server, all communications about the public’s business is considered a public record. 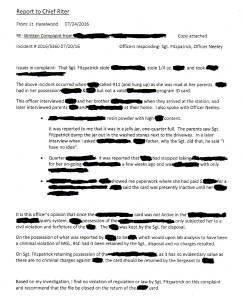 In the responses we received from Boxford Police Chief Riter, he states that some of the records we requested were exempt from the state’s public records law and he was therefore not turning over those documents or records we requested. Other documents he did provide had the relevant information blacked out, but much of the information redacted was public information.
For example: Chief Riter cites the HIPPA laws (medical records are exempt from public records requests) as a reason to black out information from a July 20, 2016 police report where a Boxford officer took a woman’s marijuana, dumped it all over her front lawn, and then illegally confiscated her marijuana card.

In the police report we received from Chief Riter, all references to marijuana in the report, as well as the person’s name and address, were blacked out. Names and addresses are public information on police reports.

No disciplinary action was taken against the officer. The person whose card was illegally confiscated had to go down to the police station several times to try and get it back and eventually lodged a complaint.

As part of The Valley Patriot’s initial public records request, we asked for 24 hours of audio recordings from 911 calls and radio calls to the police cars for the date of July 20, 2016.
The Valley Patriot also sent the same request for 911 calls to other city and town police departments in the area, covering the same 24 hour period that we were requesting from Boxford.
When we compare the responses we got from other departments one thing became clear. Boxford Chief Riter’s response was… unique to say the least.

In Lawrence we were assured there would be a no cost for 24 hours of recordings from their 911 call line except for the cost of a USB storage device.

Methuen police sent a letter saying that there would be no charge for their 911 recordings either… but also added that it would normally cost $180, for the three hours of time it would take to physically copy the recordings for a 24 hour period.

Yet, the response we received from Chief Riter in Boxford was a bill for more than $700 (at his hourly salary times 24 hours) so that he, himself could go through the 24 hours of recordings, one call at a time.

He needs to do this personally, he says, because he is the only official who can listen to and determine what calls from the public, on a public phone line, answered by public dispatchers, recorded on public computers… is not a public record.

The Town of Boxford also wants to charge The Valley Patriot $911.79 to make copies of 24 hours worth of radio calls from dispatch to the police cars.

It surely makes you wonder what the Town of Boxford has to hide.

We have seen this kind of thing before when former North Andover Superintendent Hottle tried to charge thousands of dollars for copies of emails he didn’t want us to have. By dishonestly overpricing the cost of a public record or document, it is the hope of some officials that the person requesting the records will give up on that item because they just cannot afford it. Most do.

Chief Riter is not only concealing public information in police reports and over-pricing 911 calls, The Valley Patriot learned during our investigation that the Boxford Police Department also has an internal e-mail server for internal police communications.

The server does not have a “.gov” address and does not go through the town’s official email system.

Boxford Town Manager Alan Benson said that he was aware of the email server inside the station and that it has existed for about five years.

But, Valley Patriot sources inside the department say that the email server is never searched when there are public records requests, and that officials have openly told officers that because the server has a “.org” address it is not subject to the public records law.

Brian McNiff, spokesman for Secretary of State Bill Galvin’s office confirmed to The Valley Patriot that communications on the Boxford Police Department’s internal email server were subject to public records requests and that his office would handle any appeal should a member of the public be denied access to those records.

Police officials communicate with each other on the server about suspects, cases, shift staffing, and other police actions.

In The Valley Patriot’s public records request, we asked for information that we believe is contained on the internal server concerning harassment and assault by a police dispatcher, but the Town of Boxford refused to turn over such records.

NEXT MONTH: When Police record an interview with a member of the public without their knowledge, and a whistle blower is fired.