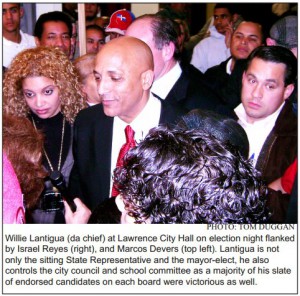 Valley Patriot news spotters in Lawrence City Hall say that the official results for the preliminary elections are being held up because a card reader in one of the ballot counting machines erased data on either another card or the machine itself. Unofficial results called into the Valley Patriot newsroom this evening show that the two final mayoral candidates will be incumbent Mayor Willie Lantigua and Lawrence City Councilor Dan Rivera.

Valley Patriot spotter Rich Russel says that election workers tried to “reprogram” one of the cards that feeds results into the machine and somehow it erased all the results in the machine. Election workers are trying to fix the problem so that official results can be announced in all races. No official results have been announced out of Lawrence City Hall as of this report at 8:48pm.

FRAUD IN THE LANTIGUA ELECTION DEPARTMENT