By Tom Duggan on June 21, 2014Comments Off on BREAKING…. Three Suspects in Custody After Wild Chase Leads to Stolen Cruiser and Threats of “Killing Any Cop I See” 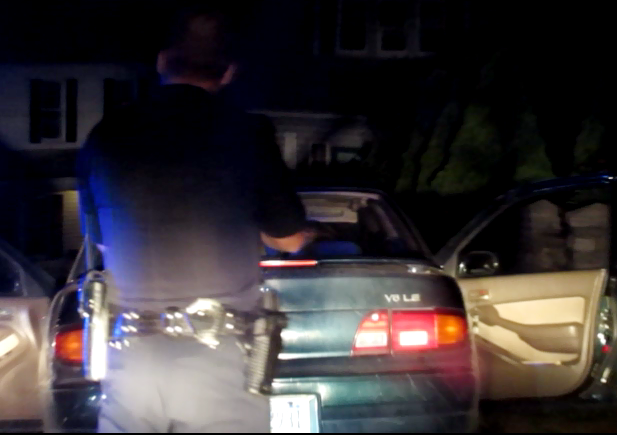 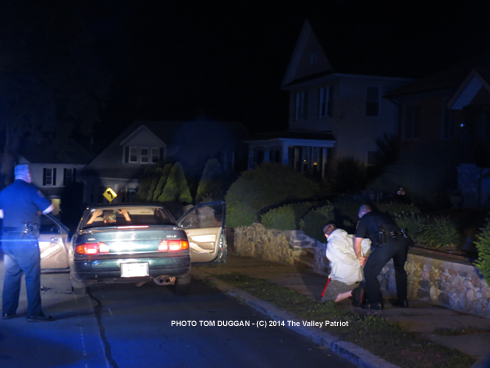 LAWRENCE – Salem NH police lead a chase through the streets of Lawrence early Saturday morning after a Salem Officer was assaulted on a routine traffic stop.

The driver, with at least two other  occupants fled the scene and led police on a chase that landed them on Essex Street in Lawrence at the height of the club activity down town.

The officer who had been assaulted during the stop (Office Adam Pearson), shot the drive with a taser but the driver pulled out the taser wires and fled. Pearson lead the chase down Essex Street, as the driver of the fleeing car sped through red lights, weaved in and out of nightclub traffic, barely missing one pedestrian, and crashing into a concrete median strip in front of MacDonald’s on Essex Street.

There were no civilian injuries during the Essex St. portion of the chase. We have no information if anyone was hurt prior.

The Valley Patriot followed the chase as Officer Pearson followed the suspects to the top of Tower Hill where steel from the blown out tire and skid marks could be seen in the middle of the road. (see photo) 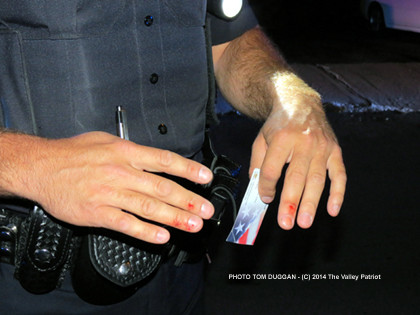 The Valley Patriot caught up to the car stopped on Essex St. just past the intersection of Essex and Nesmith.

The driver of the car had exited the vehicle, assaulted the officer, threatened his life and then jumped into the Salem police cruiser, speeding off towards Water Street.

Officer Pearson drew his gun on the two suspects in the vehicle and called for backup but within seconds a Lawrence police car arrived and the two remaining suspects were arrested. They were held in Lawrence for a brief time and transported back to Salem NH to be booked and processed.

State, Salem, Lawrence and Essex County Sheriff K-9 units scoured the Water St. area and found the cruiser on Merrimack Terrace. Police tried to locate all of the weapons in the vehicle at one time a partial radio transmission was heard calling for an accounting of an automatic weapons and that the suspect had threatened “to kill the first cop I see”. One officer was heard on the radio saying that the suspect had fled near the woods by the Merrimack River.

Police apprehended the suspect about an hour later.

BREAKING…. Three Suspects in Custody After Wild Chase Leads to Stolen Cruiser and Threats of “Killing Any Cop I See” added by Tom Duggan on June 21, 2014
View all posts by Tom Duggan →