By Dr. Charles Ormsby on July 21, 2014Comments Off on Can America Survive Obama’s Treason and the Treason of the Democrat Party? 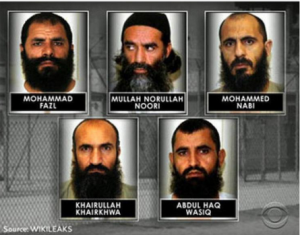 I’m no fan of our President. I’m sure that is clear to anyone who has been reading my articles since his election in 2008. Despite my disagreement with Obama on nearly every issue, I have tried to present a reasoned opposition and avoid excessively negative characterizations of Obama and his policies.

The recent events surrounding the release of five high-level enemy operatives in an exchange for a U.S. defector, and probable enemy collaborator, forces me to describe Obama and his policies in unmistakable, plain language. This recent, unprecedented and inexcusable exchange, which included two terrorists wanted by the International Court for crimes against humanity, will almost certainly lead to the future deaths of numerous innocents – both civilian and military. Don’t be surprised if this includes Americans.

Obama made this exchange, despite the HELL-NO opposition of nearly every high level military and intelligence professional and members of the Senate Intelligence and House Foreign Affairs Committees – including Democrat members. Despite this bi-partisan opposition, Obama has consciously chosen to act in a manner detrimental to the interests of the United States. He has provided substantial and unmistakable aid to our sworn enemies in a time of war. He has acted in a traitorous fashion and, as a result, he deserves the ultimate disgrace of impeachment. Of course the Democrat-controlled Senate will not vote to convict Obama, but if our senators had America’s best interests in mind, they would. Impeachment is not the full extent of what Obama deserves; after a conviction, Obama should face criminal charges. Presidents cannot be above the law.

It is to the credit and resiliency of the U.S. that we have survived this traitor for 2000 days. Somehow we must hold on for another 950.

But is Obama really a traitor? How else can we explain the Obama regime consistently making disastrous decisions that undermine the Constitution and weaken our Republic? Being wrong 7 times out of 10 times could be the result of poor assumptions, a bloated government bureaucracy, or a few bad advisors, but being disastrously wrong 99% of the time can only be the result of conscious intent.

For the first five years of the Obama administration I tried to explain Obama’s illogical policies based on mere incompetence … even idiocy. Recent events have made such explanations impossible. It has become clear that Obama is the Manchurian President. Obama is a full-fledged traitor whose now obvious goal is to destroy the moral foundations of our Republic (individual liberty based on property rights) and eliminate America’s influence in world affairs.
But Obama is not the only guilty party.

It is now clear that a substantial cadre of the administration’s leadership team is equally culpable. These people may have been loyal to the United States when they began their government service or once thought they could harvest the rewards of power without inflicting substantial harm to America, but such excuses can no longer hide their support of a treasonous President.

From economic policies designed to cripple the American economy, to the abuse of power via the Justice Department, EPA, IRS and the NSA, Obama has sought to undermine our economy and reduce our liberties. In just a few short years, Obama has gutted our military and destabilized our ability to protect U.S. interests abroad and our security at home. His leadership team and friendly Democrat legislators are enablers and therefore they all share his guilt. It is imperative that the Democrat politicians who are instrumental in carrying out Obama’s anti-American agenda be rejected by the American people this November and in 2016, so America can return to the principles that made our country great.

The Left often disparages patriotism and polls show that few of their ilk are proud to be Americans (was Michelle Obama the first first-lady to say she had never been proud to be an American?). When one considers that many Germans were patriotic during World War II and many Soviets were patriotic during the Cold War, I can understand why pride in one’s country and patriotism can be suspect. But there are multiple forms of patriotism depending on the underlying emotion or rational.

Consider tribal patriotism, where members of a tribe stick up for their tribe just because it is THEIR tribe. The tribe looks out for them. If their tribe steals some loot they get to share in the booty. The Democrat tribe likes this kind of loyalty … just consider the unions and the army of moochers that sustain them.

Then there is territorial Patriotism. Some are patriotic because they feel an affinity to the land. You know, “Amber ways of grain” and “From sea to shining sea.” Not an unreasonable emotion, but not a justification for the greatness of a nation.
There is also faith-based patriotism. You know, America is great because God loves America the most. We are the chosen ones.

None of these describe my brand of patriotism. I love America because it is founded on the principles outlined by our Founding Fathers: an ideology of individual liberty with a Constitution that was crafted specifically to limit government power and thus protect individual liberty from government excess.

This is the kind of patriotism that the statists, such as Obama and today’s Democrats, hate and disparage. Their goal is to fundamentally change America by destroying individual liberty.

If they succeed, we will lose both our country and our rational justification for patriotism.
Then, those of us who love freedom and liberty will have to enlist as patriots in a new American Revolution.