By Tom Duggan on April 17, 2016Comments Off on Celebrities Greet, Present Scholarship to Market Basket Employees At Valley Patriot BASH 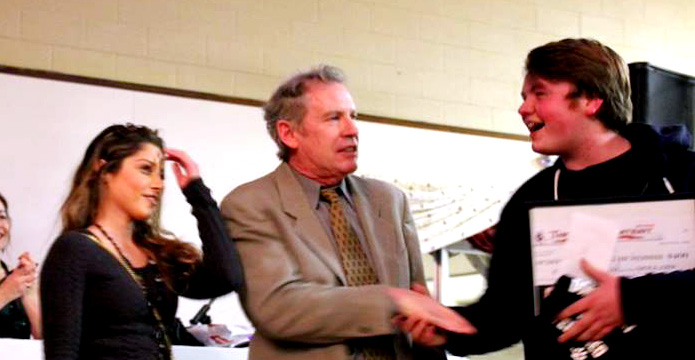 The scholarship was started last year as the newspaper’s way of thanking the Market Basket employees who took a hit to the pocketbook by walking off the job and saving our MORE FOR YOUR DOLLAR STORES.

“Despite the fact that Mr. Demoulas himself won’t even take our phone calls, we believe the community needs to thank him and his employees for showing the rest of the country what good corporate citizenship really means,” Valley Patriot publisher Tom Duggan said. He added that being shunned by Mr. Demoulas will not affect the scholarship in the future and he will continue give the scholarship each year, saying it will always be called “The Valley Patriot/Artie T Demoulas Scholarship”.

MTV’s Brittany Baldi (now with Wicked Bites and the Herald) appeared on MTV reality shows like “The Challenge”, and “Are You the One” as well as several other TV and radio programs. Baldi took the microphone at the BASH to call up each scholarship recipient; Kasey Potvin of Goffstown, NH, (Store #71 in Bedford, NH), Ryan Jackson from Auburn, NH, (Store #66 in Hookset, NH), and Patrick McRobbie, Methuen, MA (Store #6 in Salem, NH).

“The Valley Patriot got more than 36 applications for this scholarship,” Baldi told the crowded room at the Firefighter’s Relief’s In in Lawrence, as her parents looked on.

Turning to the scholarship winners, Baldi encouraged the students to stay in school and get as much education as they can.

“Some of you standing before me could be the next Steve Jobs or inventing the next iPhone. You could own your own basketball team like talented businessman Mark Cuban. Or even become the next professional athlete. College is about learning, studying and starting a new chapter in your lives. But do not forget, it does not stop there. The journey of learning in life continues and I want to encourage you to strive in school but also push yourselves and your soul to it’s ultimate potential.”

“Best of luck and thank you for inviting me again this year.”

Baldi presented each scholarship winner with a t-shirt and also donated the sneakers she wore on The Challenge for The Valley Patriot’s sports auction.

Baldi then told the crowd why each student was receiving the scholarship.

“Ryan Jackson of Auburn, NH works at the Market Basket in Hooksett, NH. He will be attending Bentley University in the fall, and will be pursuing a degree in Economics and Finance.”

“As a student at Pinkerton Academy, he’s a member of both the National Honor Society and the National Technical Honor Society, as well as being an award-winning member of the Future Business Leaders of America and an officer of the SkillsUSA chapter. He has been very active in the Career and Technical Education programs at Pinkerton. He plans to continue working for Market Basket while attending college.

“Kasey Potvin of Goffstown, NH. is 18 years old and a graduating senior in the National Honor Society at Goffstown High School. She is the 2nd of three children to Alan Potvin and Kathy (Thomas) Potvin who are both originally from Lawrence, MA. “I couldn’t be more excited to be attending UMass at Lowell in the fall with a major in Nursing (a goal of mine since a very young age). I feel strongly that the model of how to treat people regardless of their position or status was well established by Mr. Demoulas. I am very proud to say that I’m an employee of Market Basket, store 71 in Bedford, NH. I’m looking forward to incorporating the virtues that I have learned from Mr. Demoulas’ demonstration during a crisis into my life and career.

Patrick McRobbie is a 17-year-old senior at Methuen High School. He has worked at Market Basket for over two years in store #6 in Salem, NH as an assistant front end manager.

In the fall, he is planning on attending Plymouth State University as a Psychology major. He began working at Market Basket on the weekends when he was 15 years old. At 16, he started working the closing shift and says he really began to enjoy the environment that was provided at Market Basket. “When I was promoted in May of 2015, I was very excited. I truly believe that Market Basket has a remarkable management training program.”

Platinum sponsors Kevin Leach, Joe Zingales of Team Zingales-Remax, and Mike Agricola, owner of Salvatore’s in Lawrence were also called to the stage to help with the presentation.