By PuppyGirl Kate Whitney on October 12, 2011Comments Off on Changing Your Adopted Dog’s Name

This is such a beautiful time of year here in New England. Get out with your dogs before the winter comes and the weather is too treacherous (yes, it’s coming) and you don’t want to go out. Go for a hike in the woods and get a glimpse of the beautiful changing leaves. Go for a walk along the Charles River in Boston and breathe in the sweet smells of autumn.

There are many charity walks coming up, too. Grab your pup and head out to show your support for some great causes (just be careful of the pads on their feet if they aren’t used to walking long distances on pavement).

My dad is always sending me things to read online or cutting out articles in the newspaper for me to read. Often times they are about women in business, entrepreneurs, running a successful business, etc. But the fun ones he leaves for me have to do with dogs.

Recently my dad sent me an article that was written about changing your adopted dog’s name. This topic has really intrigued me…ever since I adopted my two “babies” Dash and Honey.

Dash was dumped at the shelter when she was only four weeks old. Torn from her mother way too young, she has some anxiety issues today. But that is beside the point, and only makes me love her more. When she came up here to MA through the rescue I volunteer for, she came up with lots of paperwork (transport certificate, vetting info, etc.). On the intake papers from the shelter down in Virginia (where she is from) her name was Cheyenne. She probably came in with no name and the shelter gave her that name. 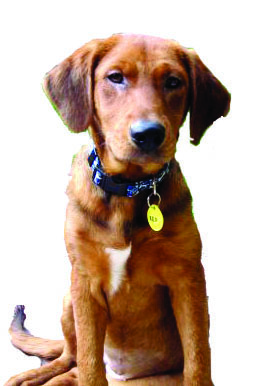 When she came up here to MA, she was re-named Dash. I have no idea why. Probably because she was a bit skittish (even at 3 months old, poor baby), and would dart/dash around nervously (today, we even call her “baby dash” because she is frightened easily). She was my 3rd foster dog. As a few days passed by and we waited for applications to come in for her, something clicked for me. I knew this dog was not going to leave my home; she was going to be adopted by me. You know the old saying when it comes to love, “you just know”…..well I “just knew” with Dash. She was such a sweetheart and something about her just called out to my heart. Ok, so why am I telling you this story about Dash?

Moral of this story #1 is that I kept her name and didn’t change it. She was responding to the name very well and I didn’t feel the need to change it and mess her up. So Dash it was and Dash it will be forever! I’ve come to be okay with the name, although many people say “oh like Dash, the store owned by the Kardashians?” And NO, it’s NOT like that! I’ve had Dash for about 4 years now (she turned 4 in August, wow how time flies), which is way before the Kardashians!

My other baby is Honey (HoneyBunny). She is from the same shelter in VA that Dash came from, but they are about 3 months apart in age and in intake date at the shelter. She didn’t come to MA as Honey, she came as Betty. “Betty” came to me as my 6th foster dog. She was the sweetest little thing I had ever held. When I looked into her beautiful honey colored eyes, I swear I saw a human.

There was just something about her…and just like that, I knew. This dog was going to be my 2nd dog. Dash was getting a sister. (Side note: one might think that I’m what we in rescue call a “failed foster parent” but technically I’m not because even though I adopted two of my fosters, I still foster! And have fostered over 30 dogs. I just wanted to point that out).

Ok back to Betty/Honey. So it had only been a few days that Betty had been in my care when I adopted her, so I didn’t mind changing her name. I would have kept the name Betty, but one day something happened. I was at the counter making a sandwich, and Betty came over to my side. I looked down at her and said “what honey?” – As in “what sweetie,” the way a parent or adult often talks to a child. I know growing up my parents called me “honey” all the time. And just like that, a light went off. Her beautiful fur was the color of honey and she was the sweetest baby. So I decided to call her Honey. And boy was it the best suited name for her. She is SUCH a HoneyBunny!

Ok, so now that I’ve told you my personal experiences with name changing, here is a little info for those of you who still have questions. Many times people want to change their dog’s name because they simply just don’t like the name they were given. This is fine in most cases. I’m speaking to those of you who have adopted/rescued (THANK YOU) your dog. Many times at the shelter, dogs are given names solely as a means of identification. Instead of using numbers, names feel a little more personal.

My rescue will pull dogs that have only been a number their whole life…but when they come to us, they are given a name a second chance. To see the sweet face of puppy #1619 scheduled for euthanasia the day after tomorrow, be pulled from death row, transported up here to MA, given the name Bailey, and adopted into a warm loving home with treats and a comfy bed…there’s nothing quite like it. But that’s why those of us in rescue do it. Ok, getting off topic. Sorry. 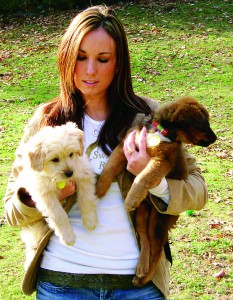 Many times it’s a good idea to change a dog’s name. If bad or negative connections are made between that dog and its name, that’s a perfectly acceptable reason to change it. Many dogs have been picked up as strays on the side of the road or in a field and were given a name at the shelter. Most likely the dog hasn’t had the assigned name for very long, and it would be fine to change it. If the dog has had a rough beginning and needs a “fresh” start, changing the name is acceptable. And definitely change the name if you notice that the dog quivers or shows fear when you call him by his original name.

I would say NOT to change the name if the dog had been in a loving home for many years and was recently dumped at the shelter for one of the many excuses we always hear (it got too big, we had a baby, we had to move, I’m allergic, I don’t have time – ugh, please… we could write a book). In this case, the dog has had a good life and has positive associations with its name. Changing the name could lead to confusion and transgression in its new home. In this case, I would say to keep the name it has.

I feel that for the most part, changing the name can lead to a fresh start for both you and your new best friend. If you do decide to change it, go slow and make sure to give lots of praise and reward. Whenever you say the new name and your dog looks at you, give her a treat and a big “GOOD GIRL, YES!” and lots of hugs. Speak softly and lovingly, don’t rush them. You can also link the old and new name together, saying both names, and then finally just saying the new name. Remember, be patient. You want this experience to be a positive one…after all, isn’t that why you are giving him a new name?

For those of you who haven’t felt the amazing feeling of giving a homeless dog a place to call home, I urge you to try it. But remember that adopting is a big commitment and a dog is a living, breathing creature that needs lots of care. If you and your entire family are not ready for this responsibility, please do not adopt.

Adopt a Dog, Kate Whitney, One tail at a time dog rescue, PuppyGirl