By Tom Duggan on March 31, 2013Comments Off on D’Agostino Asks Methuen Councilors to Evaluate Candidates for Solicitor Using Criteria They Set 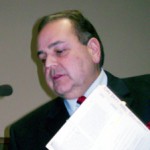 As one of two final applicants for the city solicitor’s position in Methuen, Richard D’Agostino has written a letter to the Methuen City Council asking them to put aside the smear campaign against him and evaluate both candidates on their record and references.

D’Agostino calls on councilors to complete the process based on the criteria that they themselves established.

Several months ago, I responded to an advertisement seeking to fill the position of Methuen City Solicitor.

Accordingly, I submitted a cover letter and resume that was given an initial evaluation by the Council’s Selection Committee. I was subsequently notified, via email, to appear for an interview.

My response to the advertisement (along with eleven others) was submitted in good faith, with the expectation of a fair and unbiased evaluation.

I am honored to have been chosen as one of four finalists that was asked to present myself for further professional assessment, pursuant to the criteria established by the Selection Committee. Consequently, I submitted a consent form for a C.O.R.I. background check, six letters of reference and appeared for an additional, detailed interview by the entire Methuen City Council in a publicly televised forum.

Unfortunately, somewhere along the way, the criteria for selection has evolved into a focus upon negative input and innuendo, rather than the positive, factual information that was requested and provided. Thus far, the evaluation process has been guided by a vitriolic whisper campaign, political skulduggery and biased appraisal, offered both publicly and privately in a sole effort to destroy the candidates’ opportunity for an impartial evaluation and selection. Such conduct has been grossly unfair to me and Mr. William Faraci, the other finalist for Methuen’s City Solicitor.

It is well to note, however, that the specious attacks that may have impaired your objectivity, coupled with the subsequent harm to the candidates is not irreparable. You are only required to take the affirmative step of evaluating Mr. Faraci and me in an objective, unbiased manner, void of any influence from the jaundiced portrait that has been craftily sketched by deceitful artists.

Instead of relying upon letters of derogation, inflammatory media reports, false whisper campaigns and fear of political reprisals, I ask that you base your decision upon the criteria that you, as elected representatives of the City of Methuen established at the outset of the solicitor search.

I, as well as Mr. Faraci must have met that criteria in order to still be in consideration in this process. Evaluation of the positive criteria in an unbiased manner is all that one should expect.

Humbly, I state, that I have submitted an accomplished resume, provided a thorough, open, honest and responsive rendering to the scrutiny of the interview process, and submitted letters of reference from some of the most esteemed members of our community, in an effort to secure your confidence and consideration for appointment as Methuen’s City Solicitor.

Please review the reference letters, and evaluate the words of those who took the time to subject their own reputations to scrutiny, in order to advise you of my fitness and qualification for this very important position.

I respectfully request that you move forward to a vote of conclusion on Monday, April 1, 2013, as you have planned.

I thank you for your attention and careful consideration.

RELATED STORIES
Lantigua Weighs in on D’Agostino in Methuen, Tries to Sink His Chances for Solicitor Job