Dead to Me ~ TV TALK with BILL CUSHING

By ValleyPatriot on June 29, 2019Comments Off on Dead to Me ~ TV TALK with BILL CUSHING 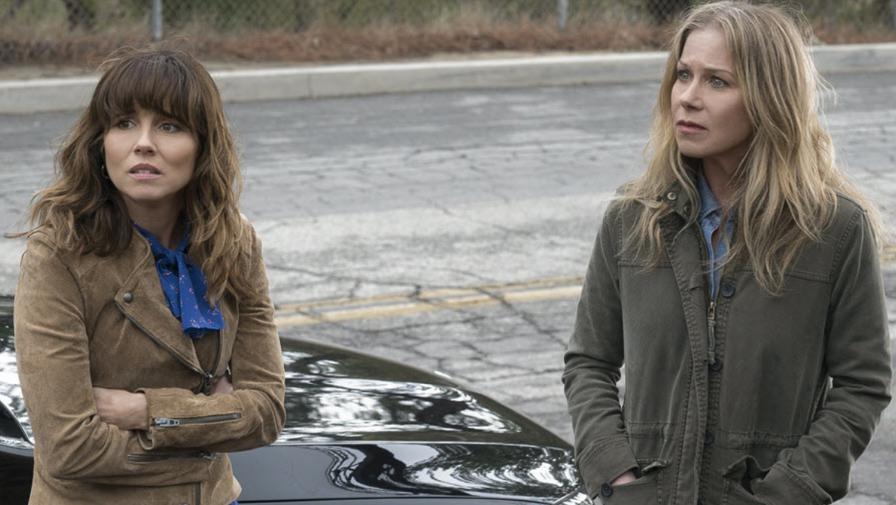 ‘Dead To Me’ is one of Netflix newest binge worthy series. Created by comedian Liz Feldman and produced by Will Ferrell and Adam McKay, the dramedy follows two women, Jen played by Christina Applegate and Linda Cardellini.

Applegate plays Jen, a high-end real-estate broker whose husband has been killed in an unsolved hit-and-run some three months prior. While at a grief support group, Jen meets Judy (Cardellini) who is also there dealing with the grief of losing her fiancé to a heart attack. Judy is dealing with her grief, while Jen is more focused on getting revenge on the person who ran down her husband. Jen is defensive and doesn’t know how to let other people help her. While Judy is much more optimistic, always looking for the bright side. The two balance each other out. The slow building friendship and bond shared between the two women is believable and strong. Both of them support one another and let the other express themselves without judgment.

Through a series of brief flashbacks over the course of the show, we see the losses that each of them had to endure, and get more light shed onto the mysterious backgrounds involving both of these characters and the events surrounding their grief.

The less you know about ‘Dead to Me’ the more effective the many twists and turns will be when you watch, so I won’t give too many more details about the storyline. Let’s just say that there is more than meets the eye to each of their stories, and the first episode ends on a shocker that sets up the rest of the season. In fact, each 30-minute episode ends on a cliffhanger, making it an easy series to binge-watch in a weekend.

The highlight of the series are the great performances by Cardellini, and especially Applegate who turns in some of the best work of her career. They are perfectly cast and work so well together showing such great chemistry. The realism and layers of the characters combined with the strength and talent of the actresses is a treat to watch.

Ed Asner and James Marsden are also both excellent in supporting performances.

The show can be very dark at times, but at other times it is also very witty and extremely funny.

Much like another Netflix series, ‘After Life,’ which I reviewed a couple of months ago, ‘Dead To Me’ uses humor as a tool to deal with real issues such as grief, trauma, betrayal, resentment, loss, and rage. To the shows credit, they don’t shy away from these subjects either, they embrace them.
‘Dead to Me’ is an extremely enjoyable watch.

A second season of the show has not yet been announced but it’s virtually a sure thing.

All 10 episodes of season one of ‘Dead to Me’ are available to stream on Netflix.

If you have any questions about TV you can email me at BillsTVTalk@gmail.com. I will answer all of your questions and will feature some of the questions I receive in a future Mailbag column. Follow me on Twitter @BillsTVTalk and on Facebook at BillsTVTalk for daily up-to-the-minute TV news and discussion. See you next month! ◊