By Tom Duggan on July 15, 2019Comments Off on Defending America’s Right of Free Speech Over Sharia Law is No Longer Allowed on Facebook 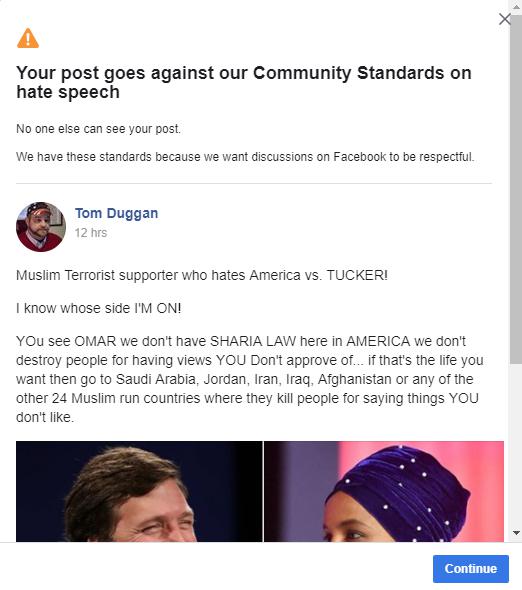 As a free speech advocate and a newspaper publisher of more than 15 years I was horrified to learn that Facebook now sides with Sharia Law over the free speech values of the United States. After all, it was those very free speech rights that made Facebook what it is today, a multi-Billion dollar corporation.

Last night, I posted a story about how a Sharia Law – loving congressman Illan Omar was trying to silence Tucker Carlson for daring to criticize her.

I wasn’t attacking her “religion” I was attacking the extreme views within her religion to punish those who disagree with her.

No matter, the posting below got me another 30 day suspension from Facebook, as defending free speech against Sharia Law is no longer allowed in the People’s Republic of Facebook.

Take a look at the images in the link below to see the other things Facebook will no longer allow you to post, everything from images of a church, to an NBC story on a Climate Change Scientist who was convicted of fraud

SEE PREVIOUS STORY ON THIS ISSUE 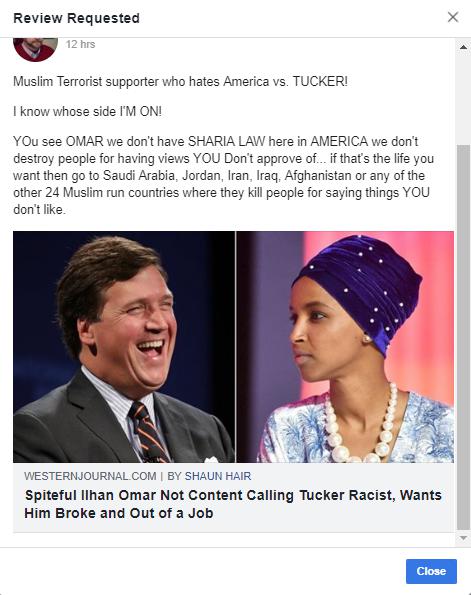 Defending America’s Right of Free Speech Over Sharia Law is No Longer Allowed on Facebook added by Tom Duggan on July 15, 2019
View all posts by Tom Duggan →