By Tom Duggan on June 30, 2019Comments Off on Social Media Censorship Takes an Ugly Turn ~ PAYING ATTENTION with TOM DUGGAN

Last month, I posted a story about four children who died in U.S. custody at the border since December.

Given all the misinformation and lack of logical thought on the subject, I injected my own opinion that having only four children die on the border in six months, was an amazingly low number given that thousands of illegal aliens are streaming across the border every single day.

One would think that with so many people coming here that the number of children dying would be a lot higher: just by virtue of the fact that so many people come here for better health care, and some are already sick, or have medical issues before they leave their home country.

It’s not exactly a controversial position to hold. In fact, it’s purely a matter of numbers. More children died in public schools last year than died in U.S. custody at the border.

A funny thing happened, however, within minutes of my seemingly innocuous post. 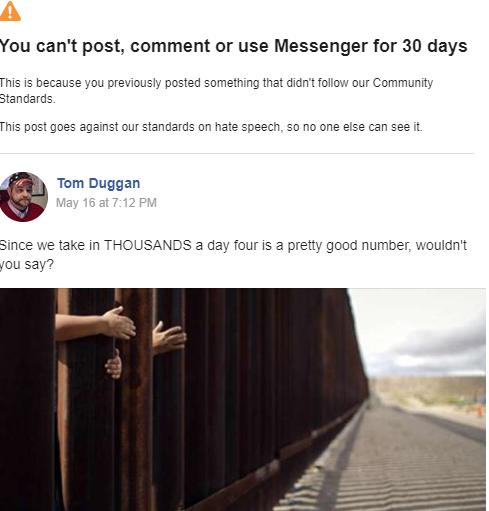 Obviously, someone read my post and somehow interpreted it as “anti-immigrant” and reported me to Facebook. Perhaps I should have said it was a pretty “low” number considering… instead of a “good number” so that the weak minded and the morality police would more clearly understand what I was saying.

But, in a free country should we really have to worry about morality police punishing you for holding a view they do not approve of?

What’s worse, when I appealed to Facebook for a review of the ban, someone at Facebook manually looked at the post and determined that, YES … it was indeed hate speech, and then informed me that the ban would remain in effect until June 18th.

I was stunned. I certainly was not celebrating the death of children. I was not saying it’s GOOD that children are dead. I was simply saying the NUMBER is a very low number considering statistically how many people come here every day. No matter, the Fourth Reich in Silicon Valley didn’t like it and my access to Facebook was restricted for 30 days.

Facebook also took down several posts because officials at Facebook didn’t like the message being put forth by news outlets I was sharing. Take a look below and tell me this censorship is about “safety” or “hate speech”.

It’s one thing to censor online content which is racist or “threatening”.  It’s quite another to ban someone for simply questioning whether or not four children dying is a high or low number given the circumstances …. or because they disagree with someone’s political views.

I was further stunned when I posted the screen capture above to Instagram complaining about the ban, only to have brainwashed liberals read into the post and interpreted it as my “celebrating the deaths of children”. One such brainwashed snowflake was a Lawrence activist, Tennis Lilly, who stated that he disagreed with my post and that NO child should be dead. Somehow his brainwashed world view lead him to believe I disagreed with that.

So, now the standard for having a social media account is that you must not post anything that left-wing authoritarians disagree with, no matter what the subject, even if it’s a statistical analysis.

If you do, you’ll be silenced for daring to provoke free thought and discussion on-line.

Who knew that the real enemies of freedom would come in the form of multinational tech. companies bent on destroying everything this country was founded on?

For more than 200 years we feared that government censorship would mean the end of free speech and free thought. We put safeguards in our constitution to restrict the government from chilling speech that is unpopular or threatening to their power. Now it’s time we have similar protections from multinational corporations that do not have our best interest at heart, all the while yielding far more power and amassing far more money than any government on the planet

If free speech is to survive the next generation we need our representatives in government to pass an internet user’s Bill of Rights now. We need our government to treat social media companies as publishers and take away their monopoly (utility) status that allows them to make billions of dollars while censoring views based on content.

But, since Facebook has paid them all off, don’t hold your breath. ◊