By Tom Duggan on August 7, 2012Comments Off on Freedom of Information: Enforce the Law 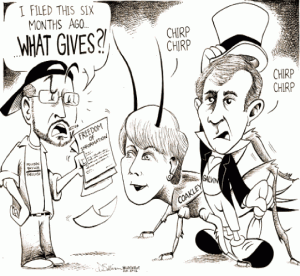 The Valley Patriot submitted document requests to the City of Lawrence under the Massachusetts Public Records Law on February 22, 2012. The documents we requested are public documents that must be turned over within ten days by law. Yet, as of the date we published this edition, (August 7, 2012) the City of Lawrence has failed to produce any documents at all.

In fact, we didn’t even receive a response to our February 22nd request until the last week of July and that correspondence was a response to our inquiry as to what was taking so long. Lawrence City Attorney Charles Boddy stated in a letter dated July 18th, that we had to pay $61.81 claiming it would take city employees a mere two hours to produce the documents upon receiving payment. In other words, Lawrence stalled for months to turn over public documents that they admit only takes two hours to produce.

This is unacceptable. It is a pattern of illegal behavior that goes back to Lantigua’s first few weeks in office when he refused to turn over expense records for the $10,000 curtains and flooring he bought for his office. That was three years ago and nothing has changed.

We believe that The Freedom of Information Act (or any law) which is not enforced isn’t a really a law at all. It is a polite suggestion. We are tired of hearing the sound of crickets from state officials close to Lantigua who do absolutely nothing about these blatant violations. We demand that Secretary of State Bill Galvin and Attorney General Martha Coakley (both of whom benefit greatly from Mayor Lantigua’s political support) start holding Lawrence Mayor Lantigua accountable for turning over public documents… ALL public documents, in accordance with the law.