By Tom Duggan on October 9, 2012Comments Off on Secretary of State Galvin Issues Order to Charlie Boddy on Public Records

Refuses to Take their Calls

In a letter dated October 3, 2012 Secretary of State Bill Galvin’s Supervisor of Records, Attorney Shawn Williams issued an administrative order against Lawrence City Attorney Charles Boddy to turn over public records requested by The Valley Patriot back in February.

The documents Boddy is refusing to turn over center around School Department Employees who are double dipping after retiring early and taking consulting positions with State Receiver Jeff Riley in the Lawrence Public Schools. Also at issue are payment records for the DiAdamo Law Office, Attorney Carmine DiAdamo, and Attorney William DiAdamo in their capacity as the city’s worker’s compensation attorney’s, as the landlords for the Lawrence School Department Administrative Offices on Essex Street, their work on the Greater Lawrence Sanitary District, The City’s workforce investment board and any other payments made to the DiAdamos.

As of today, October 9, 2012, Lawrence City Attorney Charles Boddy has yet to comply with A Freedom of Information Request for Public Documents that was initially filed in February.

The Valley Patriot filed court action last week claiming that Boddy is purposely refusing to turn over public documents that state law says must be turned over within ten days of request.

Not only is the Valley Patriot getting no response out of City Attorney Charlie Boddy on public records requests, The Secretary of State’s Office themselves say multiple attempts to reach Attorney Boddy for a conversation on the matter have failed as well.

“In a September 26, 2012 electronic mail, Mr. Duggan informed this office that the City had yet to provide records responsive to his request. In order to allow the office to clarify its position Michael Pagones, an attorney on my staff, called your office. Your office has yet to respond.”

The letter concludes that if City Attorney Charles Boddy does not comply with this third notice to comply with state law, someone else might do something about it.

“Failure to comply with this administrative order may result in Mr. Duggan filing a complaint for enforcement in the Superior Court, ” the letter concludes.

Under the Freedom of information law there is no penalty for those who refuse to comply. Attorney General Martha Coakley’s Office has constitutional authority to prosecute FOIA violators but since taking office Coakley’s Office has enforced exactly zero cases where public documents were refused to the public.

A hearing is scheduled in Lawrence Superior Court on Thursday, October 11, 2012 at 2pm.

Duggan is seeking penalties, court costs, an enforcement order from the judge on future requests and the original documents requested. 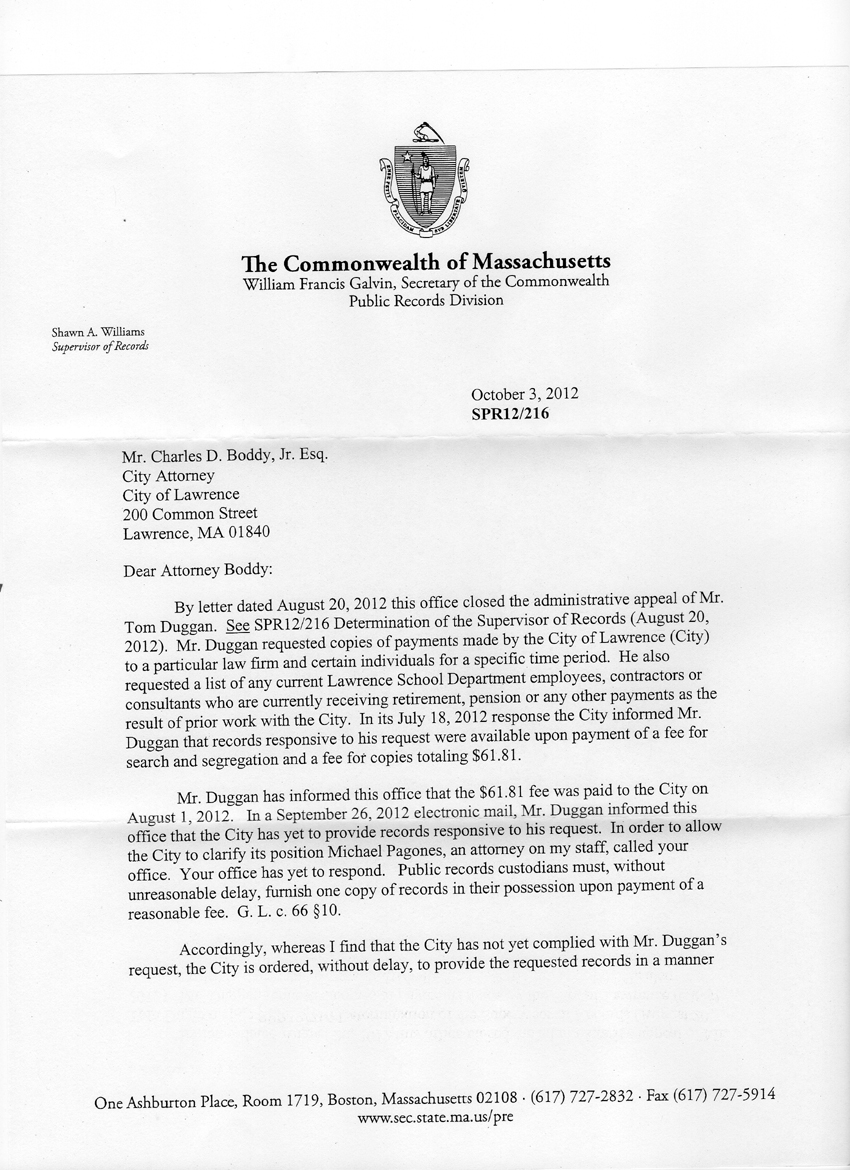 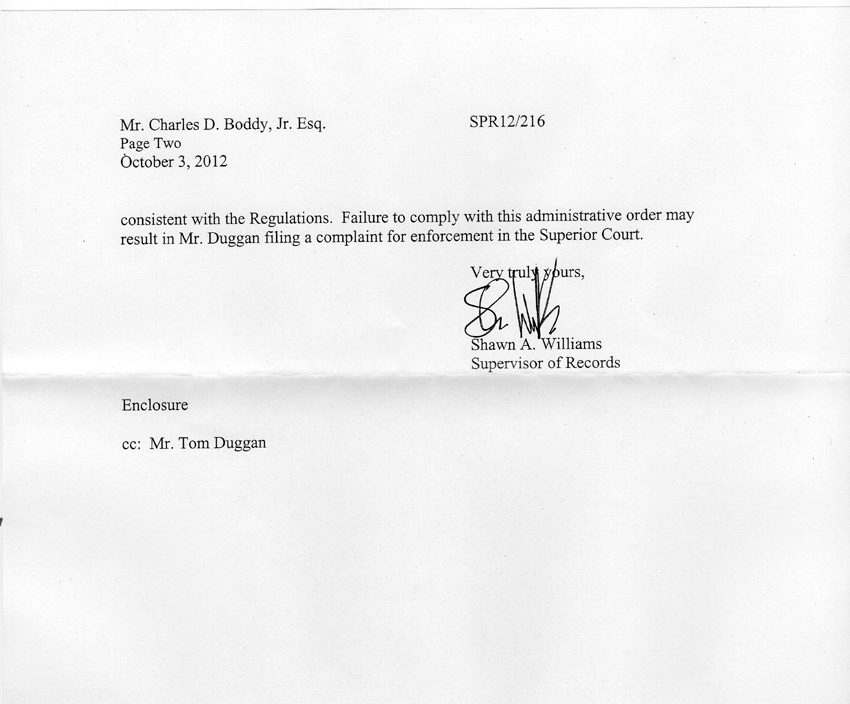