Free Dental for all LPS Students and their Families

LAWRENCE – With the Lawrence Public School under the complete control of the State Department of Education there are a lot of changes coming to the school system, and a lot more money being spent.Where we are – State Commissioner of Education Mitch Chester has appointed a “receiver,” Jeff Riley, to control every aspect of the school system. He is operating without a superintendent. He does have the power of the Superintendent and the School Committee, and thanks to state legislation has full control and authority over the entire Lawrence School System.

He is, however, not the superintendent of schools.The elected Lawrence School Committee no longer has any authority over spending, hiring, contracts, or school department policy. And while they still hold public meetings, members of the committee are locked out of day to day operations of the school district.Yet, Receiver Riley submitted his proposed budget last month on school committee stationary which said “Lawrence School Committee Budget” with the School Committee logo on it, giving many the impressions that the elected school committee had something to do with his budget.Receiver Jeff Riley is now going into his sixth month as receiver of the Lawrence Schools. He is the former Chief Innovation Officer for the Boston Public Schools.

Riley was hired by Education Commissioner Chester Mitchell with no experience in turning around a failing school system. He was given a three and a half year contract, at $198,000 per year with benefits and reimbursements to “turn around” the school district, yet there is no legal definition or policy outlining what specific goals must be met to for the schools to be considered “turned around”.Under the law, the State Education Commissioner or receiver may expand, alter or replace the curriculum of the schools.

They may increase the salary of teachers or administrators in order and can reward or give bonuses to teachers and administrators the commissioner or receiver can suspend, change or terminate any bargaining agreement and can extend the school day or the school year at will. The one thing that the legislation specifically spells out is that they shall not reduce the compensation of any teacher or administrator.

Riley didn’t waste any time bringing friends, acquaintances, and former colleagues on board to work in high paid administrative positions. He created a “cabinet” of administrative jobs, also creating their salaries, job requirements and determined the language in each of their contracts.

Even though the positions were publicly posted on the school department’s website, all of the people Riley has hired were people that he knew.

The Valley Patriot matched up the posted job descriptions of Receiver Riley’s “cabinet” and new hires, with the resumes of those he hired. The job descriptions look as though they were designed for specific people Riley was affiliated with in the past.

The Players and Their Pay

Mary Lou Bergeron, who was named acting superintendent when Wilfredo Laboy left, has now returned to her position as Assistant Superintendent of Operations and Support Services. It is unclear in Riley’s budget how much Bergeron is making, and our sources say Riley already has someone in mind to replace her.

Dale Lipkin is the new Assistant Superintendent of Curriculum and Instruction. She is making $128,900 plus benefits and expense reimbursements.

Marlise Rodriguez-Garcia was hired as Riley’s “Chief of Staff” at $115,000 per year.

Shalimar Quiles, a Lawrence High School graduate and former intern to Riley in Boston, was hired as the $65,000 per year plus benefits and expenses.

The Receiver holds public meetings for one hour on the first Tuesday of every month and calls them school committee meetings although he runs them from a chair facing the school committee and the agenda items are his own. Riley held a meeting last month to unveil his fiscal year 2013 school year spending plan, topping off at $158 million. He spent only ten minutes on a presentation to the public giving no details at all about how the money was directly being spent. School Committee members were not invited to the meeting and those who found out about it had to sit in the audience.

Riley has told members of the elected school committee that, since they do not legally exist anymore he has no obligation to give them information or notify them about “his” meetings.

Last month School Committee member Pavel Payano had words with Riley after a meeting expressing his frustration over committee members not being notified of the public budget hearing or receiving a copy of the budget. As a result of the interaction Riley never posted the May school committee meeting and members were informed a day in advance their meeting had been cancelled. Some members wanted to meet as scheduled to discuss the topics that were on the agenda, but were told the meeting had never been posted 72 hours in advance so the meeting could not legally take place.

Parents have complained to The Valley Patriot that Riley has had no meetings with parents to let them know what changes he is making or what his plans are for increasing test scores and how this will all ultimately impact their children.

The elected members of the school committee requested The Massachusetts Association of School Committees to intervene and come into the city to advocate for them having oversight on how Riley spends the taxpayer’s money and maintaining some level of local say. The takeover legislation specifically states:

“(g) The commissioner and receiver shall provide a written report to the school committee on a quarterly basis to provide specific information about the progress being made on the implementation of the district’s turnaround plan. One of the quarterly reports shall be the annual evaluation required in subsection (g).” 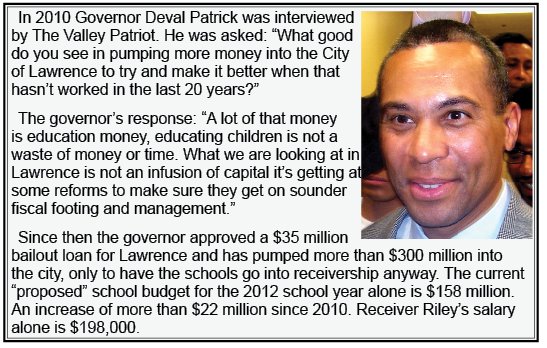 Increases in the 2013 School Budget

The 2012 school year budget was $143.9 million. More than 99% of that money was paid by state taxpayers.This year’s “proposed” 2013 school year budget is estimated by Riley to be at $158 million. But Riley himself says that those numbers are not real and will change [most likely go up] once he defines “the turn-around plan” required to be unveiled last month. No turnaround plan has been revealed as of the day we went to print.Within Riley’s budget he admits that the individual schools have yet to submit their spending plans.His budget also doesn’t include the millions in grants that normally don’t go through the school committee but are designated for specific programs.It also doesn’t include the millions in private foundation money he is planning on bringing in for programs like; free dental services for all Lawrence Public school children, and “multicultural enrichment programs.”Nobody knows if Riley can pass a budget without releasing those exact numbers to the public since this is uncharted territory.Lawrence is the first school district taken over by the state of Massachusetts under the new ‘chronically underperforming’ legislation and is being positioned as the national model for state takeovers of school systems.Just One Example of Riley’s Spending Increases – Dr. Mary Lou Bergeron’s office budget (for operating expenses) went from $78,000 in the 2012 school year to $1.2 million in the 2013 school year for an increase of $1.15 million.Salaries under the authority of the Assistant Superintendent went from $264,512 in the 2012 school year to $1.87 million. In just one assistant superintendent’s budget alone, the “proposed” spending increase under receiver Riley tops off at $2.7 million dollars.Free Dental for EveryonePrivate Foundations “Leveraged” to Increase Government SpendingMuch like the way the Lawrence Public Schools offers free meals to all students and their families, Receiver Riley plans on using money from a private foundation called Polished Teeth, LLC which touts itself as a 501C3 not for profit corporation, to start offering free dental services to all students in Lawrence and their families.Although Receiver Riley calls the free dental plan a “proposed plan,” the fact is Riley has complete authority to implement whatever programs he wants and does not “propose” the plan to anyone for approval.Emails obtained by The Valley Patriot show that Commissioner Mitch Chester and Receiver Riley, along with Chris Gabrielli, plan on increasing government spending in the Lawrence Public Schools over time, using private foundations connected to or affiliated with Chris Gabrielli. The foundations will “donate” money for programs in the schools and eventually pull back their funding; leaving the state and federal government to pick up the tab once these programs and the curriculums are entrenched in the school system.Commissioner Chester spells it out in an email to Gabrielli and Receiver Riley in an email (dated February 3, 2012) as follows:“It is important to reiterate that these private resources are meant to compliment and leverage, not supplant [replace] public funding … Bottom line, private resources spent now will leverage orders of magnitude larger public resources over time.”

The email also spells out how the receiver and private foundations can increase government spending on the Lawrence Public Schools:

“Also, it has been reported that some federal money currently available is not being used because of limited skill and capacity and as more schools in Lawrence become subject to state turnaround requirements [schools that they deem to be failing] they also become eligible for federal School Improvement Grant support…”

According to the emails, Receiver Riley has been communicating with a variety of private education foundations including the Bill Gates foundation.

NEXT MONTH: How false data and public propaganda was used to take over the Lawrence Schools for Political and financial gain.

Tom Duggan is publisher of Valley Patriot, Inc., a former Lawrence School Committeeman,former political director for Mass Citizens Alliance, a Police Survivor and hosts the Paying Attention! Radio Program from 10-noon on WCAP every Saturday. You can email him at
valleypatriot@aol.com.