Most Refuse & Stick with Monarch Project 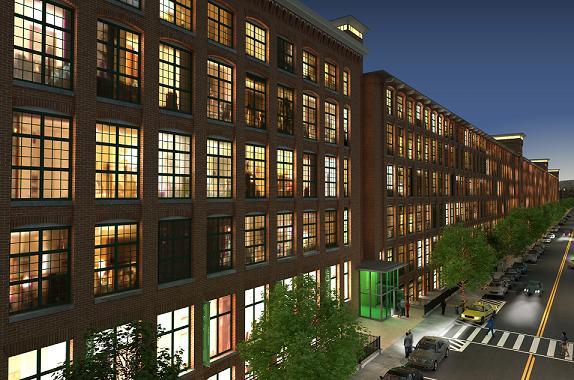 In the face of adversity, developer’s commitment to sustainable
business practices goes beyond environmental concerns

LAWRENCE, MA – The Eagle~Tribune’s bogus hit piece (story here) on sustainable developer Bob Ansin’s $200 million “Monarch on the Merrimack” project (Valley Patriot story here) has not only cost Ansin $40 million in financing and stalled the project “for months” (See Part I) but the malicious Tribune story has also affected those who have purchased condominiums at the old Wood Mill Building.

Construction on the first phase of the Monarch Lofts, a high-profile eco-friendly project was approaching 50% completion after Ansin dropped $25 million of his own money into the project. But because of the bogus Eagle-Tribune story claiming Ansin was running out of funds and that asbestos was found in the building, a San Francisco-based bank backed out on the commitment of a $40 million loan slated to be handed over to Ansin the day the Tribune story came out.

Ansin revealed in an exclusive interview yesterday with the Valley Patriot that he offered each of the 53 people who put down payments on Monarch Lofts an opportunity to get their money back “no questions asked”.

“I was troubled that our buyers’ lives would be on hold because of our problems with financing,” Ansin said. “We offered every buyer the chance to rescind their purchase. Almost every single one of them said they believe in the project and are willing to wait, despite the Tribune attack and the uncertainty of when construction will resume.” 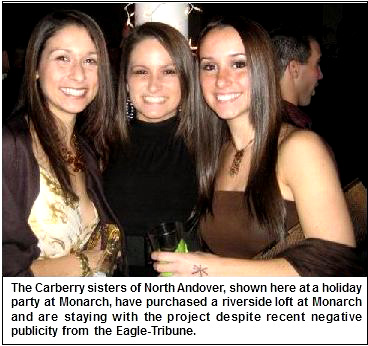 Several buyers told the Valley Patriot that they were not bothered by the bad press. ‘Of course we will wait,” said Ed and Joannie Warnshuis of Tewksbury, who were the first buyers at Monarch in April 2006. “We looked everywhere and there is no place else we would rather live.”

John Grange, a retired wine broker said he was not discouraged. “I’m sticking with this for three reasons: for the quality, for the vision, and for the integrity of the team,” said.

One woman said, “We know how the Tribune operates. We know how they lie and destroy people’s lives in this community. I think at this point everyone knows what they are up to. When we saw the story, it made us wish we could afford to buy two penthouse suites.”

Monarch’s sustainable approach quickly transformed the mill conversion from a local project to a national story. But Ansin’s award-winning vision of sustainable development went beyond ecoluxury, renewable materials and resource efficiency: “We try to run every aspect of our business sustainability  When the project started, we bought and hired locally because it was the right thing to do. Right now, returning deposits was also the right thing to do,” said Ansin. “We’re touched that so many people are standing by Monarch.”

Ansin’s vision came with a risk. Many developers would have used conventional tax credit financing to convert the mill into affordable rentals. But that wouldn’t have been consistent with MassInnovation’s mission.

“If Monarch was going to play a role in helping revive Lawrence, we knew that it wouldn’t be enough to just convert an old mill into housing,” said Ansin. “We needed to provide residents with a lifestyle that they couldn’t get elsewhere.” Not only did Ansin put $25 million of his own money into the Monarch project but he even moved MassInnovation’s offices from Fitchburg to Lawrence – a vote of confidence in the community, and a significant contrast to the Eagle-Tribune, which moved its offices from Lawrence to North Andover.

The search for the balance of the construction financing has not been easy. One bank committed to the Monarch deal then backed out as the capital markets contracted.

The real estate market has changed dramatically since Ansin acquired the mill in 2003. “Part of the reason for the credit crunch and the turbulence in the housing market is that the lenders weren’t behaving in a sustainable way,” said Ansin. “But if it weren’t for the reckless reporting at the Eagle~Tribune, these buyers would be getting to move in to their lofts much sooner. Now they will have to wait until we secure funding. That’s not really fair to them. I am very relieved, however, that the community is rallying around us and people are reaching out to help in any way they can.”

“This project is going to happen,” Ansin concluded. “We’re committed to seeing our vision for Monarch through, even if it takes a bit longer.”