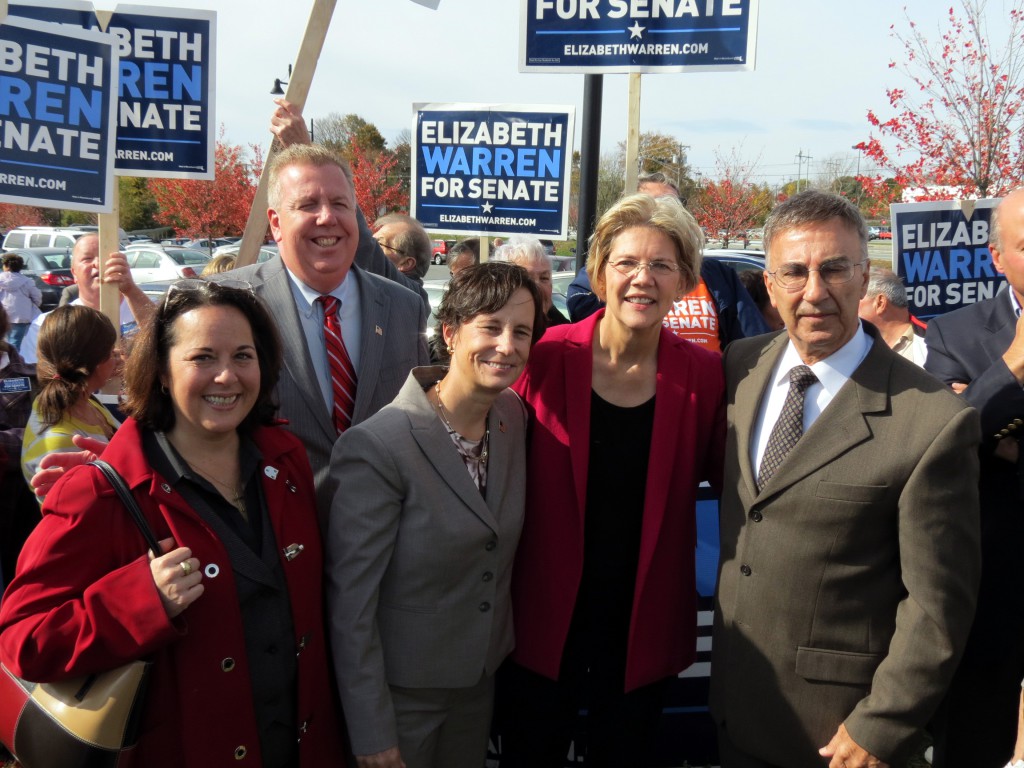 Warren’s has consistently attacked Senator Brown for not using abortion as a litmus test for his vote on Supreme Court Nominees. The Valley Patriot asked her about that after the event.

“The record speaks for itself,” Professor Warren told the Valley Patriot in an exclusive interview.

We asked Warren about her litmus test. “Should abortion be the only litmus test for the Supreme Court? If a right-wing republican was nominated to the court and was pro-choice would you vote for him?”

“They key is that Senator Brown has taken some good votes, I have no doubt about that. He’s a good husband and a good father. But he has taken some votes that are not good for women,” she said not answering the question.

“OK, but could you answer my question?” The Valley Patriot asked. “If there was a right wing republican who was pro-choice….

(for the record she never answered the question)

Do you think he voted against her because she was pro-choice?

“I don’t know why. But what I do know is, he had one chance to vote for a pro-choice women from Massachusetts, who is imminently qualified to go to the United States Supreme Court. And there’s nothing confusing about his voting record. He just doesn’t want to talk about it.”

State Representative Linda Dean Campbell emceed the event. Standing on a stool she shouted out to the crowd.

“Those of you who know me well know that I am a very conservative Democrat that reaches across the aisle and votes with the Republicans often and I will not, under any circumstances, vote for a republican for Senator, under ANY Circumstances!” Campbell said to a cheering Warren crowd.

You also know I share a military background with Scott Brown, he’s a good man and I thank him for what he’s done for our troops but listen to me. We have gotten ourselves in a mess because of a republican president who fought a war and didn’t pay for it, not to mention what he did to our services members who fought that war.”

“We have had a congress who has had years to resolve our debt. And I am campaigning just like a next senator here and she is right. Working class families and middle class families are getting clobbered. And they are getting clobbered because; the republican party has deregulated the banking industry and wall street. That’s why we are in this mess. They have had several years in congress to address the debt. IN the army we used to say: you lead, you follow or you get the heck out of the way and that’s what we are going to do this fall because we are going to elect Elizabeth Warren our next senator. Scott Brown is getting negative and we are going to win this election with your help.”

Methuen Mayor Steve Zanni said he was not endorsing Warren because of party.

“When I ran for mayor of Methuen it wasn’t about democrats of republicans. Instead it was a debate of differning ideas and visions for the future of our city. When we think about the race for U.S. Senate A lot of people certainly have a knee jerk reaction to support the person who is a member of their party. However, as Mayor of the City of Methuen I am not standing here today telling people to vote for this party or that party.”

“No, I am here today to voice my strong support for a candidate who has taken the time to diligently earn about our city’s concerns obstacles and hope for our future. I am here to support a candidate who has made every effort to connect with our community so that when she is elected to the U.S. Senate she will be a strong voice for Methuen, the Merrimack Valley and of course all of Massachusetts. I am here standing beside a woman who has fought her entire life middle class, the very people who call our city home. I am here with a woman who has a history of defending women’s rights, fighting for jobs and demanding equality for all. I could not be more excited to go into the ballot booth on November 6th, and cast my ballot for Elizabeth Warren as our next U.S. Senator.”

Addressing the crowd Warren said Brown is a Liar.

“Scott Brown has decided his best shot at keeping his senate seat is to launch personal attacks on me. They have been fact checked they’re not true but it doesn’t stop him he just spends more money launching more attacks. All I Can tell you is we will be judged by the kinds of campaigns we run.” 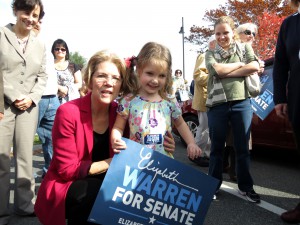 Interviewed after the event Mayor Zanni said he is not worried about his partisan endorsement hurting him in next years race for reelection and said that Scott Brown snubbed him the last time he was in Methuen.

The Valley Patriot asked Mayor Zanni if endorsing an ultra-liberal Democrat candidate might hurt his reelection chances next year given how conservative Methuen is.

“No. I don’t see it that way at all. I see it basically on what the individuals stand for. First and foremost, months ago she [Warren] came to visit me and spoke with me for over a half hour about what the concerns were for Methuen, what we were looking to do, and also the Merrimack Valley. Then she came in two or three other times and I took her to a couple of businesses,” Zanni said.

“Scott Brown came into Methuen two or three times for photo-ops. He never stopped, never called, never reached out, never said a word, and then he left the community. So, that told me a lot. If you are running for a position it would have been impotent for him to come in and ask what our concerns are, not just to come for three photo ops.”