Brown took to the microphone and challenged his opponent, Professor Elizabeth Warren who is an extreme liberal running as a Democrat for the senate seat. Brown mocked Warren for her “war on women” campaign tactic and said that Warren’s “extreme views” on taxes will “Crush women, especially women in business”.

“I am happy to be here to accept Laurie’s Endorsement today, it means a lot.  We fought a lot back in the State House to work on a lot of advocacy issues with women and children and something I have obviously had personal experience with, that’s how we got close. As a survivor, someone who has been involved in domestic violence obviously fighting for my mom and sister since I was six years old. That’s why I fought so hard to authorize the Violence against women act.

Brown said that his position on women’s issues hasn’t changed but that Warren was distorting his record and “scaring women” to “score political points.”

“As you know I also crossed party lines with Senator Shaheen from New Hampshire, dealing with an issue that’s very personal to many women in the military in particular. There is a problem with women getting abused and being raped in the military. So, I co-sponsored an amendment to provide the ability for women in the military to get the health and care and coverages that they need and that is something I am very proud of.”

“My Opponent would like you to think I don’t like women, that there’s a war on women apparently,” Brown said to the cackles and laughter of the mostly female crowd. 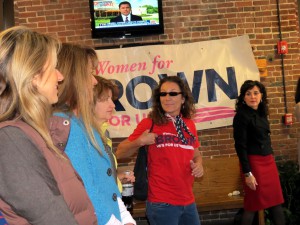 “This election is about issues, it’s about jobs and the economy and getting people back to work.”

“You know, women own businesses as well. The 3.4 trillion in taxes is going to crush women and men who own businesses and the families they are trying to protect. Her approach to ¾ of a trillion in Medicare cuts is going to crush our elder women who are fighting to make sure they get the care and coverages that they deserve, and the ability to practice their own faith. We have done it in our own health care folks, we provide that conscious exemption to make sure.” 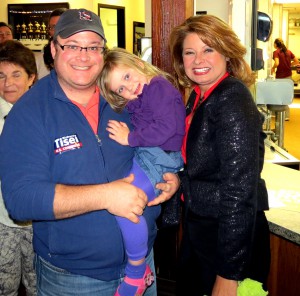 Brown was asked by the Valley Patriot what the difference are between he and Warren on Israel and Iran.

“There’s no such thing. We need to make sure we draw a line in the sand and let them know crystally clear on where we stand.”

“In dealing with Israel, It’s an amazingly small country under constant threat and they are our greatest ally in the region and one of our strongest allies in the world. I have spoken with many Jewish Americans and Jewish leaders indicating that they are scared. They are nervous and they just want to make sure we are there for them and I think my experience being on the Armed Services Committee and with my military service I understand that situation.

Professor Warren says that Israel needs to stop settlements in the West Bank. The Valley Patriot asked Brown if he agrees with that.

“That needs to be up to the people who live there. That needs to be a solution that they need to work on together. For us to dictate from the United States what another country should do, with all due respect, I don’t think that’s productive.”

Asked to respond to Warren’s assertion that he doesn’t support equal pay for women, Brown said  it’s not about supporting a bill that says it protects women but reading the bill to make sure a cleverly titled bill actually does what it says.

“You know, she needs to stop scaring women. When the Boston Globe, The Boston herald, the Worcester T&G, the US Chamber of Commerce and the NFIB all say that that proposal was the right idea, but the wrong bill. I agree with them. The bottom line is we already have laws in effect right now to protect equal pay for women. We also have Lilly Ledbetter, as the president referenced the other night. It provides a cause of action, and with all due respect, her tax policies are going to crush women in business. Her desire to hurt our seniors by cutting 3.4 of a trillion dollars in Medicare is going to hurt our female seniors. With all due respect, she needs to stop scaring women and I suggest she reads the bill. She needs to make sure she understands what they say.” 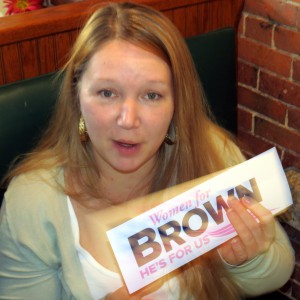 So, you think you have a jobs bill, you think ‘oh my gosh that’s going to create jobs’.

But it doesn’t tell you it’s really a tax bill and it’s going to tax 450 billion dollars out of the private sector in businesses like this one, to give to the federal government in an effort to increase  government spending. It makes no sense. So, I am going to continue to read the bills and see how it’s going to affect each and every one of you.”

I find it very disturbing that right now we have 23 million people unemployed or underemployed, we have college graduates, 50% of them can’t find jobs. So what are we going to do? Demonize our job creators? That’s really going to help,” he said mockingly.

“I mean come on we need to find a balance, we we need to find a way to work together. And that’s what I’ve been doing folks. I’ve been down there as an independent voter and thinker, doing exactly what you wanted me to do to try to bring people together, and Bridge that extremism on both sides.”

“So, why would you send someone down there who’s going to be part of that extreme agenda who’s going to vote 100% of the time with her party and her own agenda? [She’s] the person who provided the intellectual agenda for the radical Occupy Movement, imagine having 100 of them down there? I mean, come on, you all deserve better.