By Tom Duggan on October 5, 2011Comments Off on Firefighters Oppose DiNuccio Over Stand on Ambulance Privatization 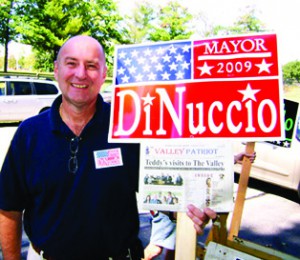 Methuen Firefighters Union President Tim Sheehy publicly called for all firefighters who live in the City of Methuen to oppose the candidacy of mayoral candidate Al DiNuccio during a meeting of the Professional Firefighters of Massachusetts. The meeting was held at the Lawrence Firefighter’s Relief Inn in Lawrence Friday afternoon.

Sheehy spoke before the more than 400 union firefighters from across the state telling them that DiNuccio was “100% against the firefighters” and urged those who lived in Methuen but work in neighboring communities not to display lawn signs or support DiNuccio’s candidacy for mayor.

The Methuen elections for mayor will be held Tuesday, November 6.

“We normally have 96 guys (on the Department), we’re down to 86 guys and this guy wants to cut us further,” Sheehy said into the microphone. “They had a debate last night and all he talked about was the fire department, and cutting us, privatizing our ambulance, which (means) we would probably lose another 20-30 people,” he concluded.

“For all locals, we have guys (who work in) Lowell, Dracut, Andover, North Andover, even as far as Boston (who live in Methuen). To all union firefighters there are some firefighters living in Methuen who are union firefighters who actually have this guy’s sign in their front yard. I need to speak to them. You need to speak to them. We are all in this together, this isn’t a situation like, this guys just not our candidate, this guy is 100% against the fire department. His name is Al DiNuccio, please any fire departments here who have firefighters living in Methuen, do not vote for this guy.”

Contacted at his campaign headquarters after the event, Al DiNuccio said “it’s really sad that they aren’t listening, adding that Sheehy was doing a disservice to the members of the firefighters union “because he didn’t give them accurate information.”

“Al DiNuccio is looking to cut the fire department budget plain and simple,” Union President Sheehy told the Valley Patriot. However it comes out we will be out men or overtime, I don’t see how that helps.”

Mayoral candidate Al DiNuccio said if people look at the numbers “It’s a no brainer.”

“There are sixteen firefighters working the ambulance service with over a $1M in the overtime budget,” DiNuccio said in an exclusive interview with the Valley Patriot.

“By privatizing the ambulance service we would eliminate none of those firefighters. The firefighters who are working the ambulances right now will become floaters or work swing shifts. These guys would come in to cover for firefighters who are on vacation, out sick, etc. So the only thing I can see as their objection is that yes, they are going to lose overtime. But, if someone is on vacation or out sick, why should the city have to pay overtime to fill that shift?”

“My plan keeps all sixteen firefighters full time, getting full time pay, and puts $1M into the pockets of the taxpayers on day one. But if you listen to them, I’m the guy who is going to close fire stations, houses are going to burn to ground and babies are going to die. This is what they are telling people and it’s funny. I think as a community we should be allowed to look at this, but they don’t even want to explore the idea because they don’t want to lose their overtime. Well, overtime is not a right, it’s not a benefit. It’s something the city should only be paying if we absolutely have to. I don’t think we absolutely have to. It would be foolish not to at least look at it,” DiNuccio said.

Union President Sheehy spoke to the Valley Patriot about Al DiNuccio during Friday’s event, saying, “I’m disappointed that I had to do this. But he (DiNuccio) didn’t say he wanted to study it, or look into it, he said he wanted to do it. He said he wants to privatize the ambulance service in Methuen. Al DiNuccio’s plan would hurt our members but more importantly it would hurt public safety in Methuen. I don’t think anyone really wants that.”

“He’s absolutely doing a disservice to public safety in Methuen by not telling the truth,” DiNuccio charged back.

“He (Methuen Firefighters Union President Tim Sheehy) came to me and we talked about this and I told him all this. Overtime is big waste of money. Outsourcing is something we have to take a serious look at.”

“We are currently losing money. Here’s the funny part: we only have a 71% collection rate on ambulance services. Now, there’s a bill in the State house that is going to pass, that says we as a city, will no longer collect ambulance money from the insurance companies anymore. We are going to have to collect directly from the people who get services. The projection on that is, we will go down to a 34% collection rate.”

“Now the problem I have is, 34% of what? We don’t know. They won’t tell us. Is that 34% of the gross? Is it net? Nobody will answer it. It’s pretty sad it almost looks like the budgeting on this is designed to hide the numbers.”

Now, think about what just happened at the debate last night,” he said.

“I can’t get the actual figures, but last night you heard one candidate say we make $400,000 on ambulance services, one said $1.4 million and one candidate said it was $1.2 million. Nobody knows!”

“I will tell you one thing when I am mayor the numbers will be available and the public will be able to find out what those numbers are.”

Then when you take into account that 81% of all the injuries in the Fire Department occur in the ambulance service, and you add to that a current 71% collection rate, privatization starts to look like a real bargain for Methuen. They (firefighters) don’t want you to hear that, they want to tell people Al DiNuccio is a bad guy.”

The union president of the Professional Firefighters of Massachusetts called for an official vote opposing the mayoral candidacy of Al DiNuccio after Sheehy spoke Friday afternoon. The motion to oppose DiNuccio’s campaign was unanimously accepted.

*Also during the meeting of Professional Firefighters of Massachusetts, members voted unanimously to endorse the candidacy of former school committeeman and retired firefighter, Dick Sullivan who is running for City Council in Newburyport. The union also unanimously voted to make a $500 donation to his campaign.

Firefighters Oppose DiNuccio Over Stand on Ambulance Privatization added by Tom Duggan on October 5, 2011
View all posts by Tom Duggan →