By jniewicki on October 6, 2004Comments Off on GLTS Dedicates Science & Technology Center 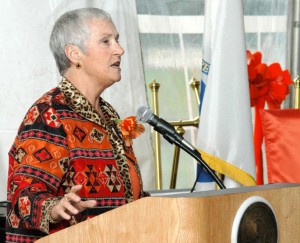 ANDOVER- The Greater Lawrence Technical School unveiled the new Science and Technology wing last month and dedicated it to a lifelong advocate of the vocational school, Evelyn Burke. Mrs. Burke has been a member of the Technical School Committee for eighteen years, was treasurer of the board for twelve years and was a nursing instructor from Northern Essex when she started at the School.

Along with the unveiling of the Evy Burke Science and Technology Center, Superintendent-Director Frank Vacirca also held an official Open House for the rededication of the Technical School at an invitation-only event last month. Alumni, retirees, public officials and families of building committee members crowded a makeshift tent, with standing room only, to honor Evelyn A. Burke, and witness the rededication of the school. Plaques and a portrait of Mrs. Burke were unveiled at the end of the event.

The new Science and Technology Center at GLTS will house an array of new education programs for students interested in studying Allied Health. Allied Health programs being taught at the school will include home care and nursing instruction, geriatric care (senior citizens and nursing home care) special needs for young children, a CNA program (certified nurses aide) recreational therapy, and medical record keeping as well as a host of others in the field.

Superintendent Vacirca honored Mrs. Burke at the ceremony saying it was “a great day in our school district. So many people have helped along this journey,” referring to the entire GLTS renovation project, which began several years before the groundbreaking took place in 2001.

To get support and funding for the massive project, he said “Evy (Burke), Leo (Lamontagne) and I went from one end of the state to the other. We sang our song and we told our story,” which he said was about more than just a building expansion, but was about creating a state-of-the-art facility for a deserving population of students in the Greater Lawrence area.

“Good enough wasn’t good enough,” he said. “It wasn’t just about a school – it was about the students – they are the heart of the school.” He said the committee “didn’t stray from its goal and mission,” although at times, Vacirca admitted, “we felt like prophets, because at first, no one was listening to us in our own village.”  Vacirca said the top-notch facility would be a major factor toward success for present and future students. “We’ve created a new school and we will create new lives.”

District Committee Chairman Leo Lamontagne said the final project was delivered “on schedule and on budget.” The three and a half year renovation project cost $51 million, twenty percent of which went to site plans, architect fees, permits etc. The state funded 86.5% of the project and surrounding communities paid the balance.   Evelyn Burke was tearful in accepting the honor, telling the scores of educators and observers “I didn’t get here alone,” acknowledging not only her co-chair, but the building expansion committee and the superintendent. “Everyone in this room is connected to this project,” she said. Lauding how the students “give back, as tax-payers, citizens, and volunteers. We have the potential,” she continued, “for being recognized as having what the world really needs.”

The renovated Advanced Science and Technology Wing, dedicated in honor of Evelyn Burke, brought her again to the podium, where she had a surprise announcement, that the Performing Arts Center would be named in honor of Mr. Vacirca. Although visibly moved by the revelation, his sense of humor didn’t fail him. “The superintendent is always the last to know,” he said. He acknowledged a “great District Committee, a wonderful administration and building committee, and a truly dedicated staff.” Vacirca characteristically put the students at the top of the list, acknowledging motivation from “parents who believe that education is the road to opportunity and success.”