By Tom Duggan on September 18, 2015Comments Off on Graham Pledges to Make Trump Ambassador to Mexico: “We have a problem with Hispanics for a reason” 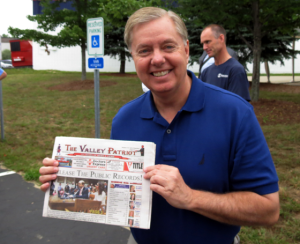 Gina Marini: What is your game plan for the campaign?

Graham: Meet every man, woman and child in New Hampshire, go to all the shooting ranges, all the coffee clubs, and make the case that I am the best prepared to be commander-in-chief to follow Barack Obama. I’ve been to the Middle East 35 times in the last decade; 140 days on the ground as an Air Force reservist and on the arm services committee my entire career, I understand the military and what they need how to destroy ISIL and what Barack Obama is doing is not working we’re going to need to send some ground forces over to Iraq, and eventually Syria to destroy these guys, because if they don’t they’re coming here. When it comes to solving problems, I will work with Democrats, it just makes sense, too much debt, too few jobs.
Marini: How are you going to trump the Trump?
Graham: Just being me … I can tell you one thing having been to the Middle East a lot, if you go over to Iraq and Syria and say we’re here to get your oil for our benefit, not only will you not destroy ISIL, but you will turn everyone in the region against you. There are a lot of people in Iraq and Syria, and throughout the region, who wants to destroy ISIL, but if we come to take the oil, that’s not the way to destroy ISIL. That’s the best way to turn everybody against us. These are serious dangerous times. Barack Obama had no idea what he was doing before he got elected. He has been a very poor commander-in-chief. Don’t replace him with another novice.
Tom Duggan: If you become president is there room in your administration for Donald Trump?
Graham: Yeah, I think we’re going to make him the Ambassador to Mexico.
Marini: Do you think Donald trump is serious about being president?
Graham: I think he serious. It’s about solutions. He tells it like it is. I’m going to tell you like it is. There’s no way in hell you’re going to deport 11 million people. Plus there’s legal children. That never gets to the Senate.
Tom Duggan: Why not?
Graham: Because one, it’s impractical. It’ll cost $100 billion, and if you want to destroy the Republican Party, keep doing this. We have a problem with Hispanics for a reason, because this immigration debate has taken a nasty time. We can’t deport a US citizen [just] because their mother and father are illegal. You shouldn’t try. You should deport felons. You should deport crooks and let the others stay, on the following conditions; learn our language … I don’t speak English well but look how far I’ve come …. pay taxes, and get in the back of the line. And as to the foreign policy, this whole notion of sending an American ground force to the middle east to take their oil, for our benefit would be a disaster, it would be a nightmare for us, it would be a nightmare for our troops, over time we will offer solutions to hard problems, and see what happens.
Tom Duggan: If Trump offered you a job in his administration would you take it?
Graham: No, I would be in the Senate.
Marini: How do you get along with Bernie Sanders in the Senate?
Graham: I like Bernie. He’s my favorite socialist. He’s actually the only one I know. It’s the way the 2015 situation is when you are saying billionaires are out to get you, and the whole system is rigged against the average working person, victims of billionaires and rich people. Donald Trump is saying, “the illegal immigrants are going to rape your wives, steal your jobs, and China and Japan are coming for us all!” The nightmare of all nightmares would be the legal immigrant who became 1 billionaire. What I’m trying to do is tell you what I think I can do for the country, what I think needs to be done, and how to do it.
I’m not trying to scare people. Or make everybody a victim. Rich people are not the reason economy is doing poorly. The reason the economy is doing poorly for the middle class is because Barack Obama has made it to damn hard to create a job. Illegal immigrants are a national security problem, a cultural problem, and economic problem, but most of them are not rapists, or drug dealers, most of them are hard-working people and we are going to find a way to keep them here on our terms.

Tom Duggan: What about the ones that are? The illegals that are rapists and are drug dealers?

Graham: Put them in jail. And then deport them. The guy that killed Kate in San Francisco, Donald said was take all illegal immigrants, take them out of our jails, and send them back. The last thing I want to do is send back an illegal immigrant to Mexico where he may get out of jail, keep him here!Marini: So what does it mean for the Republican Party to have Donald Trump on the top?
Graham: It’s too early to tell. He’s gotten a lot of frustration out; he’s talking about things that people care about. At the end of the day, Hillary Clinton is imminently beatable. If we don’t beat her, who we going to beat, and if we lose to a socialist we might as will hang it up. So, I’ve never seen a better opportunity for the Republican Party to win the White House than I do today.
The problem is, you’re not going to win the White House getting 27% of the Hispanic vote.
Most Hispanics are hard working, entrepreneurial Catholics, very much aligned with our values how we talk about illegal immigration is going to determine our fate. In 2012, Romney said his biggest mistake, was to embrace self-deportation. It’s just not a viable solution. We can’t be on that, even to the right of that. So if we don’t shoot ourselves in the foot, we’re going to win. President Obama’s foreign policy is a miserable failure. Our enemies are emboldened, our friends are scared and another 9/11 is coming, just as sure as I’m standing here. Obama has no clue about what he’s doing. He’s never run a lemonade stand. The reason the middle class is suffering is not because of rich people, it’s because you can’t create a job in this country.
So, I hope what we will do in the process of nominating somebody, is try to grow the party, talk about solutions that really will work to solve the problems. And not tell people things they want to hear out of frustration, but what we can actually do as an American.

Graham Pledges to Make Trump Ambassador to Mexico: “We have a problem with Hispanics for a reason” added by Tom Duggan on September 18, 2015
View all posts by Tom Duggan →