By ValleyPatriot on April 2, 2018Comments Off on Groveland Fire Chief Robert Lay Retires After 44 Years 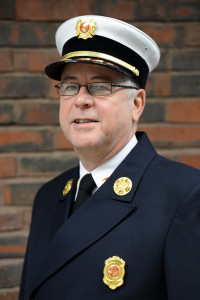 GROVELAND — Fire Chief Robert B. Lay has retired from the Groveland Fire Department after a long career. Lay has served as a firefighter for 44 years, and has spent his entire firefighting career in Groveland.

Groveland’s fire chief is part-time, so in addition to his career in the fire service, he worked full-time for Supermedia LLC from 1973 until his retirement in 2011.

A lifelong Groveland resident, Lay joined the fire department in 1973.

He leaves a very different fire department than the one he joined in the 1970s. “As communities change, fire departments need to grow and change too. It is my sincere hope that I leave the Groveland Fire Department as a more modern public safety agency that is prepared to meet the needs of our residents now and into the future,” Chief Lay said.

“I am proud to have served alongside so many wonderful men and women who leave their homes and families when the alarm sounds in Groveland.”

As Groveland has grown and developed, its population has changed, and the needs of its citizens have changed in kind. The role of call/volunteer fire departments like Groveland’s has been altered significantly. As the rate of building fires has dropped nationally, firefighters are being increasingly called upon for community services, public education and medical emergencies.

Under Lay’s leadership, Groveland earned its Class V ambulance license earlier this year for the Groveland and South Groveland rescue squads, allowing the department to better respond to crises in town by administering medications to those having acute medical emergencies.

Nearly 1/3 of the department’s 31 firefighters are now certified as Emergency Medical Technicians, and by year’s end 2/3 of the department plans to be certified. As call/volunteer departments have struggled nationally with declining membership rates, the Groveland Fire Department has added more than a dozen members during Lay’s tenure. And despite the fact that women only account for 3.4 percent of career firefighters, Groveland Fire is 20 percent female.

Last year, Lay hired five female firefighters, and each successfully graduated from the Massachusetts Firefighting Academy, a mark of skill and professionalism in the field. “It has been a pleasure working alongside Chief Lay as my neighbor and colleague,” said Georgetown Fire Chief Fred Mitchell.

“Working together, mutual aid and emergency medical service has been improved in both of our communities and elsewhere in the Merrimack Valley. Chief Lay has been a true partner, and I wish him all the best in this next chapter of his life.”

Lay’s retirement was effective April 1. Assistant Fire Chief Kurt Ruchala has been named interim fire chief for the near term, and the town will soon announce plans to conduct a search for a new permanent fire chief. Ruchala is a 33-year veteran firefighter who previously served 11 years with the Rutland Fire Department before moving to Groveland. He is a certified fire officer and member of the Massachusetts Fire Training Council, having been appointed by former Gov. Deval Patrick in 2012 and re-appointed by Gov. Charlie Baker in 2015.