LAWRENCE – After years of complaining about Lawrence residents not being considered for top positions at City Hall, City Councilors rejected lifelong Lawrence resident David Camasso by a vote of 5-4 to be the city’s new Comptroller.

Nearly two dozen city residents and community activists turned out for the meeting to speak on behalf of Camasso who has been active on volunteer city boards for more than four decades. No one spoke against Camasso’s appointment.

Voting against Camasso’s nomination were Israel Reyes, Mike Fielding, Pat Blanchette, Carlos Matos and Tower Hill Councilor Nick Kolofoles, all of whom campaigned on the promise of giving preference to Lawrence residents applying for city jobs. 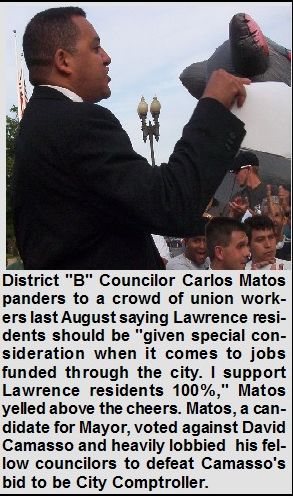 Despite Camasso’s rejection by the Council, Lawrence Mayor Michael Sullivan said he is appointing Camasso as acting Comptroller on Monday, February 8th.

According to a city ordinance spearheaded by Council President Patrick Blanchette in his last term, acting positions can only be filled temporarily for 90 days, after which the position must be vacated and reposted.

“I am appointing David on Monday as acting Comptroller,” Sullivan said after the council voted to reject him Tuesday night.

“The City of Lawrence needs a Comptroller and I know Dave has what it takes to do the job and do it well. I can only hope that when the Councilors who opposed his nomination see what a great job he does, they will reconsider their decision.”

City Councilors who are on the prevailing side of any vote (those who opposed Camasso in this case) can make a motion to reconsider the original vote and confirm Camasso as the permanent Comptroller.

Less than six months ago the very same City Councilors who voted against Camasso Tuesday night (Kolofoles, Matos, Blanchette, and Reyes) stood on the Campagnone Common with hundreds of union members to protest Mayor Sullivan for not ensuring Lawrence workers were being hired on the new Lawrence High School construction project. Councilors were so adamant about the issue that they threatened to shut down the project by withholding funds for not only the high school but the Veterans Memorial Stadium restoration project. .

At that highly charged public rally, Councilors publicly attacked Mayor Sullivan saying preference should be given to Lawrence residents for all city jobs. 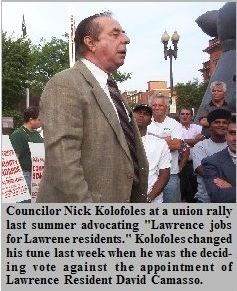 Councilor Kolofoles, (the deciding vote against Camasso) said at the time that the Sullivan administration was not doing enough to appoint Lawrence residents for the city’s top administrative positions.

Standing on a platform before the union workers, Kolofoles promised to “do everything in my power to support the people of this city who want to work. Why should the outsiders get all the high paying jobs?” He asked. “I support residency 100%. These jobs belong to the people of Lawrence!”

In an ironic twist, minutes before Kolofoles and four other Councilors voted against the Camasso ap-pointment, they voted unani-mously to approve Tyngsborough resident John Griffin to be the city’s new Budget and Finance Director.

“David Camasso is a very dedicated Law-rence resident and the whole process reeked of bad faith,” Mayor Sullivan told The Valley Patriot after the meeting.

“I was told by Michael Fielding two weeks ago that he had the votes to kill Camasso’s nomination and I think that kind of politics is really holding the city back,” Sullivan concluded.

“What is surprising to me is that Councilors like (Carlos) Matos and (Nick) Kolofoles, who are the most vocal supporters of giving city jobs to Lawrence residents, were the ones who most strongly opposed the nomination of a guy like Dave Camasso

“ It’s so easy to criticize the Mayor for not hiring Lawrence people, but when they had a chance to put their money where their mouths are, they took a walk. I think the people of Lawrence can see that from the reaction I heard tonight.

District “E” City Councilor Gilbert Frechette said he also believed that Councilors had made up their minds to defeat Camasso’s nomination before a hearing was even held.

“I want to thank the neighbors of Mount Vernon who spoke tonight in favor of Mr. Camasso,” Frechette said. “It’s clear to me that some Councilors made up their mind to vote against Mr. Camasso before we even got the resumes of the candidates. I support David; he certainly needs the support. I’m embarrassed by some of the Committee members.”

At least four Councilors who have promised to give preference to Lawrence applicants for city jobs, (Marcos Devers, Nilka Alvarez, Gil Frechette and Joe Parolisi) made good on their word and supported Camasso.

“In the past I have rebelled against recommendations of the Personnel Committee,” said Councillor Nilka Alvarez, “because I want Lawrencians in these jobs. I just want to make a strong statement in favor of David Camasso. He is very devoted and dedicated to the City of Lawrence.”

Former Council President Marcos Devers said he was very conflicted over the vote and said that he had a great deal of respect for the Lawrence residents who spoke in favor of Camasso. “I have been evaluating the resumes and comparing them. Throughout the five years I have been on this council I have seen employees hired who came from somewhere else and never lived in the City of Lawrence. They get their big fat checks on Tuesday and spend their money in other com-munities. They have no intention on staying and eventually they leave.”

Looking at Camasso, Devers concluded by saying, “I know you care about this city and I know you would not do anything to hurt Lawrence and you have been very dedicated. I am going to support you for this job. You have worked hard and you have earned it.” 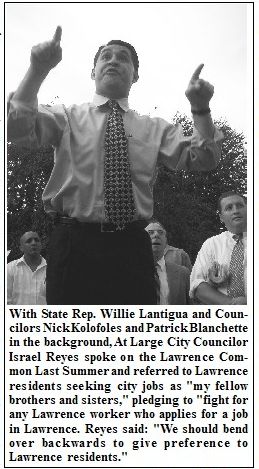 Rumors that State Representative Willie Lantigua was the driving force behind the opposition to Camasso were given new life less than two minutes before the vote to reject Camasso. Lantigua, who had been noticeably absent all evening, walked into council chambers a mere ninety seconds before the final vote, sat in the front row, and nodded to several of the Councilors who then voted against the Camasso appointment.

“It was all politics, plain and simple,” Camasso said after seeing Lantigua’s arrival. I really appreciate all the support I got from the people of Lawrence who spoke unanimously in my favor tonight. It’s no wonder the City of Lawrence has a hard time getting people to apply for city jobs if this is the way they are treated.”

In spite of the highly controversial rejection of Lawrence resident David Camasso for the City Comptroller’s job, Mayor Sullivan said that he is looking forward to working with Camasso as acting Comptroller over the next 90 days and getting the city’s finances back on track.

“One thing for sure ,” Sullivan said, “the City of Lawrence cannot afford to have that position vacant over the next 90 days.