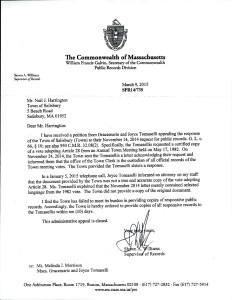 Harrington is claiming that permanent documents being sought by Gracemarie and Joyce Tomaselli (relevant to their suit) do not exist. But that’s not what Harrington’s DPW Director said in court during the first phases of the Tomaselli suit, when he declared that the “town had reviewed the public records”.

In a letter to Secretary Galvin, Harrington stated “[t]he Town does not have records responsive to the December 23, 2014 request of Gracemarie and Joyce Tomaselli.”

The state’s public records retention laws mandate that all records be kept if they are part of an ongoing legal matter. The sisters have filed an appeal with Secretary of State Bill Galvin’s Office asking them to demand Harrington release the public records, and give an explanation as to why the Town is again in violation of a public records law.

Last month, the Tomaselli sisters requested Secretary of State Galvin’s Office refer their case to the Attorney General and Inspector General to force Harrington to comply with state laws regarding public documents.

To date: not one member of the Board of Selectman has held Harrington accountable for his willing violations of the law. There has not been one motion by the board demanding that he comply.

Also to date, the Daily News has concealed Harrington’s misdeeds and lawbreaking. The Valley Patriot has diligently documented over the past two years a myriad of shenanigans by Harrington which the daily paper has either ignored, or covered up by promoting only Harrington’s narrative on each story.

For up to the minute news updates on Salisbury and Harrington’s refusal to release the public records visit valleypatriot.com