By Tom Duggan on May 6, 2022Comments Off on Haverhill High Student Takes Home $4,300 from Valley Patriot Readers at Annual Charity BASH

Haverhill High School Senior Maxwell Bourque received two scholarships and a check in the amount of $4,300 at the Valley Patriot’s 18th Anniversary BASH Scholarship and Award Night.
Bourque took home a $1,000 scholarship from the New England Police Benevolent Association (Thanks to Jerry Flynn and the board) kicking off the first annual Dan Strange Memorial Scholarship. He also received $3,300 collected from an on-line scholarship drive in the name of Michelle DeLuca Benedetti.

Bourque was selected by Haverhill School Committeeman Scott Wood, who screened all nominees for the scholarship.

DeLuca-Benedetti’s brother Ken DeLuca was on hand to present a check with State Rep. Lenny Mirra on hand as well as Boxford Police Chief James Riter, and Valley Patriot publisher Tom Duggan.
Maxwell Bourque is graduating from Haverhill High School and will be attending American International College in Springfield, Massachusetts this fall.

He was recruited by AIC to play football and is majoring in Criminal Justice. Max is an accomplished three season, 4-year varsity athlete for Haverhill High School. He played linebacker for the school’s football team and competed on the winter and spring track teams. He works 30 hours a week at the Sylvan Street Grille in Salisbury while maintaining solid academic status in honors and Early College classes.

The Michelle DeLuca Benedetti Memorial Scholarship was established by her brother Ken DeLuca for a Haverhill High School senior going into Criminal Justice or Social Work in the fall. Michelle (DeLuca) Benedetti, 51, wife of Joseph A. Benedetti, passed away May 30, 2019, at High Pointe Hospice in Haverhill after a courageous battle with cancer. For 21 years she was employed with the State of Massachusetts in the Department of Children and Families as a Social Worker and Supervisor, working in the Haverhill Office since 2001. 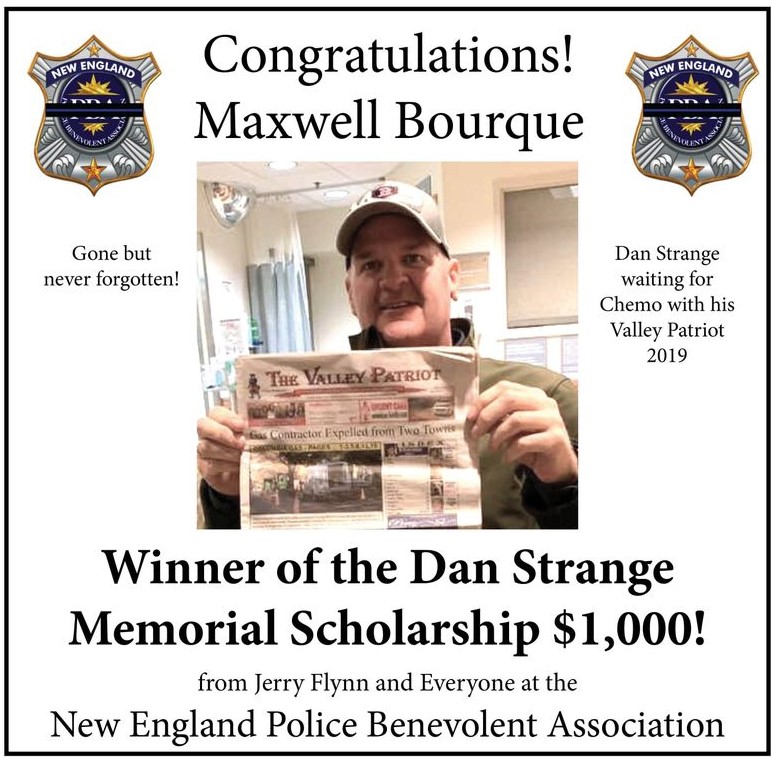 The Dan Strange Memorial Scholarship is in the name of Dan Strange who died in 2020. He was the Valley Patriot’s biggest supporter, a Secret Service Agent, was a member of many law enforcement organizations, including the New England Police Benevolent Association (NEPBA). Dan was the Chairman of the NEPBA Charitable Foundation. He was also the Chairman of the NEPBA Scholarship Fund. WE ALL MISS HIM! ◊