By Tom Duggan on September 8, 2015Comments Off on Haverhill Police Ask for Public’s Help when Robber Threatens to Give Clerk AIDS with Needle 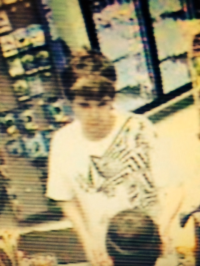 HAVERHILL – According to Haverhill Police, at about 8:30pm Tuesday night, a white male approximately 5′, 8″ to 5’10” tall, entered Cumberland Farms at 426 Lowell Ave , grabbed a can of Coke and approached the clerk, threatening him with  an uncapped needle, pointing it at the clerk, and demanding all all of the money.

According to Lt. Robert Pistone, when the clerk asked if the male was joking, the robber replied “Do you want aids?”

When another customer entered the store the robber appeared to be spooked and fled on foot towards McDonalds . The teen is described as having dark blue eyes , dirty blond hair , scruffy facial hair, wearing a white t shirt and khaki shorts between the ages of late teens to early twenties.

The Haverhill Police are asking for the public’s assistance identifying the male pictured, anyone with info should call (978) 373 1212 where they may leave an anonymous tip if  they wish .”

Haverhill Police Ask for Public’s Help when Robber Threatens to Give Clerk AIDS with Needle added by Tom Duggan on September 8, 2015
View all posts by Tom Duggan →