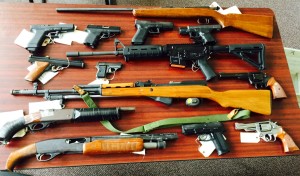 A total of 15 firearms were seized yesterday in Haverhill, including sawed off shot guns, assault rifles, and handguns, as well as a large quantity of illegal narcotics ranging from heroin, Oxycodone pills, marijuana, and cocaine.

To date 27 individuals have been charged as part of the joint investigation involving firearms trafficking, and distribution of illegal narcotics.

“This case remains open, other individuals have been charged, and are being actively sought at this time. The Haverhill Police Department is grateful to the ATF for recognizing the need to disrupt violent gun activity in the city, and committing significant resources that lead to the dozens of illegal firearm and narcotics arrests.” – Detective Captain Robert Pistone

“As a result of a joint investigation involving municipal, state and federal law enforcement agencies twenty-seven dangerous individuals were apprehended. Many of those targeted in this campaign are extremely dangerous individuals who posed a significant threat to the safety of our citizens. We feel confident that the city and the region is a lot safer with these individuals off the streets.”- Haverhill Police Chief Alan DeNaro

“ATF is committed to working with our law enforcement partners to combat violent crime and to keep guns out of the hands of violent offenders, which remains our top priority” – ATF Special Agent in Charge, Daniel J. Kumor

Charged and arrested prior to 10/14/15 as part of Haverhill PD/ATF investigation: