By Tom Duggan on August 5, 2009Comments Off on Hazardous Waste Leak in Lawrence 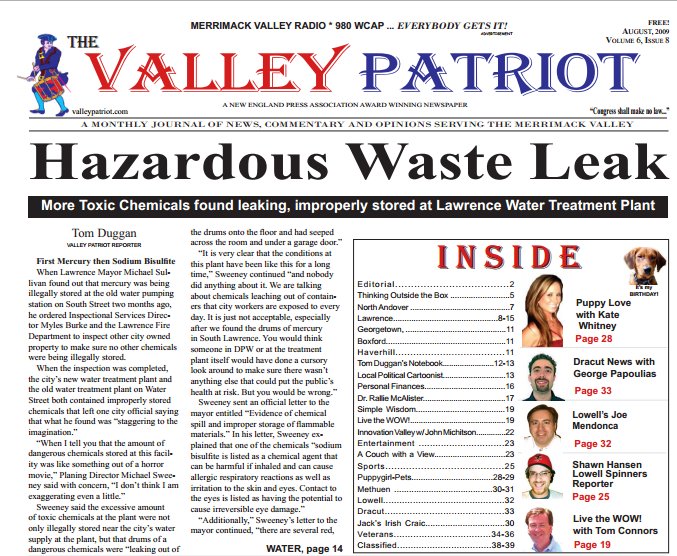 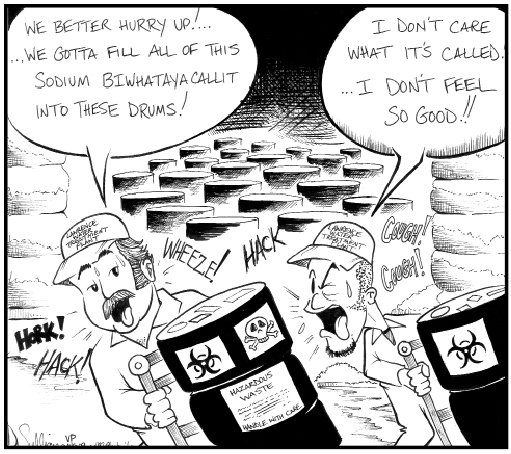 Street two months ago, he ordered Inspectional Services Director Myles Burke and the Lawrence Fire Department to inspect other city owned property to make sure no other chemicals were being illegally stored.

“When I tell you that the amount of dangerous chemicals stored at this facility was like something out of a horror movie,” Planing Director Michael Sweeney said with concern, “I don’t think I am exaggerating even a little.”

Sweeney said the excessive amount of toxic chemicals at the plant were not only illegally stored near the city’s water supply at the plant, but that drums of a dangerous chemicals were “leaking out of the drums onto the floor and had seeped across the room and under a garage door.”

“It is very clear that the conditions at this plant have been like this for a long time,” Sweeney continued “and nobody did anything about it. We are talking about chemicals leaching out of containers that city workers are exposed to every day. It is just not acceptable, especially after we found the drums of mercury in South Lawrence. You would think someone in DPW or at the treatment plant itself would have done a cursory look around to make sure there wasn’t anything else that could put the public’s health at risk. But you would be wrong.”

Sweeney sent an official letter to the mayor entitled “Evidence of chemical spill and improper storage of flammable materials.” In his letter, Sweeney explained that one of the chemicals “sodium bisulfite is listed as a chemical agent that can be harmful if inhaled and can cause allergic respiratory reactions as well as irritation to the skin and eyes. Contact to the eyes is listed as having the potential to cause irreversible eye damage.”

Sweeney notified water department personnel not to move any of the chemicals until proper assessment can be made and a plan of action can be put in place to have them safely cleaned up and removed.

Lawrence Mayor Michael Sullivan said he was shocked at what Sweeney found at the plant and lamented that “for a long time people have not been doing what needs to be one over there. It’s clear that someone is not doing their job and there is no oversight at that plant. First, we got fined for not testing for chlorite in the drinking water last year. Last month we learned we were getting fined again for not testing for E.coli in the drinking water for eighteen straight months. The DEP (Department of Environmental Protection) is not fooling around here, there are strict standards about how to do things when you are dealing with the public’s drinking water and it’s not getting done. Now, there’s this new discovery of chemicals even after the mercury we found in June that was sitting there for more than three years.”

Sullivan said that it is going to cost the city thousands of dollars to clean up the hazardous waste at the plant and on top of the fines levied by DEP are putting a serious financial burden on the city because of mismanagement of the water department. “We are already over a million in the red and when you add all the fines and the cost for cleanup for this kind of hazard you really have no choice but to start looking at raising water rates to cover the cost.”

Within hours of Sweeney finding the hazardous waste at the new $26 million water facility plant, foreman Mark Griffin abruptly handed in his resignation.

Additionally the Lawrence Fire Department placed the giant red “X” on the outside of the old water treatment plant building located on Water Street, at the base of Tower Hill. Traditionally the Fire Department only places the giant red “X” placards on buildings that are too dangerous to enter, even if a fire is active on the premises. The amount and variety of improperly stored chemicals left in the old water treatment plant was simply too much of a risk to place fire fighters in danger. 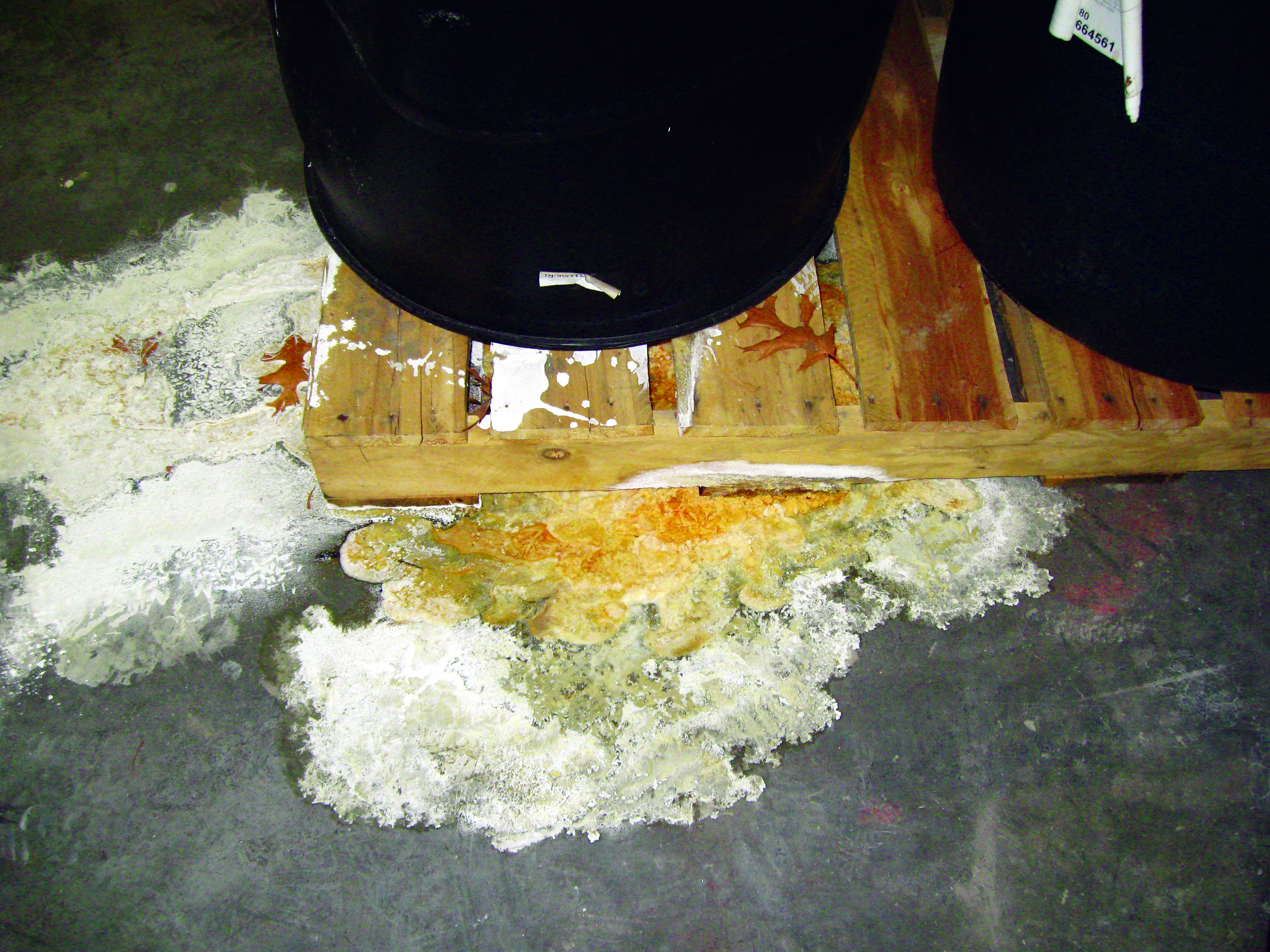 treatment facility failed to test the city’s drinking water for E.coli from July 2008 to February 2009. The Massachusetts Department of Environmental Protection (MassDEP) requires monthly testing for E.coli which can cause sickness if consumed.

In October of last year the state fined Lawrence $5,000 for failing to test for chlorite in the drinking water and ordered the city to fix a host of mechanical, maintenance and procedural problems at the facility. In February 2009, MassDEP warned Lawrence officials that the list of violations at the water plant from that October fine had not been addressed. As the result of operators at the plant failing to address those issues the state hit Lawrence with $47,750 in penalties.

Lawrence City Attorney Charlie Boddy said that the issue of non-testing and the other safety violations found by MassDEP need to be addressed immediately, “especially given that it’s the second fine in less than a year.” Boddy explained that despite the presence of the private contracting firm Woodward and Curran operating the plant, it is the city’s responsibility to do testing and report those mandatory tests to the MassDEP.

“We’re in a difficult situation because there are issues with regard to supervisory oversight at the water treatment plant,” Boddy said. “Those issues will be resolved once we get a long-term contract in place. But absent a long-term contract, those issues will remain because Woodward and Curran is unwilling to take responsibility for these testing issues that they are not obligated to do. They are working on a temporary contract and as long as they are, they are not obligated to do water testing or provide oversight. That responsibility falls on the city. Woodward is not being compensated for these responsibilities and they won’t be. Not until they have a contract that clearly spells out those testing responsibilities at the plant.”

In the mean time, the Lawrence City Council has refused to ratify a long-term contract with the Woodward and Curran despite several attempts by the mayor to move the management of the water treatment facility from the city to the private firm.

“Because of their inaction we have really been in limbo on this,” Sullivan said. “Every day that Woodward is working without a contract these safety issues and violations are going to continue.”

Sullivan said that he had tried several times to get the council to approve a contract for Woodward and Curran to ensure that the plant was being run properly and that drinking water was safe.

“But they simply refused to do that. In fact, they have been sitting on this issue for a very long time and they won’t even bring it up for discussion. So, while they sit on their hands and play politics, we don’t get a resolution to these very serious issues.”