By Tom Duggan on March 26, 2013Comments Off on Heal Lawrence Networks to Help Fire Victims Pt. 1 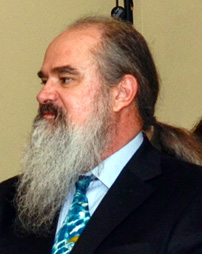 The Great City of Lawrence may no longer be the arson capital of the world but the family devastation left behind by weekly house and apartment fires in the Mill City continue.

Often times with just the clothes on their backs these families have to start rebuilding their lives from scratch.

“I came up with the idea of using Heal Lawrence, a nonprofit group, as an on-line register, like a wedding registry, where we can find out who needs help, what kind of help they need and then network with the different organizations and individuals in the area to fill that need,” said Wayne Hayes, president of the Mount Vernon Neighborhood Association and fonder of Heal Lawrence.

“When a family is the victim of a fire they have to find a place to stay and it’s really hard to find out where they are and what their needs are.” said Lawrence Firefighter Manny Gonzalez one of the Heal Lawrence coordinators.

“Through Heal Lawrence we set up a website where we can identify what they need and put a call out to the community to go to the website and let us know what they can give. Then we match it up to what the victims need and make sure we can get things to people”

Hayes and Gonzales say they have received a tremendous amount of response from members of the community who have donated hotel stays, put down their credit cards to extend hotel stays, and donated furniture, restaurant and grocery story gift cards, curtains, blankets and sometimes transportation.

“The Red Cross pays for three nights at a hotel or motel and then they are pretty much on their own. Through Heal Lawrence we have been able to offset that and give people a little more time to start putting their lives back together.”

Hayes says that they don’t receive and do not encourage cash donations as gift cards and services are easier to track and help avoid any kind of fraud.

“When my house burned down on Lafayette Street near Christmas time we needed a lot of help, and a lot of things we never even thought we would need,” said Rose Matias whose mother and three siblings were instantly homeless last December when their home was destroyed by fire.

“Juan from Heal Lawrence got our number from a news station and called us and started scheduling reporters to come speak with us so that we could get some help. They asked us to make a list of what we needed, so we made a list turned it over to Wayne and he sent the list out on the internet through Facebook and their website. People from all over started calling,” she recounted. “All of a sudden there was a lot of people calling with other stuff they had for donation, Wayne got a garage, came over with a couple of guys and they showed up at my house to drop off the items. It was amazing. We are so grateful for them and all the people who reached out, but it wouldn’t’ have happened at all if it wasn’t for Heal Lawrence.”

Rose, an 18 year old college freshman at Daniel Webster College, said that at one point a good Samaritan heard that she was in college and needed a laptop after the fire. “One of the Heal Lawrence people donated a laptop so I could do school work, I really can’t say enough for them. It was really nice.”

Hayes and Gonzalez said that they took a U-Haul truck and through the database registry they set on the Heal Lawrence website they were able to deliver exactly what the Matias family needed.

“We just got a bunch of guys and moved in all the furniture and items that were donated based on the need that they had.”

When asked why they spend so much of their free time helping victims of Lawrence fires Hayes and Gonzales told the Valley Patriot that it’s really just to make a difference.

“Personally, my thought was just to be giving back to the community,” Gonzales added. “I personally know what it’s like for these people suffering because I was out of my house for 12 days when my house flooded in the Bennington Street area. Back then I was the recipient of people’s generosity. So, I thought fires in Lawrence happen all the time and those people need the same kind of help. As a Fireman there’s really nothing we can do for these families except put out the fire. So I got together with my good friend Wayne and we started working together.

Gonzales says he is pitching the United Way with an idea of combining their resources with Heal Lawrence’s on-line registry of what is directly needed at any given time.