By ValleyPatriot on June 8, 2018Comments Off on Hero in Our Midst, Angelo Dindo ~ The B29 Air Offensive vs. Japan ~ VALLEY PATRIOT OF THE MONTH 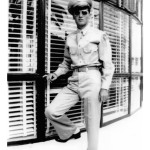 May 28th was Memorial Day. This story is to help start us on our reflections of what that day means to each of us and our families

The Army Air Corps selected him to be trained as a radio operator at Scott Field, Illinois, and after completing training he was initially assigned to patrol the relatively quiet Caribbean Theater hunting German submarines flying on B24 Liberators.

In 1944, Sgt. Dindo was reassigned to Salina, Kansas to be trained as a B29 Radar Operator. After training, he deployed to Saipan, which along with Guam and Tinian, are part of the Marinas Islands. Assigned to the B29 V-11, these bombers were often called “Ships” by their crews. The U.S. Army Air Corps unit that Sgt. Dindo flew his missions with, was the 877th Squadron, 499th Bomber Group, part of the 73rd Bomb Wing.

Primarily manufactured by Boeing, which even after over seventy five years passing since VJ Day, (Victory over Japan Day) the company still boasts of the plane’s abilities on its web site. Tested in flight for the first time in 1942, the B29 Superfortress was crewed by eleven men, (some models ten men), five officers and six enlisted men. Four 2,200-horsepower Wright Double Cyclone engines powered the 105,000 pound B29 Bomber. The plane had a top speed of 365 mph, and a cruising speed of 220 mph. Defended by twelve .50-caliber machine guns and one 20 mm cannon. The crew could deliver a devastating 20,000-pound bomb load on the Empire of Japan.

According to the official U.S. Army reports on Dindo’s bomber V Square 11’s April 1945 mission, declassified in 1958, these documents state that B29 V Square 11 (Tail 3483) on April 24, 1945 successfully bombed its primary target, and continued in formation to bomb a secondary target. Hit by a Japanese Fighter over its secondary target, the bomber managed to stay in the formation for about three minutes. Smoke started to come from the cockpit and right wing. Ten crew members (this B29 had a crew of eleven men) were seen to jump from the burning plane by other crews in the formation. B29 Aircraft V Square 53 (Tail 4670) descended to an altitude of 400 feet in the area where the parachutes hit the ocean, and dropped a lift raft to the crew. 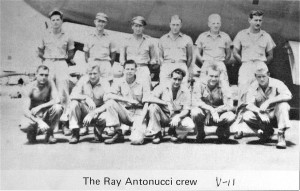 Of the eleven B29 Bombers in the formation on April 24, 1945, nine return to Saipan successfully, Sgt. Dindo’s bomber V Square 11 was shot down by a Japanese fighter, and another B29 V Square 6 (Tail 4683) was forced to perform an emergency landing on the Japanese Island of Iwo Jima, secured by U.S. Marines on March 26, 1945, less than a month earlier. U.S. Navy Seabees were working twenty-four hours a day, seven days a week to keep the island’s three airstrips operational.

According to Louis Dindo, Sgt. Dindo’s only brother, just the bomber’s tail gunner, a Sgt. Jack Kropf, survived the war. Sgt. Kropf was repatriated from a Japanese POW camp at the end of the war. In his report after being released from the POW camp, Sgt. Kropf said he was the last man to bail out, and landed by himself in the water. He found the life raft that was dropped and climbed in. He was picked up by the Japanese Navy, and spent the last months of the war as a POW.

The body of the pilot, Lt. Ray Antonucci, who was also senior officer on the bomber, was found by a Japanese fisherman two miles off shore and buried in Japan. After the war, the fisherman was kind enough to show troops from General of the Army Douglas MacArthur’s “Army of the Occupation of Japan” where the body was buried.

Pilot Ray Antonucci was identified from the Army laundry markings on his uniform. Unfortunately, nothing else is known that confirms the fate of the other nine men. Including this month’s “Hero in our Midst”, Sgt. Angelo Dindo, U.S. Army Air Corp, who is still loved by his brother and in the prayers of his family. Sgt. Dindo is Missing in Action, (MIA), since his remains have not been recovered, he is still on watch, still serving our nation. Sgt. Dindo is forever twenty-six years old. Memorial Day has a special meaning for his brother Louis Dindo, and Louis’s family.

We celebrate two military holidays in May. Armed Forces Day, May 19th this year, which honors the young men and women currently serving in the U.S. Armed Forces.

The other, a holiday almost sacred to those of us that wore our Nation’s uniform, is Memorial Day on May 28th. Memorial Day is not meant to honor our Nation’s Military Veterans, that is what Veteran’s Day is for on November 11th. Memorial Day is for the 405,399 men and women who did not return from World War II,and many more who did not come home from Korea, Vietnam, and the Gulf Wars. Every Memorial Day, I think of Robert Dean Stethem, a United States Navy Seabee Diver 2nd Class, who was 24 years old, when murdered by Hezbollah terrorists during the hijacking of the commercial airliner he was aboard, TWA Flight 847 in June of 1985.

I also say a prayer for Seabee Construction Electrician Second Class Thomas Orr, who died while repairing a runway at U.S. Naval Base Roosevelt Roads, Puerto Rico in September of 1989 after Hurricane Hugo. I talked to him just an hour or so before he died. Born and raised in Lawrence, I think of the eighteen young men from Lawrence, not much older than me, who did not return from Vietnam.

To honor those who will never be able to celebrate Veteran’s Day – I challenge everyone reading this article to spend their Memorial Day in some meaningful way, honoring those who gave their lives serving our great Nation. Please do not go shopping, or attend the “Memorial Day Sale at the local Car Dealer”. Instead, attend church, plant flowers at a Veteran’s or loved one’s grave, hang the American Flag out at your home.

Some even better suggestions, take your grandkids to a zoo, take your children to a park and toss a football, spend time with an elderly relative on Memorial Day. If you have a cookout, how about inviting the neighbor you do not know, or an uncle, who drives you crazy, but has no one else. And say a pray for the men and women who gave their lives for our Nation. Memorial Day belongs to Sgt. Angelo Dindo, U.S. Army Air Corps. Memorial Day belongs to the more than 400,000 men and women who did not come home from World War II. Memorial Day does not belong to a Mall, a Car Dealer, or a Golf Course.

John Cuddy is retired from the U.S. Navy’s Construction Battalions (also known as the Seabees) after retiring from the Navy, earned a BA History and an MA Economics from the University of Massachusetts at the Lowell Campus. He has been employed in Logistics at FedEx for the last 21 years. If you know a World War II Veteran who would like their story told, please email him at John.Cuddy@Yahoo.com.

Hero in our Midst, John Cuddy, Valley patriot of the mnth