By ValleyPatriot on March 6, 2006Comments Off on Hero in Our Midst – Ed Mitchell – Valley Patriot of the Month, March, 2006

NORTH ANDOVER- An electrical short circuit had forced early termination of the dive of the Navy’s Deep Submergence Research Vehicle, Turtle. As the Turtle returned to its support ship and was loaded on board, the electrical problem turned into a raging fire that threatened the sub, the support ship and the entire crew.

The fire was dangerously close to several tanks of a flammable ballast liquid and was also approaching the sub’s batteries where hydrogen was present. If the fire reached either of these areas, the resulting explosion would have sunk both vessels and killed all aboard.

The crew quickly determined that the only way to fight the fire was to get the Turtle back into the water. As young Petty Officer 3rd class Ed Mitchell fought the fire with a 4″ fire hose, his crewmates sealed the Turtle’s hatch, unfastened the tie-downs and released the research sub off the stern of the boat into the water. The sea quickly put out the fire to the relief of all. Although the Turtle was almost completely destroyed, there were thankfully no injuries during the harrowing ordeal.

The life of a submariner is filled with challenges and dangers as these Navy elites patrol the oceans of the world keeping the U.S. safe from its enemies.

Ed Mitchell, Veterans Agent for North Andover and Boxford, spent 18 years on various submarines, much of it during the cold war with the Soviet Union.

Ed grew up in Franklin, Mass. and graduated from Tri-County Vocational School in 1980. Ed had no real plans for the future and when a buddy of his called and said, “I’m picking up a case of beer and then think I’ll go down and join the Navy. Want to come?” Ed said, “Sure,” and that was the start of his long career. 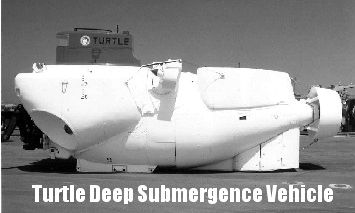 The Navy recruiter was a submariner and talked the two of them into applying for submarine school. The extra $135/month in pay also seemed attractive to two young single guys. After eight weeks of boot camp at the Great Lakes Naval Training Center in Illinois, the pair were sent to the U.S. Naval Submarine School in Groton, Conn. Here they were taught the fundamentals of submarines, the basic operational systems, safety and survival in emergencies. Part of the training included a visit aboard an actual submarine and, after that, Ed’s buddy decided he wasn’t cut out for the close quarters of submarine service. Ed was now on his own.

Ed Mitchell’s first orders were to report to the nuclear-powered USS Will Rogers, a fleet ballistic missile submarine carrying 16 nuclear-tipped Poseidon missiles. These subs are nicknamed “Boomers” and patrol the seas to deter an enemy’s nuclear attack on U.S. soil. Their main objective is to patrol undetected from other navies.

The Will Rogers had two crews of about 120 men each. There was a Blue crew and a Gold crew, and they alternated operating the submarine at about 3-month intervals. Ed was part of the Blue crew. This schedule gives a crew 3-months of shore duty between deployments, so that they can live a somewhat normal life. While on patrol, the sub would typically spend at least two months at sea somewhere in the North Atlantic. Ed went on four patrols with the Will Rogers and recalls that at one point they were submerged for 72 days.

Ed started off on the sub as a Seaman Apprentice and, as was typical, was assigned to galley duty. Here he worked 14 hours a day preparing food and keeping the area clean. Next to fire, one of the worst fears on board a sub is a sickness which could disable an entire crew. Cleanliness was paramount to safety.

Here Ed learned that one of the most important components on a sub was the ice cream machine. No sub would leave port without a fully functioning ice cream machine. “It’s critical for crew morale,” he says. Although the machine only produced vanilla, Ed decided to see what would happen if he added coffee to the ingredients. His coffee ice cream was a big hit and he went on to try blueberry pie filling, orange and chocolate to the crew’s delight. 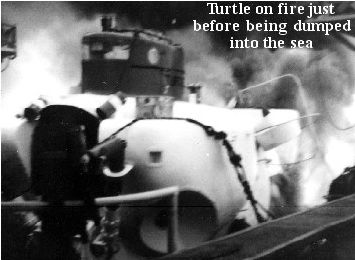 During Ed’s assignment on the Will Rogers, his first priority was to get his “Dolphins.” This is a pin similar to the wings that aviators earn, but is reserved for the submarine service. It takes a year of hard work and a lot of studying to have the Dolphins pinned on your uniform.

Besides the galley work, Ed’s primary battle station was as the Missile Compensator. This required him to shift ballast around the sub to keep it level while missiles were being launched and seawater filling the now empty tubes. A stable and level firing platform is critical to the safe operation of a submarine in missile launch mode.

After two years on the Will Rogers, Ed was sent to San Diego and assigned to the Turtle. This experimental deep dive submarine was part of the Navy’s Submarine Rescue Unit and had a crew of 13 specialists that operated and supported the vessel. Its major function was to search, locate and recover disabled submarine sections.at great depth. Ed and the crew practiced constantly and also worked closely with scientists exploring the ocean’s seafloor. Ed is proud to report that his deepest dive was 9,994 feet. It’s safe to say that not many people in the world have been that far below the surface of the ocean.

After five years with the Turtle program, Ed was assigned to shore duty at the Naval Ocean Systems Center in San Diego where he was responsible for six torpedo recovery boats involved in torpedo research and development. Although Ed had been promoted several times during his career, it was here that Ed decided he wanted to become a Chief Petty Officer. As he explained, there is an old saying, “The Chiefs run the Navy.” The modern version is, “The Chiefs make the Navy run.” 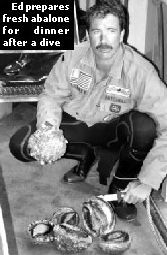 So Ed cut his shore duty short and in 1990 he returned to the East Coast where he was assigned to the USS George C. Marshall, another Boomer. After two primary deterrent patrols, the submarine was ordered decommissioned as a result of military cutbacks after the end of the cold war. The sub was sent to Washington State to be cut up and scrapped. Ed still has the original nuclear missile launch trigger from the Marshall as a souvenir from its active days.

It was during Ed’s duty on the George C. Marshall that he was reacquainted with and married North Andover native, Diana Koebrick. As children, Diana and Ed had spent summer vacations at their grandparents’ cottages on Little Island Pond in Pelham, N.H. They currently have two daughters, Lauren, age 13, and Colleen, age 8, who also enjoy their summer vacations at Little Island Pond.

Although now married, Ed’s active submarine career was not over. He was subsequently assigned to the nuclear-powered USS Groton, a fast attack submarine carrying high-tech torpedoes and Tomahawk cruise missiles. The Groton’s primary function was to shadow Russian subs while undetected. Ed remembers great ports of call all over the Mediterranean, but one incident in Turkey he will never forget.

The Groton was tied up at the dock when a sudden and violent storm erupted. The waves were crashing over the hull and water was washing into the forward hatch. Most of the crew was out on liberty, but Ed and the others on board knew they had to immediately take the ship into deeper water to keep it from being damaged. With only a third of the crew, they quickly backed away from the pier without even removing the mooring lines. They now had ropes dangling in the water, a skeleton crew and an air purifying system that was down for repairs. Until the storm passed, the Groton spent the night circling in the harbor, in reverse to prevent the ropes from entanglement in the propeller, and on the surface for fresh air. It was not pleasant.

After six months on board the Groton, Ed was promoted to Chief Petty Officer. A year and a half later, Ed was once again transferred to shore duty. This time he became an instructor and curriculum developer at the Navy’s Submarine School in Groton.

It was here that he had his back operated on because of an old injury he had received on the Turtle. He had two discs removed and a spinal fusion. Several years later, when it was time for Ed to go back on board a submarine, the medical doctors told him his sailing days were over. It was now 1998 and Ed had 18 years of service in the Navy. He could have stayed in for his 20 years with shore duty, but Ed felt that it was time to give some other deserving Navy officers an opportunity and decided on early retirement.

After leaving the service, Ed had to have another back operation. Finally, after a long recovery, Ed was feeling better and felt he could return to work. In 2000 he became the Veterans Agent for North Andover and Boxford. Chief Petty Officer Ed Mitchell, thank you for your service and the many years of sacrifices you made to keep our country out of harm’s way.

If you would like to nominate a veteran to be honored as a Valley Patriot of the month, please call us at (978) 557-5413 or email us at ValleyPatriot@aol.com