By Dr. Charles Ormsby on August 5, 2005Comments Off on Hero in Our Midst – Jim Mulligan – Valley Pariot of the Month

Bound, blindfolded and badly injured, Captain Jim Mulligan was led through the angry crowd of Vietnamese peasants. They screamed in Vietnamese while striking him with sticks and pelting him with stones. He was then placed on a mound of freshly dug earth while a man made a loud and strident speech to the angry crowd. “My God, it’s a grave,” he thought, “The little bastards are going to execute me.”

It was March 20, 1966 and only hours before, Jim Mulligan, who was born and raised in Lawrence, Mass., was leading a flight of three Douglas A4C Skyhawk aircraft on a bombing mission over North Vietnam. The target was a suspected bridge on a dirt path being used to transport communist troops and military supplies to South Vietnam. 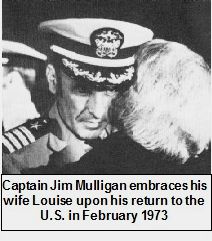 This was Jim’s 80th combat mission; the previous 79 were completed without a scratch. This mission, seemingly routine, ended differently. Hit by ground fire while flying only 100 feet above the terrain, Captain Mulligan’s Skyhawk controls became stuck and, after being hit by additional flak and trying to switch to manual control, the plane went into a spin. Bailing out was the only option. Jim’s wingman saw his chute and, after another pass, saw Jim on the ground, motionless. It wasn’t until four months later that Jim’s wife Louise learned he was still alive.

Captain Jim Mulligan joined the U.S. Navy on February 9, 1944 and received his wings in August of 1947. He served in World War II, Korea and Vietnam. Jim served on twelve different carriers, accumulated over 5000 flight hours and made 650 carrier landings – over 150 at night – during his 31-year military career. But that was the fun part. Starting on that fateful March day in 1966, Captain Mulligan would need all the strength and character he could muster to survive seven hell-filled years of captivity in the hands of the brutal North Vietnamese.

The cruelty of the North Vietnamese communists seemed to be unbounded. His mock execution was merely the opening act. While being transported to Hanoi, Jim’s hands were bound so tightly that over time the ropes “buried themselves in my flesh causing large festering infections which oozed green pus. My fingers were swollen blue and made my hands look like a mass of purplish blue meat.” The fact that a sadistic guard had poured gasoline on his wounds several days earlier – to entertain a crowd who delighted in his screams – probably didn’t help.

Jim’s first prison was at the Hanoi Hilton. Several weeks later he was sent to “The Zoo” where he was placed in solitary confinement. Approximately 60 POWs were confined at the Zoo when Jim arrived and they had a tap-based code consisting of a 5 by 5 matrix for a 25-letter alphabet (C was substituted for K). Jim learned the code the first night he was exposed to it. The code permitted very efficient communication. “TXFT help GN GB” translated “Thanks for the help. Good night. God Bless.” 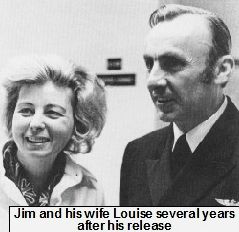 Interrogations were constant. Jim, as Senior Ranking Officer (SRO) at the Zoo, upheld the policy of non-cooperation initially set by Cmdr. Jerry Denton, the previous SRO … no writing or taping in response to interrogators’ requests. In addition to not cooperating, Jim took very risky steps to stop abuse of prisoners by guards that exceeded those punishments authorized by camp commanders.

The Vietnamese initiated a re-education program and required prisoners to choose their level of cooperation. Your level of cooperation determined how you would be treated. Jim, along with many others, refused to choose. For this he was sent to the “Auditorium,” a section of the prison that was particularly squalid and mosquito infested, not to mention that the water was rumored to be poisoned. Jim decided to “eat nothing, drink nothing, and do nothing.” He placed himself in God’s care. For five days he refused food and water and teetered on the brink of death until the Vietnamese capitulated. He was then given increased rations and better – although even more isolated – living quarters without having to cooperate with the reeducation program.

Solitary confinement, poor or non-existent lighting, temperature extremes, lack of exercise, poor diet, dysentery, tapeworms, leg irons, beatings and torture, all took their toll. Jim and most of his fellow POWs resisted daily beatings and torture well beyond the point that we, who enjoy the freedoms they fought for, can possibly imagine. If freedom could be expected at a time certain maybe such abuse could be withstood, but there was no known end-point to their suffering. They didn’t know when they would see their loved ones, if ever. The mental anguish seems impossible to comprehend.

While Jim and his fellow POWs suffered, many of America’s elite, and much of the American press, gave aid and comfort to the enemy while rarely acknowledging the abysmal treatment of our servicemen. Propaganda broadcast within the prisons made maximum use of comments made by the American fifth column that supported the communists’ efforts. It was difficult enough for our POWs to survive the torture and starvation imposed by the enemy; it was unforgivable that they also had to hear their countrymen supporting the enemy and condemning the sacrifices U.S. servicemen made in the cause of freedom.

Just when things seemed unbearable … they got worse. Jim was sent to Alcatraz, an area designated for the “Die-Hards.” Jim had been told that those who wouldn’t cooperate would be put in small, dark cells, have no sunshine or exercise, bad food, and no medicine. This was it. Eleven POWs were selected for Alcatraz including Jim and several other well-known POWs such as Cmdr. Jerry Denton and Cmdr. Jim Stockdale (later to become Ross Perot’s Vice Presidential running mate).

Jim was allowed only two small cups of water each day. A picture of his cup, brought back when he was released, appears nearby. Conditions were so bad that Jim hoped American bombs, which occasionally landed nearby, would hit his cell. He fought to retain his mental faculties by recalling events as far back as he could … the oldest being a family trip to Salisbury beach when he was just two years old.

His ten-by-four-foot cell went from freezing in the winter to 130 degrees in the summer. At one point he begged God for rain and relief from the heat.

“In only a few minutes I heard the first patter of large raindrops which rapidly grew into a torrential tropical rain. The wind blew the cold air into my cell … the temperature dropped forty or more degrees and my cell cooled off miraculously. Thank you, Lord, thank you, Lord,” he said repeatedly.

Shortly thereafter a relentless program of torture by the guards commenced. It would not stop until either the prisoners agreed to write apologies or die. Faced with unspeakable pain, exhaustion and certain death, Jim finally wrote what was dictated to him. When the torture abated, the prisoners returned to the “No write, no tape” policy. With only a few exceptions, and much to the consternation of the camp commanders and guards, the POWs refused to cooperate with the communists’ attempt to extract propaganda through brutality … propaganda that the likes of Jane Fonda gave them willingly.

Nixon’s massive Christmas bombing campaign of Hanoi in 1972 was music to the ears of Jim and his fellow POWs. It quickly brought the Vietnamese to the peace table and an end to the war in early 1973.

Captain Jim Mulligan spent 2522 days in captivity, or nearly 7 years. He was released on February 11, 1973 and carried with him his drinking cup and the names of the 459 POWs that he had either seen, heard or was told had been taken alive by the North Vietnamese. He had built this list from his first days in the North and repeated them over and over so he would never forget them.

Captain Jim Mulligan, thank you for your service, your personal courage and your resilient character that brought you through this ordeal.

Author’s note: A recounting of Captain Mulligan’s years as a POW is provided in his book, entitled, “The Hanoi Commitment,” published in 1981 by Teagle and Little, Inc., (c) by Jim Mulligan. All quotes and pictures in this article are taken from the book. Jim and Louise currently reside in Virginia Beach, Va.