By Tom Duggan on May 28, 2007Comments Off on Hero Veteran Speaks at Memorial Day Service in North Andover

Memorial Day Services were held all around the Merrimack Valley today in honor of those who lost their lives serving the United States Armed Forces. In North Andover, Massachusetts, Valley Patriot of the Month, Thomas Hudner, a Medal of Honor recipient, spoke to the hundreds of onlookers about the sacrifices made by the men and women of the United States Military. His speech is published below.

and several others who participated in the honoring of our servicemen and women.

(As a side note, I found it amazing that those who proclaim to support the troops, but not their mission in Iraq, were NOWHERE to be found today in Lawrence or North Andover (and I suspect around the nation) when our brave troops were being honored. If these cowards who reiterate the propaganda of our enemies while pretending to support our troops really and truly cared, why are they ALWAYS noticeably absent whenever Memorial day, Veteran’s day or other days of commemoration for the troops roll around? The Valley Patriot would like to thank all those who honored our heroes today, and in their memory we have been granted permission from World War II and Korean War Hero Thomas Hudner to post his speech given at the Ridgewood Cemetery in North Andover Massachusetts at noon time today.)

It was 232 years ago, within a day’s march of where we are now gathered, that the first shots were fired in Concord that marked the start of a war that changed history. It signaled the start of “A new nation, conceived in liberty and dedicated to the proposition that all men are created equal.”

In that battle and the ensuing war, a tiny nation stood up to the world’s greatest power in its quest for freedom. Because of brilliant leadership, a dedication to the belief that all mend are created equal and a relentless determination to attain liberty in the face of almost insurmountable hardships, that small group of colonies conquered its former oppressor and has since evolved into the greatest nation in the history of mankind.

Close by are memorials to all those patriots of generations past who gave their lives to preserve those liberties, not only for us Americans, but also for the people of those nations around the globe who looked to us to attain or maintain theirs.

Today we are observing Memorial Day which commemorates all those who gave their lives in the defense of that “New nation’s freedoms and equality of all men which are articulated in our Declaration of Independence and our Constitution. It is an occasion for the American people to reflect on the sacrifices in human lives which led to the independence and the growth and the maturation of our country and of the freedoms we now enjoy.

My generation has experienced three major wars; World War II, The Korean War and the Viet Nam War. World War II was fought by the great generation of Americans who saved the world from fascist aggression and secured the blessings of liberty or hundreds of millions of people around the world. Four hundred thousand American sided in that war and of over 16 million who fought in it, less than 4 million are still alive today. And, 100,000 more American lives were lost in Korea and Viet Nam in the cause of freedom. 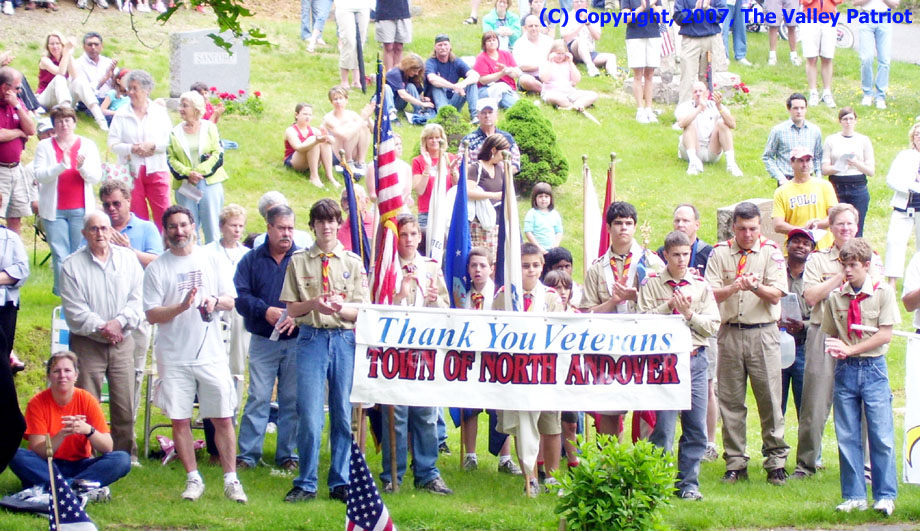 Today, their descendants are fighting a global war against terrorism. They are serving and sacrificing in Afghanistan and Iraq and at other outposts on the front lines of freedom. The lives of every one of them are precious to their loved ones and to our nation. And each life given in the name of liberty is a life that has not been lost in vain.

This war in which we are now engaged, truly another world war, is a vicious guerrilla war, one in which religious zealots are determined to destroy us. It is a war between two cultures, one which values life and the dignity of man and the other which considers that any lives sacrificed for violation of Islamic Law, regardless of sex or age, are a tribute to Allah.

Although most fighting is in Iraq and Afghanistan, the enemy is striking in locations all throughout the world, intent on destroying the civilized world we live in. And it WILL be a long war.

We have taken the position that the terrorists must be confronted and destroyed where possible. We offer prayers every day for the safety of our troops and for their success in subjugating the evil that has been infiltrating through our and other societies for many years.

Our precious freedoms and our way of life envied throughout the world have been attained only through great sacrifice and the wisdom of those who came before us.

Today, also, we share the sorrow of the mothers and fathers and families and friends of those who never returned from the field of battle. They have suffered the greatest human tragedy – the loss of sons and daughters, spouses and brothers and sisters.

America has always been a beacon of hope for freedom for oppressed and threatened people of the world over. We have used our military might to enable other people, as well as our own, to enjoy life, liberty and the pursuit of happiness. And it has been our veterans throughout history who have been the key players in making the world a safer and better place to live.

We must give special thanks to those veterans who bear the scars of combat, many of whom are disabled and in need of constant medical care. Our hospitals are full of veterans suffering from illnesses and injuries incurred during combat or from the rigors of military service, afflictions that prevent them from living pain free lives enjoyed by most Americans.

So, today we express our honor to those men and women who have followed in the footsteps of our forefathers starting with the colonists and 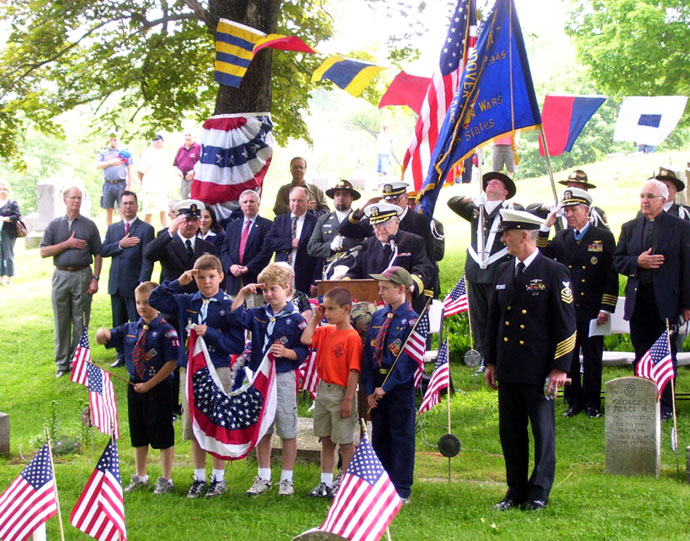 the minutemen. They were, and are today, those who were willing to fight as necessary to perpetuate the way of life passed down to them by warriors of earlier generations. They know there is no glory in war; it can be utter hell. But, thanks to them, we are living here in peace.

In closing, let is be reminded of President Abraham Lincoln’s words in 1863 at the cemetery by the battlefield of Gettysburg, and I quote;

“The world will little note nor long remember what we say here, but it can never forget what they did here. It is for us the living rather to be dedicated here to the unfinished work which, they who fought here have thus far so nobly advanced. It is rather for us – that from these honored dead we take increased devotion to that cause for which they have the last full measure of devotion – that we here highly resolve that these dead shot have died in vain….”

With Americans fighting in the cause of freedom in a land almost half a world away, think of how applicable Lincoln’s words are today. Although he spoke of he dead, his words apply equally to those men and women in uniform who are devoted to the cause of freedom and peace.

We are blessed to be Americans. Let us not, in the selfishness of forgetfulness betray those we honor this morning. Our legacy from them, obtained at the cost of the blood of millions, is priceless.