By ValleyPatriot on May 24, 2015Comments Off on HEROES IN OUR MIDST – Lawrence Cogswell, Valley Patriot of the Month Pt. 1

When I recently learned that the local chapter of the EAA (Experimental Aircraft Association) was bringing an original flying Boeing B-17 WWII bomber to Lawrence Airport this May 22nd to May 25th, I was reminded of an acquaintance I had formed with a friend in West Newbury: Lawrence “Larry” Cogswell. I often met Larry at the West Newbury Post Office and then sometimes join him Wednesday evenings at the bar in the Park Lunch in Newburyport. Larry, it turned out, was a most enjoyable storyteller with tales of his service in the Eighth Air Force in WWII.

He was also one of the nicest guys I have ever had the outright privilege to meet.

Having since moved from West Newbury, I tried to contact Larry about the forthcoming B-17 fly-in, but was shocked and saddened to learn that he had passed away on February 1st of this year. To me, Larry Cogswell was indeed a more than sterling example of what has come to be termed the “Greatest Generation,” and it seemed to me that I had to do something to remind people that the surviving few of these folks are indeed getting fewer every year. They really are heroes, although I doubt you would ever hear them say it, and there are, at best, an ever fewer number of them still living among us. It also seemed to me that Larry was a typical example of the young American kid who answered the call from his nation and “joined up” to fight in WWII.

Larry is gone now but let us see what we might be able to piece together of his and other’s stories from the Eighth:

Lawrence H. Cogswell was born in Easton, Maine on March 18th, 1924. He attended school there and then, at Fort Devens, MA, on December 16, 1943 he enlisted in the U.S. Army Air Force “…for the duration of the war plus 6 months” and in the inscrutable manner of armies everywhere he was trained to become an air gunner.

Some of the guys went to various aircraft of the period (B-17’s, B-24’s, B-25’s etc.). As fate would have it, Larry was assigned to B-17’s and the growing Eighth Air Force. I do not know for certain, but I would guess that he was probably excited about being posted to the 8th AF (which even at that time probably meant England). But I also suspect that most of those young guys did not fully realize what they were getting into since one of the most prevalent signs of youth is their given belief in their own immortality. I suspect that as increasing numbers of new, unknown faces replaced older, known faces in the briefing rooms and familiar aircraft no longer appeared on the hardstands … that sense of immortality began to slowly fade for most of those young air crews.

In those increasingly distant days most young “airmen” still believed that the B-17 was the king of bombers and undoubtedly deserved its nickname: the “Flying Fortress.” They also believed that the newly minted “Norden” bombsight could place its bombs in a “pickle barrel” from 20,000 ft., or so it was said. Unfortunately the reality was to prove enlightening and hitting that pickle barrel would prove to be a great deal more demanding, difficult, and hazardous than anyone had then imagined.

I had dimly realized this myself, because around early 1944, my mother and I were returning from Pittsfield, MA where my father was working as a welder/steamfitter (and thus an “essential war worker” – so essential in fact that we had a valued “C” sticker for gasoline, and maybe some tires, on the corner of the windshield of our old DeSoto coupe.) 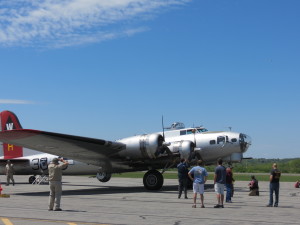 My mother and I were probably on the old Boston and Albany Railroad when we made a stop near Springfield to take on a horde of young crewmen from nearby Westover Airfield. They were, to say the least, spirited and were a genuinely rowdy bunch, but I have in the ensuing years often wondered how much of that rowdy spirit was in fact a mask to cover their own deeper, quieter, concerns. They were polite enough toward my mother and I, but I remember being more than chagrined that they filled virtually every space and every seat on that long slow train.

But to a very young kid there was worse to come: I had just received as a gift a truly appreciated new toy: a wooden toy bomber with a red body and blue wings that had a hole drilled through the body lengthwise. At the forward end of the hole there was a small mirror mounted at an angle, so that when you looked into the hole at the tail you could see your feet. Of course it was a pathetic thing by today’s standards, but remember that in those days what brought the war home to most adults was the advent of ration cards and family members going off to war while to children the reality was that most toys had changed from cast metal to carved wood or paper. At the front of my little bomber there was a slotted handle which when pulled, would drop two small wooden dowels as “bombs.” Now you should remember that all those young men on that train with us were actual bomber crews mostly on their way to Europe.
And then they discovered my “bomber.”

Now by the time we arrived at South Station in Boston only the good Lord Himself knows just how many paper cups had been “bombed” and destroyed and how many dollars in wagers had been exchanged, but I can say that somehow, someone remembered just whose toy it was and I eventually did get my “bomber” back. But I was indeed chagrined… and then some. Those trains at that time moved slowly and they had commandeered my “bomber” for hours.

At the time I neither realized nor appreciated what I had experienced… but in the ensuing years I have often wondered just how many of those so very young guys ever made it back home.

The 8th Air Force in England and the 15th Air Force in Italy (combined) lost around 3,200 B-17’s and about another 2,500 so badly damaged that they had to be scrapped.

That figure translates to 24,288 aircrew killed in action.

But to a kid of about 7 or 8 years old… even then… They were all heroes.