Some people were clearly offended and outraged by the headline, “Brooks Marries Same Sex Kids.”

It was a controversial story for sure.

Even more controversial were some of the responses we received while circulating the paper. 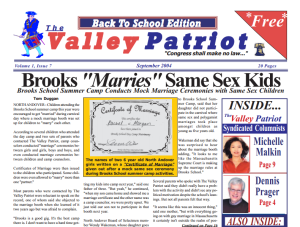 But, people weren’t outraged by the school’s behavior, nor were they shocked by the response of some of the parents. They hadn’t even read the story. They were outraged that we were circulating a newspaper with “such an offensive headline.”

One woman commented that she didn’t want to “read that anti-gay trash” after first taking a newspaper, scanning the headline, and giving it back to me in disgust. I asked her if she had read the Boston Globe that day. She had, of course, and said she found nothing offensive about the photo of bloody, dead children being taken out of a Russian school.

This fascinated me even more.

I guess when it comes to some issues (gay marriage obviously being one of them), some people just don’t want to be informed about what is happening in their community. They would rather have knee jerk reactions, after all, it’s easier than thinking for yourself.

Of course, anyone who actually read the story knows that there was no slant and no opinion woven into it.

We neither criticized nor applauded Brooks for what occurred. We reported objectively on the school’s activity and printed only the opinions of those we interviewed.

It was just a news story.

In fact, The Valley Patriot, because of the diversity of opinions among our board members, has never taken a stand one way or the other concerning gay marriage or any other so-called gay issues.

No matter, the headline alone made some people completely mental (we suspect they were slightly mental before reading the headline). They jumped to conclusions and overreacted, forcefully and angrily. One was so ignorant and angry that they were prompted by our headline to contact a Valley Patriot distributor, demanding that our “anti-gay” paper be taken out of their store.

So much for free speech and tolerance, I guess. And when the Tribune stole our story two weeks later with no attribution to The Valley Patriot, I wonder if those people tried to have the Trib’s distributors pull their newspaper from their stores?

Should we have refused to report on a summer camp conducting same sex marriage ceremonies with young children?

When someone in the community does something which people may find offensive, should we sweep it under the rug because the facts of the event might offend people?

To me, that just isn’t what a legitimate newspaper should be about.

We have one mission and one mission only when it comes to news at The Valley Patriot: to write and publish legitimate stories, present all sides (if there is more than one) and publish a clear and accurate picture of the event we are focusing on.

As opinion pieces go, we make very clear on page three (under the headline “Our Voice is Your Voice”) that we accept opinion columns from anyone in the community regardless of the topic and without the filtered agenda employed by most editorial boards. We have published pieces by liberals and conservatives, leftists and libertarians, and even one piece from an anti-Semite who blames the Jews for all the evil in the world.

If any of these angry, closed minded reactionaries who called us “anti-gay” bothered to thumb through the paper and (GASP!) actually read it, they would have seen that for themselves.

I guess it’s true that there’s always going to be a segment of society which is ignorant by choice. These people do not want to be informed and loathe being challenged by facts, news or opinions which might ruin their myopic view of the world.

The good news is that last month was our most successful edition to date. Most of the people who responded to the content (those who bothered to read more than the headlines) were thrilled that we were “bold” in our reporting and “fair” in our presentation of opinions quoted in the piece.

In the future, however, we are considering a disclaimer at the top of page one which says “The Valley Patriot … Beware: Some content may reveal truths disturbing to morons”.