By ValleyPatriot on August 27, 2017Comments Off on Jerry Lee Lewis II – IN THE GROOVE WITH CINDY ANNIS 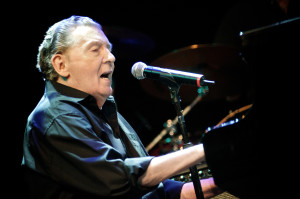 Hi folks, thanks for joining me for the rest of the great, Jerry Lee Lewis. So, we last talked about the Million Dollar Quartet. At that time, Jerry was just a studio musician, but he was well known for his performances at local bars and other small-time performances.

In 1957 things started happening in a big way. “Whole Lotta Shakin’ Goin’ On,” and my Dad’s favorite, “Great Balls Of Fire” were two of Jerry’s biggest hits. A lot of people didn’t like his style, or some of the lyrics, but these two songs brought him international fame. He was sometimes billed as “Jerry Lee Lewis and his Pumping Piano!” Imagine, people said these songs had undertones of sexuality so bad that some radio stations wouldn’t even play them. “Whole Lotta Shakin” Goin’ On” went on to be put into the Library of Congress as one of the songs so great it should be preserved for all time! This happened in 2005.

One of Jerry’s good friends was Johnny Cash. It is said that Jerry told Cash that his music was getting in the way of his religious convictions. He thought his music was sinful and it was, “…leading him and his audiences straight to hell.” He thought the lyrics might be a little rough, but his performances were what troubled him. He was a “wild man” on stage. Doing things like pounding the keyboard with his fists and playing the piano with his shoes and his butt! He even, occasionally stood on top of the piano and used both feet to make his music. He accidentally knocked the piano bench over in one of his shows, but it added to the frenzy of the crowd, so he left it in the act and used it to turn on the crowd!

These kinds of performances troubled Jerry, but he was giving the crowd what they wanted. This didn’t help his personal life. By 1958, Jerry had already been married three times. All this background life stuff was hidden from you and me until his third wife. He married Myra Gale Brown. She was his 3rd cousin once removed. The fact that she was his cousin wasn’t even the big problem. The fact that she was only 13 years old is what did him in! He, she, and his publicity people tried to sell her as being 15. Would that have really mattered?

He was 22 years old. The negativity was enormous. He had to cancel his tour after only three concerts. All of this news broke while on tour in London.
He came back home after the tour cancellations. And all that news followed, right behind him. Radio stations were the first to respond to his marriage. They stopped playing his songs all across the states. Then his “people” started leaving him. Even his record label stopped working with him. He definitely learned who his real friends were. Jerry lost just about everyone, but, Alan Freed stuck by him. Rock & Roll, Alan Freed continued playing and promoting Jerry during these dark times.

Jerry all but disappeared from the world for a while. He continued to record with Sun Records because of his contract and released a few good songs. Sam Phillips, the big boss at Sun Records, opened up a couple of modern day facilities, one in Memphis, and the other in Nashville. The studio in Nashville was where Jerry went back to work. He did a cover of Ray Charles’ “What’d I Say,” in 1961. It did alright, and over in the UK he was having some good feedback on “Sweet Little Sixteen,” in 1962, and “Good Golly Miss Molly,” in 1963. Back here in the states, though, he was still on the slide. He did a boogie version of “In The Mood,” under the name, “The Hawk”. As soon as the radio DJ’s realized who the Hawk was, they pulled the record.

Jerry Lee Lewis left Sun Records in 1963, and signed up with Smash Record. They were a subsidiary of Mercury Records. He did some recording there, but nothing that would bring his career back to what it was. Smash came up with a song for Jerry to record. “I’m On Fire” sounded just like the kind of song to revive his career, and he might have hit it big except for one thing. The Beatles and the British Invasion moved into town.

Jerry did have a success or two during these dark times. One of those was a recording called, “Live At The Star Club, Hamburg.” Produced by Siggi Loch, it proved to be a huge success for Jerry. Rolling Stones Magazine called it” …a crime scene as Jerry slaughters his rivals in a thirteen-song set.” It was rivaled by nothing of its day. All this attention was in Europe, because his contracts said it couldn’t be released here in the states.

Jerry was soon to be released contractually from Smash Records when he got a call from Eddie Kilroy. He was a promotions manager. He suggested Jerry try the Country Music Circuit. He said, “why not.” So, Jerry recorded the old Jerry Chestnut song, “Another Place Another Time,” and it flew up the country charts in March of 1968. Other producers and many country hits later, he was invited to play the Grand Ole Opry. Of course, the memories of when he was a teenager and he tried the Nashville group, he was turned down and basically told where to go with his lawless music. But Jerry was magnanimous and he played the stage. Usually the play time was about 18 minutes, but Jerry did a solid 40 minutes up there and he went through all his old stuff with a frantic frenzy that he hadn’t felt for many years. He had a blast!!

He was back on top, but a top of where he never thought he’d be.

My boss just told me I had to wrap this thing up. Jerry did a ton of country stuff and he played and still plays all his old stuff the way he likes to do it! His music is used in movies and on stage.

“Great Balls Of Fire” was all about Jerry and he was able to re-record all his music for the film. He was where a star likes to be. He won all the awards a Rock & Roller can win. He won Grammys; he has a star on the Hollywood Walk of Fame. He is in the Rock & Roll Hall of Fame in 1986, and the list goes on.

There really is so much more to say about “The Killer,” but there isn’t enough room in this here column. I hope you enjoyed this one as much as I enjoyed writing it. See you next time, right here at “In The Groove With Cindy Annis!”