By ValleyPatriot on June 3, 2022Comments Off on KANE’S CORNER ~ Geoff Diehl, a Strong Voice for Constitutional Rights, Dog Welfare, and Veteran Employment 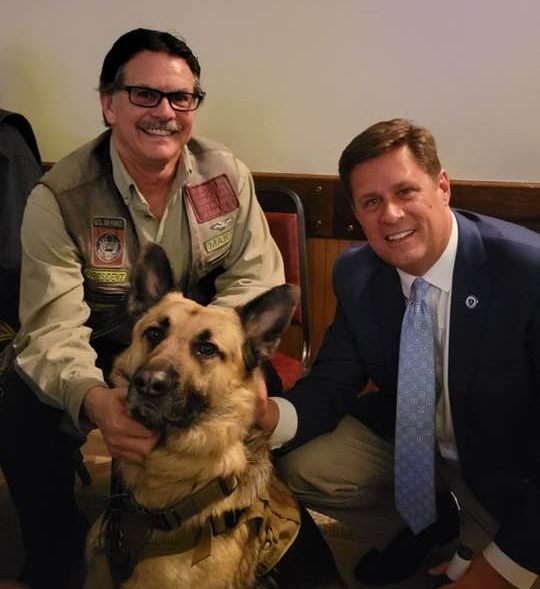 Kane and Candidate for Governor Geoff Diehl have attended many of the same Veteran events over the past few years, so Kane was very excited to run into Geoff Diehl at the Valley Patriot Scholarship and Award Banquet. Kane was surprised Geoff Diehl could see him at the corner table, where his humans said he would be safely away from the guest’s Chicken Parmesan, but Geoff found him, since he is known for seeking out dogs in a crowd. (Check out #DogsforDiehl). Besides giving the best neck scratches, Kane knows that Geoff Diehl is a strong supporter and advocate for legislation that supports the humane treatment of dogs and recent legislation to support emergency care of working dogs hurt in the line of duty.

One example of this legislation includes the Animal Cruelty Case, Puppy Doe in 2014. Ultimately the successful resolution of this case, also named the Paws Protection Act, increased the penalty for abuse of animals and the length of jail time.

Kane takes a particular interest in this type of work because he came from an animal neglect situation and his sister Ruby was saved by the local authorities from neglect and starvation. In fact, Geoff Diehl had a canine family member named Chloe for 16 years. She was a Lab Shepherd mix rescued from the New York City MSPCA. Geoff truly understands how important dogs are and just recently felt ready to add Lucy, a new pup to his family, who often hits the campaign trail with him.

Geoff Diehl stated, “Massachusetts Legislation is proactive in helping animals, the legislation often recognizes them as the true companions that they are.” Diehl is a strong supporter in legislation to keep our police officers and k9 officers safe in the line of duty.

He sees the importance of having adequate resources, support, and training to keep up with a forever changing environment. The tragic death of Officer Gagnon showcased the dangerous nature of the job and need for K-9 Officers like Nero to be treated at the scene when injured in the line of duty. Nero’s Law was treated with a level of urgency in the protection of law enforcement and K9 safety.

Kane was also excited to discuss Geoff Diehl’s ideas on veterans’ services. Many of Kane’s friends are veterans and are known for both their work ethic and training they acquired in the military. As Governor, Geoff Diehl will work to waive licensing requirements to establish a career immediately upon integration back into civilian life. Geoff discussed how many returning veterans from Iraq and Afghanistan had to spend endless hours being certified again by the state licensing board for careers they were already trained for and actively working in during military service.

Examples are people in both the construction and medical field. A path that recognizes the talents and skills veterans bring to the table for immediate use is important to both the veteran and employer. Geoff Diehl feels the current licensing board rules block the returning veterans from immediately using their talents.

Lastly, we discussed the recent firing of state employees for not adhering to the vaccination mandate. Geoff Diehl clearly stated that during his first day in office he would hire these state employees back to their respected careers. Diehl said, “we are losing a talented pool of people.” He feels strongly that decisions about medical care are individual choices that each person has a right to make for themself. Diehl discussed how many of the first responders, nurses, firefighters, and police officers could have natural immunity from the virus, which was not taken into consideration. However, the importance of allowing citizens to make personal decisions in regard to their health is of upmost important.

Kane would like you to reach out to Geoff Diehl with questions you may have. Don’t be shy, he is easy to talk to. He was even willing to share his chicken parmesan, but don’t tell anyone.