By Mark Behan on May 16, 2013Comments Off on Knights capture Region XXI, advance to World Series 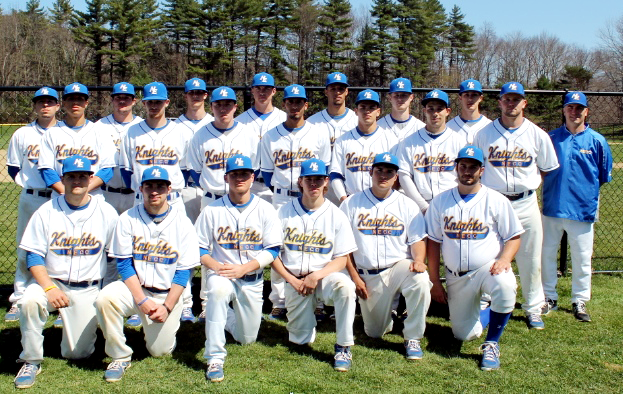 This was supposed to be a rebuilding year for the Northern Essex Community College baseball team.

After all, the Knights were coming off a magic carpet ride of a season in which they sported a 30-10 record, won the Region XXI championship, and advanced to the Junior College World Series, where they finished third in the nation.

As for returning players, well, um, there weren’t many.  Seven of nine players graduated, and an eighth transferred to a four-year college.  Oh well, not even The Babe and the Yankees appeared in the World Series every year.

And so the 2013 campaign, with its fresh new car kind of smell, began in late March with a week’s worth of games in Florida.

“It has been a year of change from players, positions, and coaching staff, but the one thing that remains the same is the pride and winning tradition of Northern Essex Community College baseball,” said Sue McAvoy, the school’s athletic director.

Back in 1977  Methuen’s own Steve Bedrosian pitched for the Northern Essex baseball team.  For those too young to remember the big Methuen High graduate, let me educate you:  Bedrosian pitched 14 seasons in Major League Baseball, the majority of those with the Atlanta Braves.  The 6-3, 200-pound righty won 76 games in his career.  But he is most widely known for two reasons. First, he earned the 1987 Cy Young Award with 40 saves for the Philadelphia Phillies – one of only four relief pitchers to ever cop the award.  Second, he had a cool nickname: “Bedrock.”

“Bedrock” is the last Knight to don a Major League uniform, but the program has prospered since he made it to the Big Show.  Entering this season, the Kids from the College on the Kenoza have won two regional championships and finished as runner-up three times.  They have also been crowned victor in six Massachusetts Community College Athletic Conference finals.

In the season-opening trip to Florida, the Knights met formidable foes such as Montgomery College of Maryland.  The Raptors rapped the Knights by a football-like score of 29-8, and the Knights lost more than they won during their week in the Sunshine State.  But it didn’t matter.  They could have been getting beaten by the Bad News Bears.

“It (the trip) wasn’t about our record; it was a really good experience for the team as the kids’ roles on the team became more defined,” said Head Coach Jeff Mejia.  “We really bonded well on the trip to Florida.”

In April, Zachary Beckwith channeled his inner Steve Bedrosian.  At 6-feet, 4-inches, Beckwith is an inch taller than “Bedrock” with a golden right arm.  He finished the regular season with a 6-1 record, including a 5-0 shutout of Quinsigamond Community   College.  He posted a 2.83 ERA and had 40 strikeouts – both team bests – and was named the NJCAA Division III pitcher of the week for the week of April 14 and first team All-Region.

But after Beckwith’s gem, the Knights lost four of their next five games and were mired below .500 at 9-11.  Their postseason hopes appeared dim.

On April 21 the Knights split a doubleheader with Massasoit Community College.  They dropped the first game 9-4, won the second one by the identical score, and faced gut-check time.

Facing Mass Bay in the first game of a doubleheader, Beckwith struck out six in a 12-0 shutout victory.  The Knights’ bats, led by Tyler Johnson, remained hot in the second game, an 11-1 win, as Northern Essex advanced to the Region XXI playoffs for the third straight year.

“The team had its share of bumps in the road since last fall,” McAvoy said, “but by working hard and learning how to pull together and to support one another, this team is definitely peaking at the right time.”

In the first round of the tourney against Bunker Hill, the Knights trailed until Haverhill’s Jonathan DeLaCruz ignited a sixth-inning rally with a home run. “That was the turning point (DeLaCruz’s home run) of the game,” said Mejia.  Johnson knocked in the winning run with a sacrifice fly, while pitchers Josh Cummiskey and reliever Chris Martin combined for the 6-5 victory.

In Game 2, the Knights faced one of those bumps in the road that McAvoy had mentioned.  They trailed Massasoit 9-0 after four innings and saw their coveted spot in the NJCAA Division Championships in jeopardy.  But the Knights clawed back, thanks to Martin and Dario Medrano, who smacked fifth- and sixth-inning home runs, respectively, and reliever Cameron Berube, who pitched four innings of one-hit ball to cement the 12-11 victory.

After a pair of one-run, come-from-behind wins, the Knights celebrated like it was the Fourth of July in Game 3 against Massasoit.  They clubbed 18 hits. They plated 17 runs. Trevor Bouvier belted two home runs, including a grand slam, and knocked in seven runs. Martin pitched eight innings and didn’t allow an earned run.

“We had high expectations,” said Mejia, who as a proud member of the United States Army served in Operation Desert Storm. “Our goal was to win Region XXI.”

They accomplished it, punching their ticket to the Junior College World Series in Tyler, Texas in late May.  And that’s not such a bad way to end a rebuilding year.