By Mark Behan on June 6, 2013Comments Off on Knights ousted in College World Series

“Our goal was to compete well in the Region (XXI) tournament, and then see how far we could go,” said first-year Head Coach Jeff Mejia. “The kids really stepped it up.”

As did the coach and his staff. 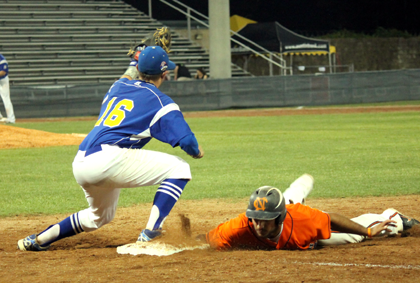 Hired late last fall, Mejia was a seven-year assistant at Suffolk University. He was also a member of the United States Army and served in Operation Desert Storm. While at Suffolk, Mejia, a North Reading resident, shepherded the Rams to a Great Northeast Athletic Conference championship and a berth in the NCAA Division-III regional tournament.

Mejia inherited a Northern Essex team that lacked experience. Only one starter returned from the 2012 squad, which sported a 30-10 record, won the Region XXI championship, and advanced to the Junior College World Series, where they finished third in the nation.

But after a 2-6 start and a 9-11 record through 20 games, Northern Essex started playing its best baseball of the season, said Athletic Director Sue McAvoy, and advanced to the Region XXI playoffs for the third straight year. 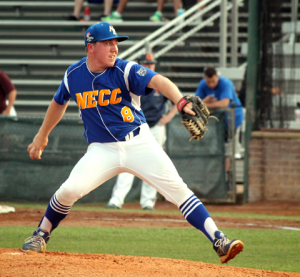 The Knights were the Comeback Kids of Region XXI. In Game 1, they trailed Bunker Hill before Jonathan DeLaCruz swatted a home run to spearhead a sixth-inning rally, which led to a 6-5 win.

In Game 2, the Knights were down 9-0 to Massasoit after four innings, and their hopes of advancing to the World Series were fading. But Chris Martin and Dario Medrano belted home runs, reliever Cameron Berube tossed four innings of one-hit ball, and the Knights marched back for a 12-11 victory.

“We wanted to win Region XXI,” said Mejia, whose team captured the championship game 17-2 over Massasoit for its third regional crown in program history.

At the World Series in Texas, the Knights were “treated like big leaguers,” said Mejia.

“It was an unbelievable trip,” said Mejia, whose squad conducted a clinic for local Little League teams while in Texas.

The Knights entered Game 1 against Nassau Community College with hot bats, led by first-team All-Region selection Chris Andella, who was hitting .410., and with Josh Cummiskey on the mound.

Cummiskey was economical during his 109-pitch performance. He fanned three, allowed six hits, and did not yield an earned run in eight innings.

“Josh was excellent,” said Mejia. “It was probably one of the best games played in the whole tournament.”

Facing elimination in Game 2, Northern Essex started its ace Zachary Beckwith. But the tall righty had been battling back injuries since the Region XXI tournament.

“With this injury, I was not sure how I would do. But I wanted to know that I gave my team – and my sophomores – my 100 percent effort on the field,” said Beckwith, who lasted an inning. “At the end of the day, I know I did it.” 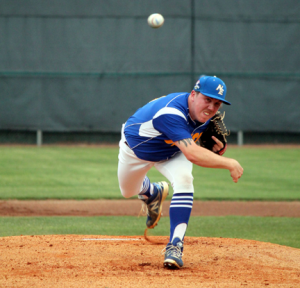 Brookhaven led 4-0 before reliever Derek Dolan entered the game. Dolan surrendered only one run in five innings. Dario Medrano scored twice for the Knights, and they trailed 4-2 in the seventh inning.

But Northern Essex could not reach Brookhaven’s starter, who allowed one earned run, and the Texans prevailed, 9-2, to end the 2013 season in the double-elimination tournament.

“It was a close game through seven (innings),” Mejia said. “Brookhaven was very good.”

And so were the Knights, who made back-to-back trips to the NJCAA World Series – a first in program history. Alex Mears, Chris Martin, David Cusack, Derek Dolan, Tyler Johnson and Nick Goodin represented Northern Essex in both its appearances.

“It was my dream to play in a college world series,” said Mears, “and I’ve been blessed to play in two of them.”