By Tom Duggan on September 17, 2015Comments Off on Labor Union to Bankroll Recall Efforts to Remove Lawrence Mayor, Calls Rivera “Sexist”, “Racist” and an “Oreo Cookie” 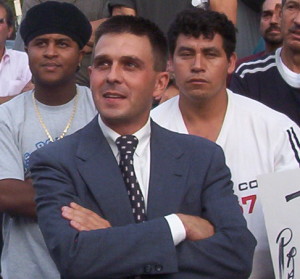 The president of a local union has come forward saying he and his organization are going to bankroll the recall petition against Lawrence Mayor Dan Rivera to have Rivera removed from office. A recall effort is underway in the city by undertaker Louis Farrah and his group

Mike Gagliardi, head of Laborers Union Local 175 in Methuen, told The Valley Patriot in an exclusive interview Thursday, that he and the 1,000 members of his union are “supporting the removal of Mayor Dan Rivera 100%.”

Gagliardi appeared on a local Spanish language radio program Wednesday, saying Rivera was a “racist against Dominicans” and called him “an Oreo cookie”.

“What we do know is that a judge issued a ruling from the bench on Tuesday declaring that any and all petitions dated 9-15-15 are null and void. She wants to maintain status quo and said that no further action on the recall should take place until such time as she has had a chance to rule.”

Asked what ruling they were waiting for, Tabit said that they requested the Board of Registrars hold a hearing on Mayor Rivera’s claims that some of the signatures obtained on the recall affidavit were invalid. “The BOR says we are not entitled to a hearing I think we need to wait and see what a judge says.”

Tabit is no stranger to recall efforts in Lawrence. He represented Willie Lantigua in the recount and recall efforts against him. Tabit says he is flattered that Mayor Rivera hired him despite being on the other side in previous elections.

“They are going to do everything they can, and use every legal maneuver to deny the people of Lawrence their right to vote on this recall” Gagliardi said.  “We are not going to let him get away with denying Latinos the right to vote.”

“It appears that Danny has scared a lot of people in Lawrence by putting more police into their neighborhoods,” he added, “which is clearly a scare tactic in the Latino community. Now he is trying to scare the recall supporters with court action. In addition, he stated that it’s only a few disgruntled employees who want to recall him.  We represent 1,000 working families in the Merrimack Valley, 60% of our members come from Lawrence, and 65% are Latino. Our coming out for the removal of Dan Rivera shows that working families in Lawrence support this recall, not just disgruntled workers.”

Gagliardi says that his union is now financing an office for recall supporters to organize against Rivera, adding that his union members will pay for printed materials, as well as “having all our union members on the streets, going door to door to collect signatures.” Gagliardi says the office will cost about $900 a month and estimated he will be spending about $10,000 in total to support the removal of Rivera as mayor of Lawrence.

Gagliard also said his union would be mounting a “vigorous publicity campaign” against Rivera as well.

“We are taking out ads on Spanish radio so people know where they can go to sign the recall petitions. We are also going to buy ads in The Valley Patriot because we know their readers are the people who vote, and we initially planned on doing a big radio ad buy on 980WCAP until they hired that sicko Bob Leblanc and then threw Tommy Duggan off the air. That ad money will now go to internet ads on local news sites, make no mistake, this is going to be a monumental union effort to remove Dan Rivera from office and money is no obstacle.”

Asked how he justified saying Rivera had attacked “working families” and why he calls Mayor Rivera a “racist” and an “Oreo cookie”, Gagliardi said Rivera is outsourcing jobs at the expense of Lawrence residents, most of whom are Dominican.

“Dan Rivera left working families in the gutter when he refused to negotiate contracts, and refused to enforce the 40% residency requirement, which is a city ordinance.” The City’s “40% rule” mandates that any construction projects done in the city with public dollars must hire 30% of their workers from Lawrence. Rivera refuses to enforce that ordinance leaving Dominican families with no food for their children.”

“Many other cities such as Boston, enforces a 50% residency requirement and we can’t even get this guy to give 30% of the construction jobs to Lawrence families. Danny Rivera instead, decided to oppress the Latino workers and allow out of sate contractors and out of state workers to come in and take their jobs.”

“His actions show his racism towards Dominicans. So, yes, I refer to him as an Oreo cookie because, during election Danny Rivera said that he was going to give Latino children hope, an education, and help them economically to lift them up. But, all he has done is spend all his time in Boston and Washington DC with his rich, white, friends. As mayor of one of the most impoverished cities in the country he should be in this city every single day helping poor Latinos get ahead. Instead Danny Rivera is running to Andover with his white, rich, Republican friends at the Lanam club, of which he is now a member. When was the last time you saw Danny in a Lawrence club? In Latino neighborhoods?”

CHARGES of SEXISM, “THIS IS NOT ABOUT LANTIGUA”

Gagliardi, who supported Mayor Lantigua, (and who steered thousand of dollars in union donations to Lantigua’s campaign against Rivera in 2013) said that the recall is not about Lantigua or his support for the former mayor but, Rivera’s refusal to support the Dominicans in Lawrence, adding the charge of sexism to his long list of complaints against Mayor Rivera.

“He can say this is about Lantigua, Lantigua’s not even in the country. Danny has to say that because he has nothing else to say. He’s trying to hide from his record. All we expected from Rivera was for working families to be given a decent chance. But, he’s not only racist against Latinos, he’s a sexist too.”

“He refused to endorse even one woman in the last Democratic primary. He had a chance to support Diana DiZoglio, a woman who speaks fluent Spanish, and originally from Lawrence. Instead he decided to endorse the rich, white, guy from North Andover. As we see in the results of last election, women won the majority of the positions and Dan was opposed to all of them. He didn’t support Diana, he refused to support Barbara L’Iitalien, Suzanne Bump, he even supported that do-nothing Barry Finegold over someone as imminently qualified as Deb Goldberg for State Treasurer. Worst of all, he stood with the whitest white man in Massachusetts, Warren Tolman over Maura Healey for Attorney General. I think it’ pretty clear what Rivera’s prejudices are and the people of Lawrence deserve the right to vote on a recall now that we have seen his disgraceful performance in the last year and a half.”

MAYOR GETS TRO TO HALT RECALL