By Tom Duggan on January 16, 2014Comments Off on Lawrence: Chief Fitzpatrick and Mayor Rivera Announce the Establishment of a “Robbery Reduction Initiative” 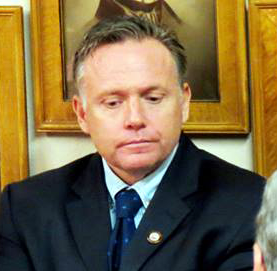 LAWRENCE – Chief Fitzpatrick and Mayor Rivera announce today the establishment of a “Robbery Reduction Initiative”. This is an effort to combat the recent spike of armed robberies in our city. After multiple meetings with the mayor and the Lawrence Police Command staff a strategy to address the recent spike was put together. Robbery Reduction Initiative:

• The introduction of a Police task force into hot spots

• The utilization of “park and walks” in targeted areas with the goal of increasing direct police officer to citizenry interaction.

• Establishment of a Hotline: 978-794-5900 X643 to report information regarding these ongoing robberies, possession of illegal firearms

• The utilization of School Resource Officers to educate students on crime prevention strategies.

• The use of the newly established “neighborhood liaison” to walk door to door, along with the Mayor himself, to provide residents and business owners with up to date crime data and strategies to avoid becoming a victim.

Robbery is a violent crime of serious concern to the Lawrence Police Department. What we know about the recent spike:

• A majority of them were cell phone thefts

• Majority are occurring in one specific area

Lawrence: Chief Fitzpatrick and Mayor Rivera Announce the Establishment of a “Robbery Reduction Initiative” added by Tom Duggan on January 16, 2014
View all posts by Tom Duggan →