It was the usual circus at last nights meeting of the Lawrence City Council’s Housing Committee as Councilor Nilka Alvarez, (who is supposed to chair the meeting), completely lost control, allowing the meeting to degenerate into name calling, accusations of racism, a spate of misinformation, and a constant stream of personal attacks on David Hartlieb (president of Northern Essex Community college) and Mayor Sullivan.

The decaying structure currently houses FIVE businesses which pay far below market value for rent, and one non profit (run by Isabel Melendez) which pays NO rent to the city at all. The structure also has rats, a leaking roof and asbestos.

Northern Essex Community College plans to tear down the existing building to construct a multi-million dollar health and technology center, complete with parking.

Mayor Sullivan chose the Northern Essex plan for the building over local businessman Benny Espaillat (who lives in ANDOVER) who wanted to leave the structure in place. Unfortunately for Mayor Sullivan and Northern Essex Community College, the proposal has to be approved by the amateur, part time city council.

Opposing the NECC plan for a multi million dollar health and technology center were, of course, 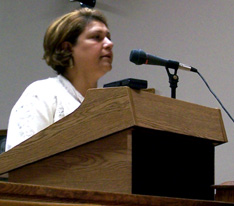 City Councilor Nilka Alvarez began the meeting saying that “because of the number of people who want to speak on the issue,” she was going to limit each member of the public to “two minutes”. But Alvarez, who never really had control of the meeting, allowed the first speaker to go on for more than six minutes, the second speaker for eight and when former City Councilor Julia Silverio took the microphone, Alvarez allowed her to make accusations of racism against mayor Sullivan as well as the faculty and president of Northern Essex Community College for more than 22 minutes.

Speaker after speaker took the microphone to attack and insult NECC president David Hartlieb, Mayor Sullivan and the faculty of the college. Former councilor Julia Silverio, well known for her racist views on city government, questioned Hartlieb’s integrity saying that the college did not benefit “Latinos” and that the only “Latinos” who worked at the college were janitors.

Council President Patrick Blanchette complained about the amount of time being wasted on speakers who were obviously goingover the never imposed time limit. We’ve gone from six minutes, to eight minutes to twenty two,” Blanchette complained. The council president, who is only a regular member of the sub committee obviously frustrated said he would not vote to table (delay) a vote on the college

When Lawrence Planning Director Michael Sweeney asked for “three minutes” to rebut some of the wild claims made by Silverio, Nazario Esquea, and the rest of the mob, she agreed. But a minute and a half into his rebuttal Alvarez laughingly cut him off saying “can we move this along”. Sweeney refused saying he had only asked for three minutes and wanted to rebut the misinformation given by supporters of Benny Espaillat.

Councilor Nick Kolofoles, trying to pander to the “Latino” mob, asked Sweeney for a master plan for Essex Street within the next week. “With all due respect,” Sweeney asked, “do you have any idea what you are asking me for? It’s just completely impossible.”

Kolofoles seemed dazed and confused throughout the meeting, asking questions that had already been answered several times. He obvoiusly had no idea what a master plan is and how long it takes to put one togeter. 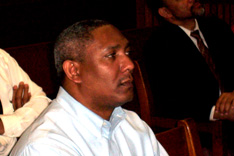 Spanish language talk hosts like Nazario Esquea, Milagros Dominguez (Dirma Espada) and Santiago Mattias had been whipping up racial hatred for weeks over the issue, telling their radio audience that Mayor Sullivan was a racist and that, because Benny Espaillat was “Latino” he should be “given” the building to “do what he wants.”

The circus lasted for more than five hours and in the end, councilors tried to kill the Northern Essex proposal by voting to “table” (delay) a vote on the issue for two weeks.

“Is it any wonder why professionals from outside the city of Lawrence do not want to come and do business here?” asked planning director Michael Sweeney after the meeting. “Can you just imagine being the president of a college, coming to Lawrence to propose an $20 million project and having to listen to this for five hours?”