By Tom Duggan on December 16, 2013Comments Off on Lawrence City Councilor on Ride-Alongs with Police, Fire and DPW – PART I

Last week Lawrence City Councilor Mark Laplante went on a “ride along” with the Lawrence police, fire, and DPW snow plows to get a better understanding about how city services are delivered to Lawrence residents.

In Part Two we will explore what he learned while riding with the Fire Department and DPW.

This was not the first time Laplante has gone along with city workers to observe how they do their jobs and what is happening on the city streets. Two summers ago The Valley Patriot caught Laplante riding alone with Lawrence police, running into him at gun and drug calls, domestic violence incidents and motor vehicle accidents. (see photo)

“Obviously, one of the most important functions of city government is public safety,” Laplante said.

“Having an opportunity to see first hand what they [city workers] do, gives me better insights into the decisions that are being made and what they do day to day. I think it helps me become a better decision maker at the council level when I need to take a vote on the budgets or policies in these departments.”

“The first thing I did was spend some time at the 911 call center at the Lawrence Police Department,” Laplante says.

“It was interesting because I get complaints from time to time about rudeness, call takers being short with people or lack of professionalism by 911 call takers. So, I wanted to observe the conditions for myself to see what they were dealing with everyday.”

“When I was there they were very professional,” Laplante added. “It gave me a real sense of how well our citizens are served.”

Laplante said that even though it was a relatively slow night for the Lawrence Police watching the amount of work 911 call takers do every day was inspiring.”

On any given shift there are three people working 911 dispatch at the Lawrence police department. Lawrence police have one person taking calls while another person runs license plate numbers, conducts warrant checks and previous arrest records, while a police officer does the dispatching of calls to cars on the road.

“I think people need to understand that these professionals are working 8 hours with no breaks. They have to balance real high priority calls like shots fired, rapes, domestic assaults and the frustrating quality of life issue calls that come in on 911. My sense is that they were very professional and straight forward with the people they interacted with. And one thing I want to stress is that they really tried to be helpful with people, they weren’t just going through the motions doing a job.”

“One person called 911 about something that probably wasn’t a 911 emergency. For whatever reason this person seemed emotional and really vulnerable. The dispatchers took the time to talk to the person and work through their issue knowing the person was in a bad spot. You know, they don’t have to do that but, they did and things like that make all the difference in our city.”

“One thing that struck me is that people inappropriately use 911,” he continued. “While I was there calls came in to 911 from someone upset that a car was parked in front of their driveway.”

Laplante says that these kind of calls, while important, take up valuable resources from real 911 emergencies.

“We have to do a better job educating the public that you only call 911 when you have a real emergency.”

The Valley Patriot asked councilor Laplante if there were any areas where the dispatch centers could use improvement. After some hesitation, he said there was a need to change the city’s hiring policy going forward to require incoming call takers to be bilingual.

“One of the few things I saw that I think we could probably improve, is the language capabilities of the dispatchers. Not all of them speak Spanish. When we hire people going forward we should probably make fluency in English and Spanish a requirement for the job. I don’t want to take anything away from the dedicated, professional dispatchers that we have now, but I think it better serves our population to have someone who can communicate without getting assistance. That saves valuable seconds in an emergency.”

Laplante said that there is currently a system in place where dispatchers can bring in a third party translator on the phone through a service the city subscribes to.

“They can push a button and have a translator there on the line with them in seconds to help translate. The officers and dispatchers I spoke to said that the system works really well, and it probably does. My concern is that in an emergency situation seconds could mean lives and we really need to save every second we can when people are dialing 911 in the City of Lawrence.”

Laplante said calls coming into the station on other phone lines not connected to 911 cannot be translated.

RIDING ALONG WITH LAWRENCE POLICE

Laplante spent an evening riding along with Sgt. Mangan on a night that was slower than usual, something Laplante says gave him an opportunity to talk to officers and public safety officials about how they do their jobs and the challenges they face with minimal resources.

“One thing that struck me,” Councilor Laplante says, “is how they responded to the calls two or three cars at a time. On one domestic violence call there were multiple cars responding because they don’t want to be outnumbered when they walk into these situations.”

Laplante says that given how many cops Lawrence has to respond to calls in the first place, tying up three or even four police cars on one call is a nightly event.

“It’s easy to see how every car can be tied up at once if you have two or three of these calls come in at the same time or near each other.”

Laplante says even on a slow night the calls come in one after another. “These officers are hopping from call to call and it runs the gamut. One minute they are at a noise complaint or a domestic violence call and the next minute they are taking a call of ‘shots fired.’ 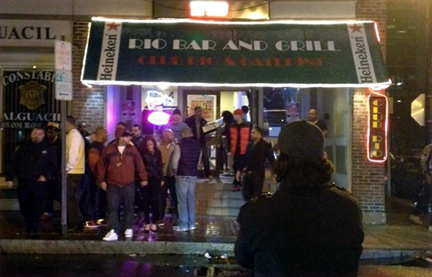 “What I witnessed on the three police ride-alongs that I’ve done so far is a department that shows tremendous professionalism despite being low on resources, manpower and equipment.

“I was there for closing [last call] of the nightclubs and I have to say what these officers deal with is a wild scene in Lawrence at end of the night. I don’t know how they do it but they do and they handle it really well. You have clubs all closing at the same time, there are many inebriated patrons filing onto the streets of Lawrence and with that comes the inevitable problems.”

Laplante said that this included parking lot fist fights, altercations in the middle of the streets, drunk driving, and was quick to point out that most of the individuals who are causing the problems “are not from Lawrence. They are from outside the city.”

“Overall I’d say it’s been very valuable to be able to see what goes on first hand. It’s critical to see what these officers face every day. I mean, you hear stories about what goes on but when you see it for yourself, you get a much better understanding of how well the police officers and dispatchers do their jobs and use that knowledge to make their lives and the lives of the people of Lawrence a little better, a little safer.”

The Valley Patriot asked Councilor Laplante if there were any areas where he thought the Lawrence police needed improvement or areas where the LPD could be doing things differently.

“Well, I will say that 99% of the Lawrence police officers I have seen are professional and doing their jobs by the book. So, I don’t want anything I say to reflect badly on the 99%, but I did see a few incidents where officers were too aggressive and provocative, maybe … had a little bit of an edge to them that didn’t seem helpful in the situations they were dealing with.”

“It’s really unfortunate when this happens because it can cast a bad light on all the good officers who are trying to calm these situations and make us a more peaceful city.”

Laplante said that he believes that there are city employees in every department who could benefit from additional training to better service the public.

“There are always people in any job who need to be reminded what their role is and how they are supposed to conduct themselves. I’m glad I got to witness that too,” he admits, though he said he had no interest in identifying the officer or cause a stir. He said that his role was to observe, not interfere, and also use his observations to increase efficiency and improve the quality of life in the city.

“I support the police officers while they are doing their jobs, but I need to also be able to understand the frustrations of my constituents when they run into an unfortunate situation with one of our employees who could be doing a better job.”

“The reason I am doing all this is to learn how things work. I want to better understand the challenges our public safety officers face every day and give them the support they need. Whether that’s finding out where they need more funding, such as for vehicles and equipment, or how we can change policies to make their lives safer such as retraining some officers.”

“I can’t stress enough how professional this department is. They are potentially dealing with life and death every time they answer a call and they handle it extremely well.”

Lawrence City Councilor on Ride-Alongs with Police, Fire and DPW – PART I added by Tom Duggan on December 16, 2013
View all posts by Tom Duggan →