By Tom Duggan on April 9, 2015Comments Off on Lawrence Mayor Reacts to Ferguson, New York, South Carolina Incidents, Orders Use of Force Review for Lawrence Police 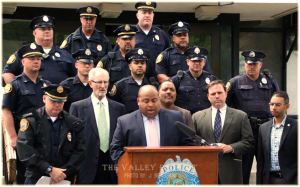 Lawrence Mayor Daniel Rivera and acting Police Chief James Fitzpatrick announced yesterday, the ongoing efforts to avoid and prevent the wrongful use of force by officers in the Lawrence Police Department. In light of the recent national incidences of wrongful use of force by police officers, and the growing national divide between law enforcement and the communities they protect, it is important to report the proactive actions of acting Chief Fitzpatrick and the Rivera Administration.

“I am troubled by the many instances where civilian lives are either taken or harmed by under-trained and rogue law enforcement officers. In a dense, diverse city like ours, with so many immigrant groups, we cannot afford a tragic incident because our law enforcement officers were not trained appropriately. I want the community at large to know that as Mayor, I will do everything in my power to ensure our officers are trained and knowledgeable in the use of force, and that our use of force policy is rooted in the basic notion that all lives matter, ” said Mayor Daniel Rivera.

Over 8 months ago, acting Chief Fitzpatrick enacted an action plan to ensure officers under his command were trained and knowledgeable on the use of force policy and modern day use of force tactics as set out by the Massachusetts Police Training Council. This included an 8 hour MPTC training course and a 2 hour in-house in-service training. The training reviewed court cases around the use of force, emphasized the proper use of deadly force as authorized by MPTC, and taught appropriate, thorough and transparent report writing.

“While the majority of our encounters with the public are peaceful, we must train our officers to effectively deal with any encounter. In our training we emphasize both restraint and de-escalation techniques which help us achieve our ultimate goals to preserve life and maintain a safe community, ” said acting Chief Fitzpatrick.

As of today, almost one hundred percent of the sworn officers have completed both trainings. The use-of-force guidelines and chart have been prominently placed throughout the police station and officers were each given reference guides for personal use.Chief Fitzpatrick and Mayor Rivera reviewed, and are in the process of updating, the Lawrence Police Department policies on use of force. The old policy was issued six years ago in March of 2009.

The new policy will include an emphasis on de-escalation, an update on allowable tactics, and added language for the administration of medical care when necessary. Once updated, the policy will be read at every roll call, given to every officer, and posted throughout the police station.This is just one step in an ongoing effort to gain the community trust.

In November of 2014 Mayor Rivera and acting Chief Fitzpatrick also announced the reorganization and streamlining of the LPD’s Professional Standards Unit (formerly known as Internal Affairs). These enhancements introduced a new anonymous, complaint and commendationprocedure for residents to use in reporting police officer conduct. It also included greater access to bilingual forms, adesignated and separate phone line, and new professional standards tracking software. Head of this initiative, Lt.Mike McCarthy, provides aggregate reports from this initiative at monthly COMPSTAT meetings.

“In short, these combined efforts by acting Chief Fitzpatrick and his leadership team, are to help us prevent unnecessary tragedy in our community, and to build the trust between our brave police officers and residents,” said Mayor Rivera.

“We will continue to adopt best practices in this area as we grow one of the finest police departments in the nation.”