By Tom Duggan on August 3, 2007Comments Off on Lawrence’s Councilor Silva Cleared in Hand-Gun Incident 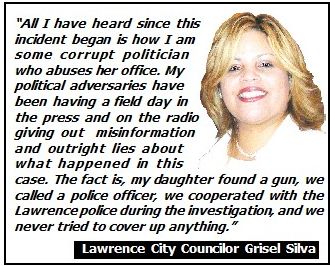 Almost exactly one year after a gun was found at the home of Lawrence City Councilor Grisel Silva, the Massachusetts State Ethics Commission has cleared the district “B” councilor of allegations that she used her influence as an elected official to cover up the fact that a gun was found in her home.

The gun was found by a family member in the bedroom of Silva’s 17 year old daughter, Tatiana Colon, who has learning disabilities.

In a press release issued after the incident, Councilor Silva stated that her husband Nelson, had called Lawrence Police Officer Albert Inastroza, whom they both knew, when a member of the family brought the gun to his attention. The Silvas say they handed the gun over to Inastroza with the belief that he would turn in the gun and begin an official investigation.

But Inastroza did not turn in the gun right away, nor did he file a police report, setting off a firestorm of accusations in the local press that Silva was taking advantage of her position as a city councilor by calling a “friend” on the police department to cover up the crime.

Inastroza was suspended for twenty-days by Lawrence Mayor Michael Sullivan for not filing a report or turning in the gun “right away,” despite the fact that there is no official policy as to when an officer has to turn evidence in to the police station during an ongoing investigation.

Inastroza finally did file a police report several days after the incident, and after an internal investigation had already begun. In his report, Inastroza claimed that Councilor Silva and her husband had asked him not to turn in the gun until he heard from them.

The daily and weekly newspapers reported the allegations against Silva as gospel while the Lawrence Police Department continually questioned and investigated Silva’s daughter, Tatiana Colon for gun possession.

Colon was charged with illegal possession of a firearm after a magistrates hearing in Lawrence District Court. She pleaded innocent of the charges and an arraignment was held before Judge Brennan, who continued the case without a finding and ordered Colon to serve six months of unsupervised probation.

Based on press accounts and an anonymous complaint to the Massachusetts State Ethics Commission an investigation began into Silva’s role in covering up her daughter’s gun possession.

Silva testified before the Commission in April where she continually denied any involvement, saying that her husband made the call to Inastroza and that she never handled the gun nor did she ask Inastroza not to turn it in.

“Most parents, if they found out that their daughter brought home a gun would have thrown it away and not told anyone,” Silva told the Valley Patriot. “We didn’t do that. My husband called a police officer to investigate where the gun came from and to scare the fear of God into our daughter. Ever since then, and because of politics, we have been under a cloud of suspicion. I have never used my position as a city councilor to get favors from anyone, especially law enforcement,” Silva concluded.

Silva says that the news that she has been cleared by the Ethics Commission vindicates what she has been saying all along, “All I have heard since this incident began is how I am some corrupt politician who abuses her office. My political adversaries have been having a field day in the press and on the radio giving out misinformation and outright lies about what happened in this case. The fact is, my daughter found a gun, we called a police officer, we cooperated with the Lawrence police during the investigation, and we never tried to cover up anything.”

“My Family and I are very happy that this is over and hopefully it marks the end of all the false allegations and the disinformation campaign against my husband and me, Silva said.

“It has really been an honor and a privilege to be a Lawrence City councilor and it really hurt me that people could think that I would do something to dishonor the voters who put me here.”

Silva says that the ordeal was toughest on her family, “my family has gone though an awful lot because they are related to an elected official and they don’t deserve that. The irresponsible accusations that have been made and the one sided reporting by the Eagle~Tribune took a real toll on them, but now we will be happy to move on and concentrate on making the city of Lawrence a better place to live.”

The Massachusetts State Ethics Commission began their investigation on January 24th of this year. According to records obtained by the Valley Patriot the commission “conducted a preliminary inquiry pursuant to section 4 of G.L. c. 268B into whether you violated the conflict of interest law … [i]n particular, the inquiry focused on allegations that you knowingly or with reason to know use or attempt to use your city council position to have a police officer fail to take timely and appropriate actions concerning a gun possession incident involving your child, an unwarranted privilege of substantial value not properly available to similarly situated individuals.”

According to the Ethics Commission records, they met in executive session on July 25th of this year and voted to terminate the inquiry. “This ends the commission’s inquiry and all records shall remain confidential,” the records state.

Silva is a candidate for reelection in the fall and says that the timing of the Ethics Commission ruling may take the wind out of the sails of her critics and her opponent.

“Up until now they thought they were going to be able to continue a campaign of disinformation and campaign against me in the fall saying that ‘Councilor Silva is corrupt and under investigation by the Ethics Commission.’ Now they won’t be able to do that. Now they will be forced to campaign on the issues that affect the people of my district and that benefits everyone. I am very proud of my record on the council and whatever the voters decide I will respect that, I am just glad they will now be making that decision based on facts instead of lies and false allegations.”