Lawrence Mayor Willie Lantigua issues statement regarding the firing of Eagle Tribune publisher Al Getler saying that Getler was not ethical and purposely tried to discredit the image of the City of Lawrence. The Valley Patriot reported yesterday that Getler has been fired as the publisher of Eagle Tribune Publishing and former VP Karen Andreas has replaced him.

“It is with great hope that I inform the residents, business owners and those who care so deeply about our Great City of Lawrence that a new day may be on the horizon for all of us.” Lantigua’s statement leaked to the Valley Patriot stated.

“Today Eagle Tribune Publishing Company announced the abrupt departure of publisher Al Getler. For the past six years, Al Getler has worked to discredit our community, our residents and our image as a whole from behind his desk in North Andover,” the letter continued. 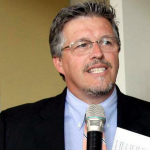 Lantigua closes his letter, yet to be released, saying he will “reach out” to Karen Andreas the new publisher and thanked all those who have “taken the time to write and reach out to “the powers that be” calling for equality and ethical journalism….”