By Tom Duggan on July 7, 2012Comments Off on Lawrence’s New Image?

The city of Lawrence was featured on the front page of a national magazine last month where beautiful women were shown posing at the Lawrence Fire Stations Engine 5 on Lowell Street. The models were photographed with a Lawrence fire truck, trying on fire uniforms and parading around the fire house in sexy outfits.

The magazine is called “Candela” (Candelamagazine.com) a Spanish language magazine that features scantily clad women on nearly every page, touting what kind of men they are looking for, their likes and dislikes and profiles of the gorgeous Latinas.
Inside the magazine the images were used for a full page centerfold advertisement for “Coors Light” complete with a calendar as well as a few other photos with sensational model Jessica Graf with Lawrence Fire equipment.

Last month, Bergeron says he approved the photo shot with “Candela”, adding that he believes it is a creative way to help change the city’s image.

“The models and photographers just showed up at Engine Five one day,” a Lawrence firefighter told the Valley Patriot, asking not to be identified. “The guys had no idea what was going on, we came to work that day with no advanced warning, but we were told that the chief approved it,” he said.

Chief Bergeron says the move is good for Lawrence and its image, telling The Valley Patriot that he believes improving the fire department’s relationship with such magazines gives him, and the city an opportunity to educate the public and boost the city’s terrible public image.

“I often get phone calls to do this sort of thing,” Bergeron said. “I got a phone call last spring that a photographer-artist was doing a piece, for Bread and Roses, for example, and wanted to take a group picture with the guys.

There was one I tried to push off with Dunkin Donuts and I was caught off guard. There was one that a few of the other firefighters did, a commercial I think, that ran during the Superbowl or one of the Patriots playoff games.

People often come by with cameras to the fire house and we always try to be as accommodating and outgoing, as non exclusive as we can be.”

But Lawrence City Councilor Marc LaPlante says he thinks, as well intended as the chief may have been, he believes it’s bad for the city’s image.

“My concern is that this is an inappropriate use of city equipment on city owned property,” LaPlante said.

“Additionally, it demeans the seriousness of the Lawrence Fire Department. The LFD is made up of proud professionals, and to use the equipment and uniforms in the manner portrayed in the magazine does a disservice to the department and its personnel. This use of LFD equipment and uniform crosses boundaries that I expect Mayor Lantigua to uphold.

Apparently, there are no written policies that provide guidance as to how the uniform and equipment may be used. However, Mayor Lantigua must show leadership and work with the fire chief to put proper policies in place to ensure that when questions and requests regarding the use of the fire (and police) equipment and uniform are made, that the city adheres to policies that are a credit to our important institutions rather than cheapen them.”

LaPlante said that a recent and similar development with Holyoke Fire Department led to personnel actions against that city’s deputy fire chief.

“This indiscretion is not the crime of the century, but provides Mayor Lantigua an opportunity to exhibit leadership by demanding that the use of the Lawrence Fire Department equipment, property, and by extension its reputation, be held to the highest standard.”
Chief Bergeron disagreed.

“In this particular case we got a call from a magazine to come down to firehouse and take photos with the equipment.”
“I said, ‘as long as it’s decent I have no problem with it.’

I have been getting comments in the past few weeks about it concerning what has appeared and to be honest with you I hadn’t even seen the magazine or the photos until I was in Boston earlier in the week and I got comments on it. 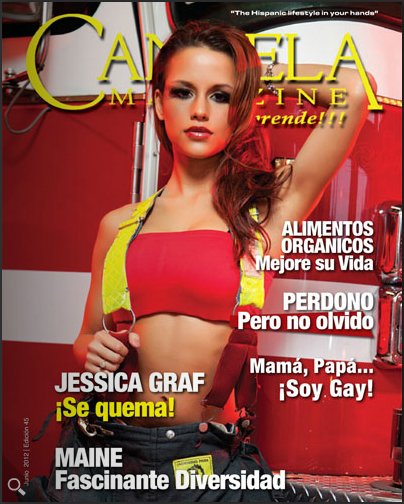 When I did look at it on the net, it was difficult for me because what I saw was all in Spanish. I don’t understand Spanish that well but they seemed to highlight what’s going on in Lawrence, the night life, the night clubs, the culture. So I was hoping to leverage this relationship with the magazine to the point where it will open some doors to me,” he said.

“Some night clubs in Lawrence are great as far as keeping a nice establishment, for example. But with others we’ve had ongoing issues that need to be resolved. Contrary to what some people believe, we are not trying to put anyone out of business. We just want them to prosper and just be as safe as possible.

So, I am looking at this as an excellent opportunity to establish a dialogue with night club owners, the managers and patrons. I mean, let’s face it, its part of the Spanish culture and bringing good publicity on the city promotes the city and brings money in.
The fact that Lawrence is highlighted in magazine I am hoping will bring in more communication with these people to make them understand what they need to look for when they walk into the door of a night club, you know, looking for where the exits are when they walk in and how to get out in case of a fire.

I try to be as open as I possibly can. People come to the fire house to see what we are doing all the time and I always say ‘go ahead we have no problem with it.’”

Asked if this particular magazine shoot was initiated by Mayor Lantigua or his administration Bergeron said it wasn’t.
“No, it was my call.

You know, there was one instance where, after the Dunkin Donuts commercial aired, we got a call from a production company for Wendy’s and they were talking about substantial numeration [payments] for individuals on the department to be in an ad. Because there was money involved I ran it by the mayor but in the process of trying to get it approved, Wendy’s got tired of waiting for a response.

By the time I got back to them they made the decision to go to Lowell instead of Lawrence.

To me that was no big deal because we are not in that business. We are in the business of protecting people from fire. Any time anyone comes to the fire house I see it as an opportunity to educate people about fire. 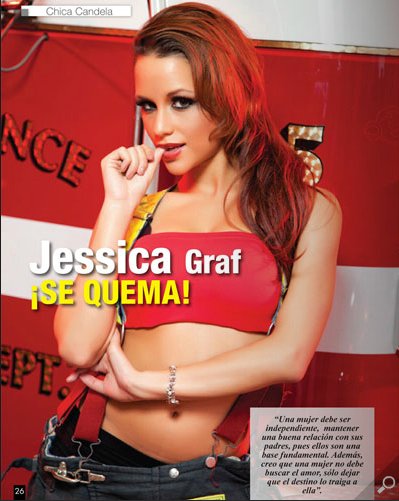 We might be able to do something really good with this,” he continued. “I plan on contacting the editor and publisher of Candela magazine and to possibly have them run a story about night clubs and what people should be looking for, what they need to be aware of for their own wellbeing when they come into one of our nightclubs in the city.

And because they are also an on line magazine, I am even going to ask things like, can they put a up a YouTube link of the video of the Station Night Club disaster.

As with most things, when it comes to fire service, disasters like that are what cause or bring about major changes in fire prevention laws. I see our relationship with anyone in the media as a chance to do that.”

Bergeron said neither the city nor any individuals on the department were paid for the “Candela” magazine shoot.

“It was just for exposure, it was just to help the city, that’s why I said yes when they called.”

Bergeron admitted some of the reaction he got after the magazine came out was not so positive, but defended his decision saying he saw nothing wrong with the photos.

“Some people did say they thought it brings down reputation of the department. But I looked at the pictures, there’s a beautiful woman in firefighter gear she is not in any way naked or doing wrong.

The point I am trying to make, I guess, is that I am in the city all time. What you see walking down the streets every day in Lawrence is not much different from what I see in those photos, its part of their culture. “

Bergeron said that Mayor Lantigua has been “very gracious to me. Everything I have asked he has gone along with.”

Tom Duggan is President and Publisher of The Valley Patriot, Newspaper, a former Lawrence School Committeeman, the former political director for Mass Citizens for Marriage, a 1990 Police Survivor and hosts The Paying Attention! Radio Program on 980-WCAP in Lowell.  You can email your comments to valleypatriot@aol.com .