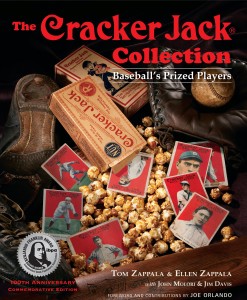 Peter E. Randall Publisher is pleased to announce that the newest book by Tom Zappala and Ellen Zappala, The Cracker Jack Collection: Baseball’s Prized Players, was awarded a silver medal at the IBPA Benjamin Franklin Awards ceremony at NYU’s Kimmel Center in New York City on May 28, 2014.

The Independent Book Publishers Association (IBPA) annually recognizes excellence in book editorial content and design with their prestigious Benjamin Franklin awards. These awards, which include fifty-two categories, are regarded as one of the highest national honors for independent publishers.

A silver medalist in the sports book category, The Cracker Jack Collection: Baseball’s Prized Players was recently released nationally by Peter E. Randall Publisher to excellent reviews. The book focuses on the lives of the players featured on baseball cards used as prizes in Cracker Jack® boxes in 1914 and 1915. Now 100 years old, these cards have become extremely collectible and valuable. The players featured in the book range from some of the best in the game like Eddie Collins, Ty Cobb and Honus Wagner, to lesser-known players like Cuban-born Armando Marsans, a talented player who made fine cigars.

Published as a celebration of the 100th anniversary of the Cracker Jack Ball Player card set, this beautiful hardcover coffee table book is filled with full color images of the original Ball Player cards, Cracker Jack prizes, and other baseball memorabilia from the era. The player stories included in the book give the reader a glimpse into the lives of the men who shaped our National Pastime.

Written by Tom and Ellen Zappala of Merrimac, MA, with contributions by Methuen, MA, writer John Molori, PSA president Joe Orlando, and Cracker Jack historian, Jim Davis, The Cracker Jack Collection: Baseball’s Prized Players not only details the personal and professional lives of the players that make up the historic Cracker Jack Collection, but also discusses the history of the Cracker Jack product and its close connection to baseball. The book is available on: www.crackerjackplayers.com, amazon.com, and barnesandnoble.com.

The Zappalas also authored the award-winning baseball book, The T206 Collection: The Players & Their Stories, and co-authored Nardo: Memoirs of a Boxing Champion, the autobiography of former Welterweight Champion Tony DeMarco.